February 21-24, 2013 – Nothing Dramatic … Enjoying the Sun and Warmth of Southern Florida

We had a great breakfast of juice, coffee, fruit, mimosas and homemade quiche and coffee cake with Lynn and Frank Fowler this morning.

Early afternoon, we participated in a scavenger hunt, finishing second.

This evening, we had dinner with Gail Graham Lee (a high school classmate of mine) and her husband, Dick, at Blue Provence in a quaint section of Naples. 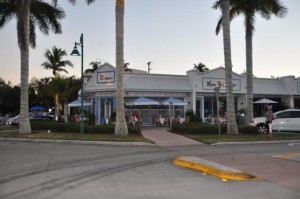 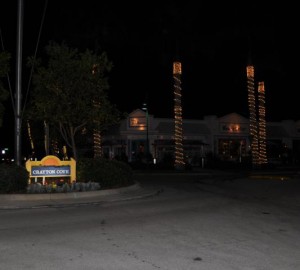 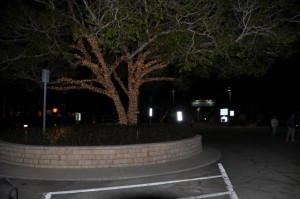 and then down along some of the city boat docks. 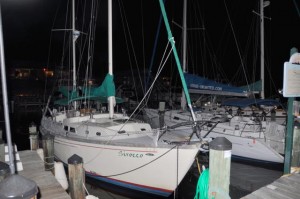 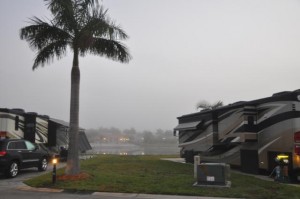 While Debbie was at her Jazzercise class, I biked home via a different route, stopping a Serenity Walk, at nature reserve.  It was an incredibly quiet place, even the birds were silent. 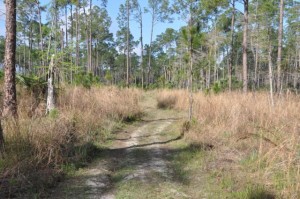 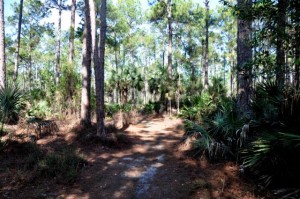 At one curve in the trail, I startled a black snake which disappeared into the grasses before I could get a shot off with my camera.

This afternoon, despite the temperatures, which in the sun hit 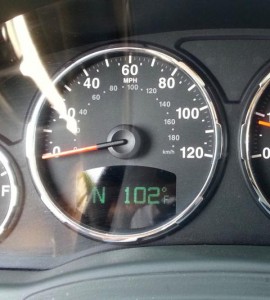 we traveled a few miles down the road toward Marco Island to attend an RV show … luxury Class-A motor homes ranging in price from $360,000 (for a six year old coach) to more than $1.7 million

At 4:00 PM, the weekly “Meet and Greet”, with its courtesy wine, beer and huge buffet got underway, after which dancing until we got too tired.  Rumor has it “someone” actually briefly danced on a table.

We left bright and early this morning to drive to Venice where I was playing golf at Sarasota National with Ken and a friend of his, Jim.  While I had four really awful holes, I also had four pars and broke 100 for the first time in a couple of years.

Meanwhile Debbie went with Cheryl and Jim’s wife, Sue, to tour the John and Mable Ringling Art Museum and Mansion 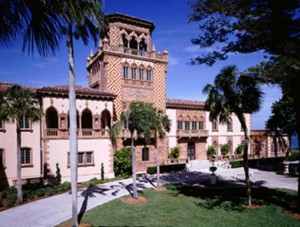 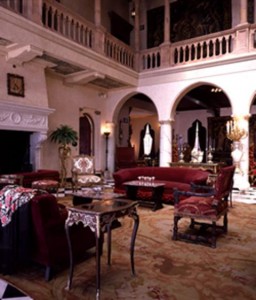 which she told me was beautiful and to which Cheryl had passes.  They even had a special guided tour of the house.

The Ringlings’ dazzling palatial mansion is a tribute to the American Dream and reflects the splendor and romance of Italy. Described as “the last of the Gilded Age mansions” to be built in America, Ca’ d’Zan has 56 incredible rooms filled with art and original furnishings. With its Venetian Gothic architecture, the mansion is a combination of the grandeur of Venice’s Doge’s Palace, combined with the gothic grace of Cà d’Oro, with Sarasota Bay serving as its Grand Canal.

In 1924, construction began on Ca’ d’Zan, which means “House of John” in Venetian dialect. The house was completed just before Christmas 1925, at a cost of $1.5 million.

John and Mable Ringling greatly admired the unique architectural style of the Danieli and the Bauer-Grunwald hotels in Venice, as well as the palaces that face the Venetian canals. This architectural style, called “Venetian Gothic,” greatly influenced the Ca’ d’Zan’s design, which architect Dwight James Baum and builder Owen Burns helped bring to Sarasota for the Ringlings.

Mable Ringling had an oilskin portfolio filled with postcards, sketches, photos and other materials that she gathered on her travels to aid the architect with his design.

Ca’ d’Zan is 200-foot long encompassing approximately 36,000 square feet with 41 rooms and 15 bathrooms. The structure is five stories and has a full basement. The pinnacle of the structure is the 81-foot Belvedere tower with an open-air overlook and a high domed ceiling.

Ca’ d’Zan is constructed from terra cotta “T” blocks, concrete, and brick, covered with stucco and terra cotta, and embellished with glazed tile. The original roof was made from 16th century Spanish tiles imported by the builder Owen Burns. The bayfront terrace is made of domestic and imported marble.

In April 2002, comprehensive restoration and conservation was completed on Ca’ d’Zan. The six year, $15 million initiative restored the mansion to the era of Mable Ringling.

After showers back at Ken’s and Cheryl’s we had dinner in Sarasota before the two-plus hour drive back to Naples.

After the regular Sunday pancake and sausage breakfast, we spent most of the day doing little of note other than a short bike ride, some quick shopping and played a few games of gin rummy.  Too hot even for the pool.