I guess we spoke to quickly about PEI police.  No sooner had we left our campground this morning that we passed our first police car.  Fortunately, Debbie was driving well under the sped limit.

Our trip took us onto the eastern third of the island today under bright sunny skies (although there were some high cumulus clouds which moved in later in the day).

Our first destination was Greenwich National Park on the north shore of the island, about which we’d heard great things. We were not disappointed.  Once there, we walked a path paralleling St. Peter’s Bay, and passing two enormous birch trees which date back to the turn of the century when the land was still being farmed.  The trail then forked through a thick fir and spruce forest before emerging onto a floating wooden walkway 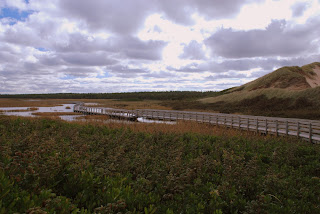 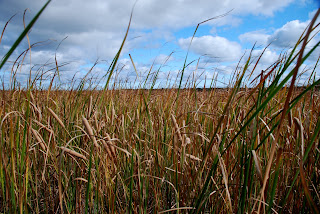 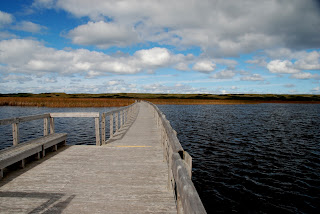 before a trail rises through sand dunes 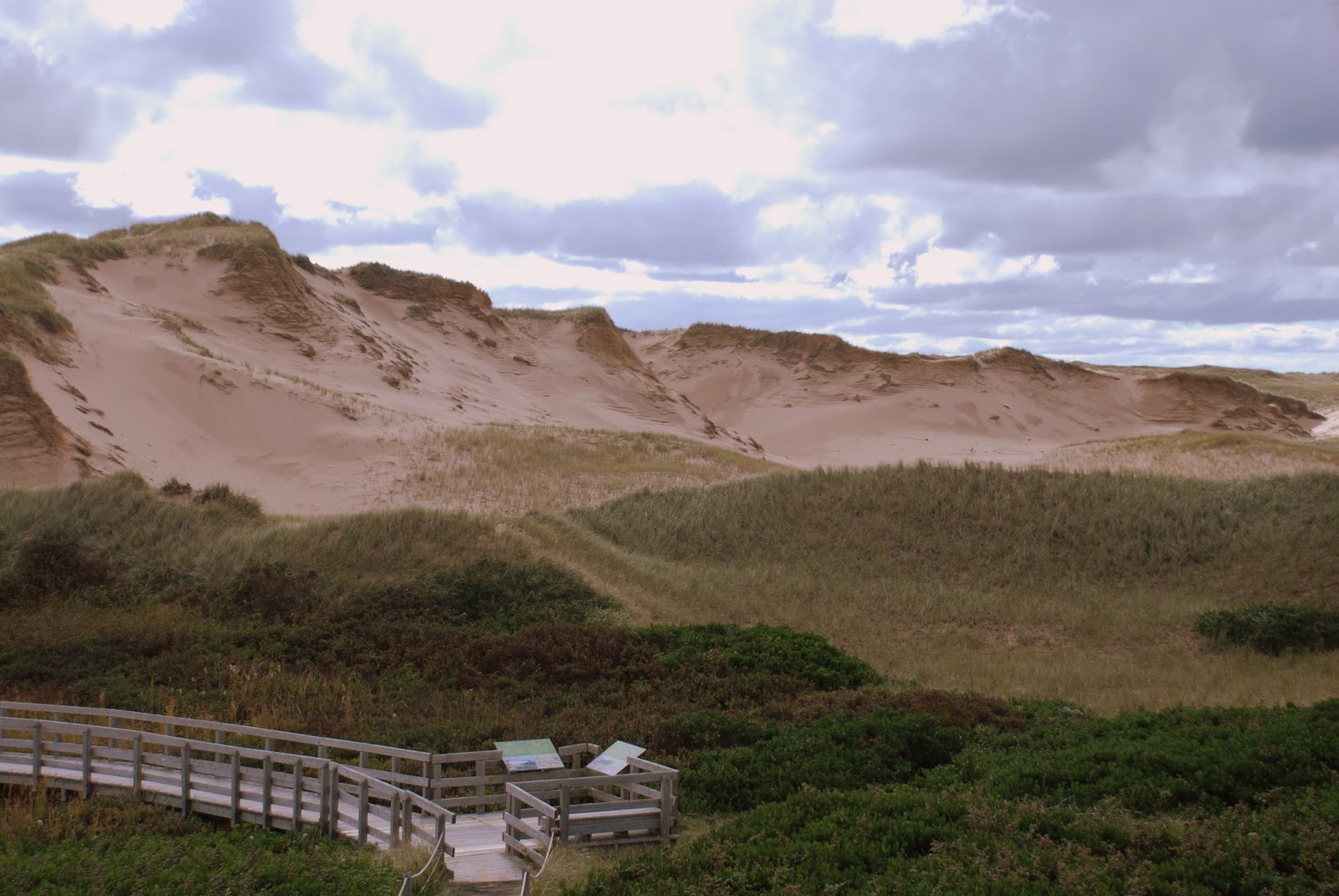 and finally descending to the shore of the Gulf of St’ Lawrence. 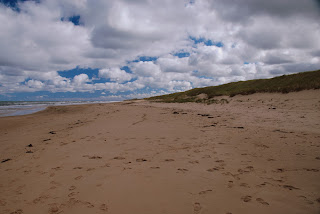 From there we continued north east along the shore road.  Our next stop was at the small fishing village of Naufrage, most notable for Shipwreck Point Lighthouse.

As we passed through what the map purported to be the centers of towns/villages along our route of travel, we discovered that many were, at best, mere road junctions … with nary a gas station, post office or even a home in sight! 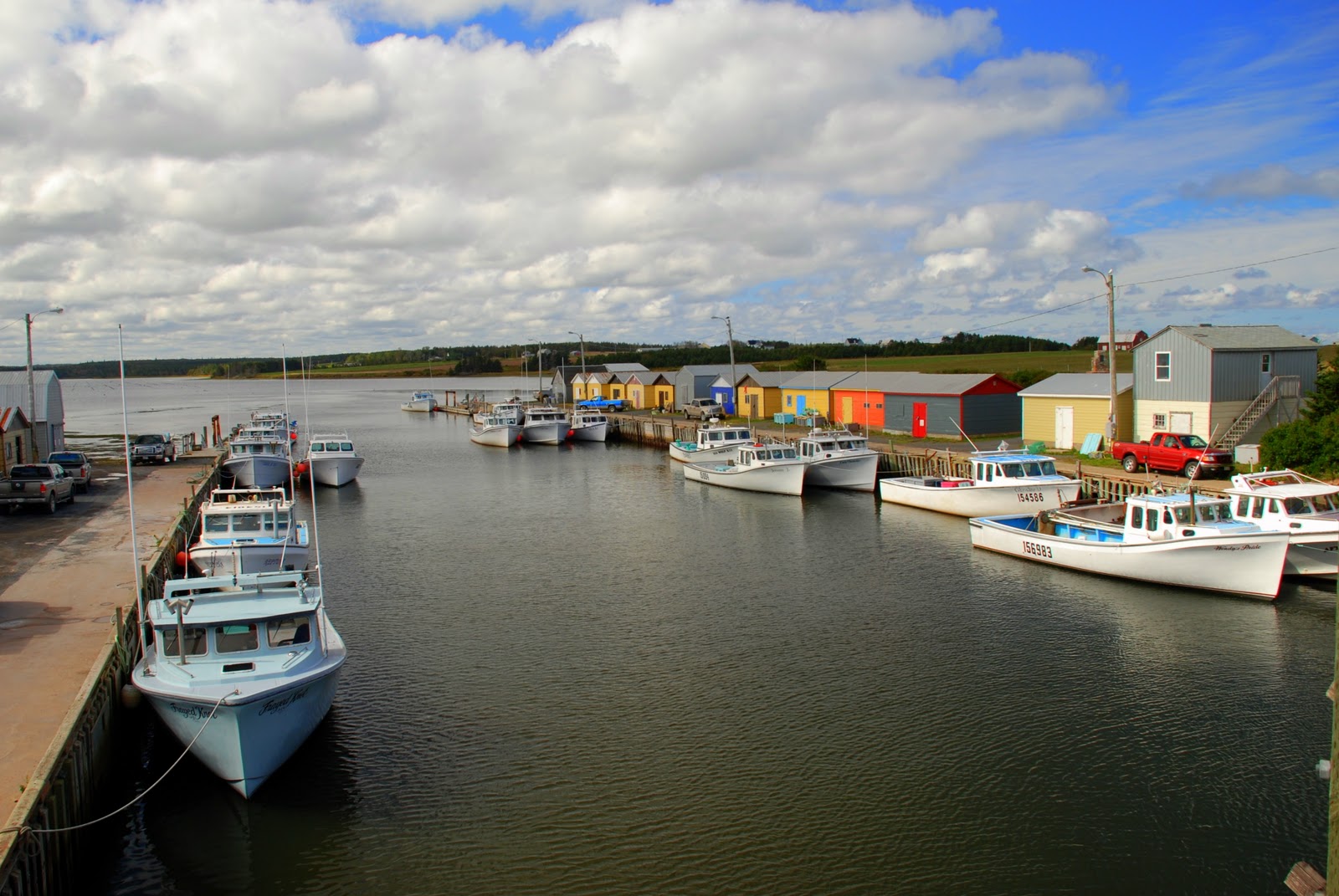 (incidentally, the colorful sheds are where the fishermen store their traps, nets and other gear, at least during the season) 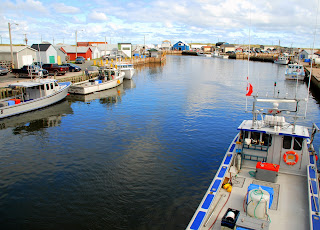 we discovered it bills itself as “the Tuna Capital of the World”‘ and at the time was hosting an international tuna competition with participants coming from as far away a Germany.

From there it was only a few miles to East Point, the most easterly end of PEI. Having also visited North Cape the day before, we were awarded a Tip-to-Tipcertificate. Other than a lighthouse, badly in need of a paint job, 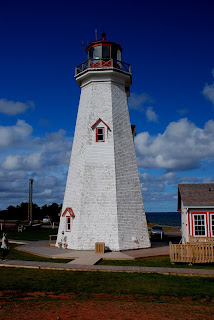 a short but steep, red rock cliff descending into the water 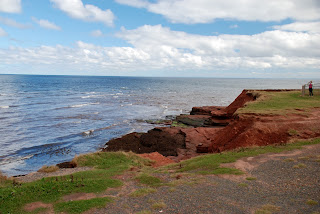 and a view of Cape Breton Island, Nova Scotia (where we plan to be the day after tomorrow) in the distance, there isn’t much else to see.

The drive down the southwestern side of the peninsula actually provided more enjoyable scenery with frequent vistas of large farms and the ocean.

Our trip “home” took us through the center of the province’s capital, Charlottetown.  There we stopped by St. Dunstan’s Basilica, another architecturally remarkable Catholic Church. 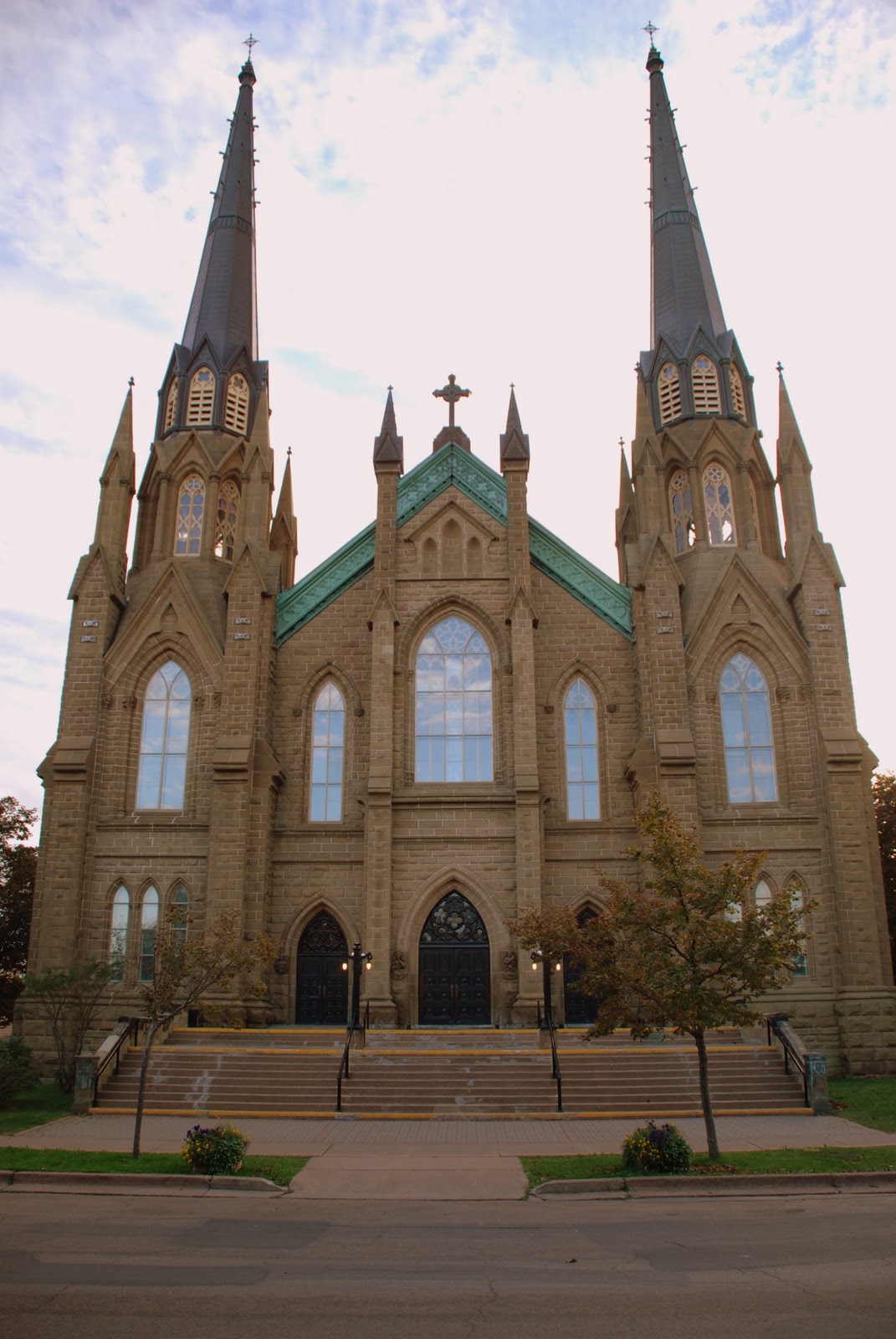 Some final observations on PEI …

1.  In addition to cattle we saw many horses across the island, some used for horse pulls, some for sulky racking and others for pulling “rakes” for harvesting of seaweed. 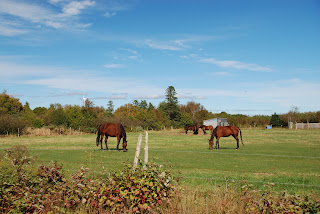 2.  There are many “For Sale” signs for both residential and commercial properties.  Yet, with only a few exceptions, even these properties are neatly maintained.

3.  For visitors, the road signage is as good as anywhere we’ve traveled.

4.  Aside from the fragrant firs and spruces, there are many beautiful stands of white birches, which are sadly dying out in many places in the US. 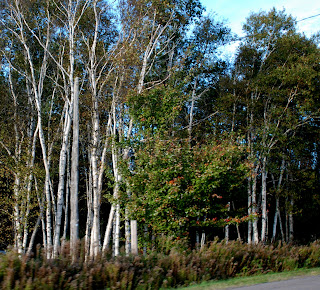 5.  I’ve mentioned the number of churches on PEI,  Well, there are at least as many, if not more, cemeteries; between fields or residential properties, surrounded by trees and even in “Vs” between road intersections …and all are well mowed and maintained.

6.  For all the pristine landscaping, other than on come larger commercial properties, there is a noticeable lack of the use of mulch, despite the timber industry on PEI.

7.  As the fishing/lobstering season ends, scores, if not hundreds of the island’s fishermen have have their boats and traps trucked to their homes where they sit until spring. 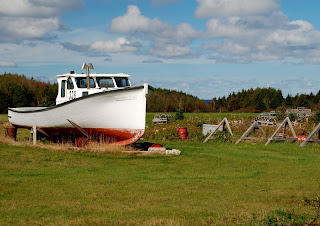 8.  We did see a red fox, the island’s top predator, but unfortunately were unable to snap a picture.

9.  As it is fall, farmers are cutting and bundling hay.  On PEI, they roll the bales, stack them end-to-end and then wrap the long rolls in plastic; sometimes extending over one-tenth of a mile in length. 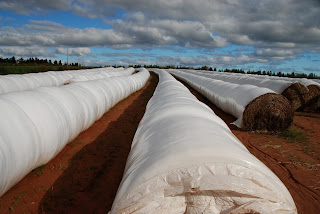 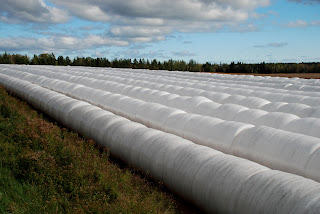 Just before getting back to our campground, we were rewarded with the first sunset we’d seen since before leaving Pennsylvania. 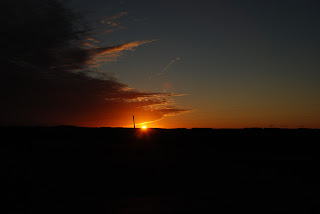 Debbie and I truly fell in love with PEI  Although it is a long way from where we live and we have other extensive travel plans, we hope to someday have the opportunity to return to this beautiful and friendly island for a longer stay.