Today, we decided to take a local road trip north of the city, with both Montmorency and Canyon Ste.-Anne Falls as our primary destinations.  However, a funny thing happened on the way to the Canyon, about 5 miles before getting there, we entered Saint-Anne Beaupre.  On our immediate left was a spectacular edifice … Sainte-Anne Basilica.

This church was named for Sainte-Anne, purportedly the mother of Jesus’ mother, Mary.  It is an enormous and truly spectacular structure!

Statue of Ste.-Anne atop the Church, between the steeples

Entrance (no two of the columns caps are alike)

Stained-Glass Window over the Entrance

One of several chapels on the lower level

Replica of Pietà by Michelangelo

After a lengthy and awe inspiring stop we went to Canyon Ste.-Anne Falls where the water tumbles nearly 500’ through a narrow gorge carved out from rock which dates back 1.2 billion years. 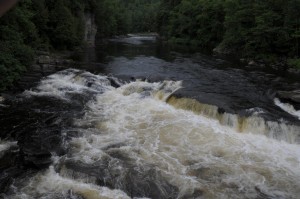 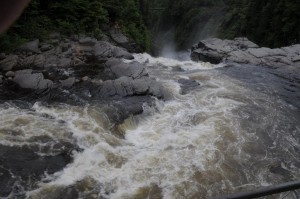 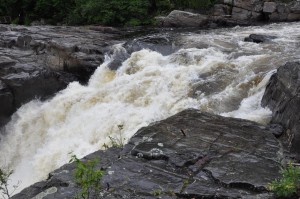 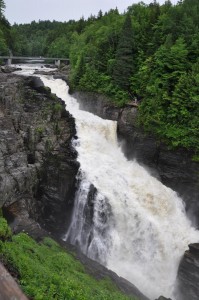 We also got to witness some adventurous rock climbers climb down into and out of the canyon. 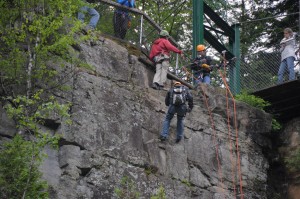 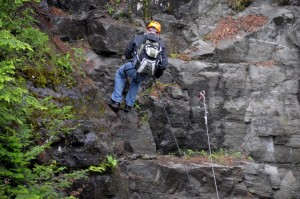 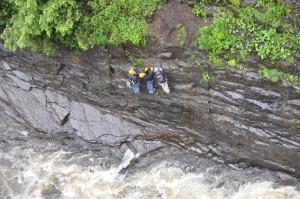 Had we been brave enough … which we aren’t … we could have taken a Zip-line across the canyon from a height of almost 200’.

Heading back past Saint-Anne Beaupre, we dodged the rain and stopped to photograph several more churches before reaching Montmorency Falls, at 272’ high it is almost 100’ higher than Niagara Falls. 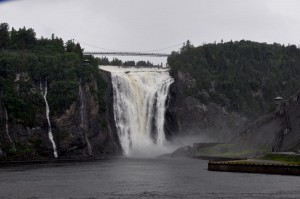 We did stumble across one very cute sign at a restaurant at the summit of the bluff over which Montmorency Falls flows. 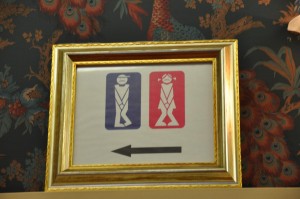 Our next stop was the Île d’ Orleans, 32 miles in length long island and situated in the middle of in the St. Lawrence River about 20 miles north of Québec City.

The drive around the island takes between two to three hours and runs through several small villages.  Aside from having a feeling of stepping back in time, wineries, small farm-stands peddling strawberries and churches provide the highlights.  Of these, the Church of Sainte-Famille, the oldest parish on the island dating back to 1666, was the most interesting.

It is also unusual in having three spires, each with a bell

Nave, looking back toward the entrance

Throughout the island, the roof lines of most of the homes have a distinctive shape and the vast majority of buildings have red metal roofs.

Oh, yes, there was some wildlife for a change …

We also saw many presumably private crosses and many small (shed-size) structures whose functionality has stumped us.  They always seem to be set just off the road’s right-0f-way.

Our drive back to our campground went well … except for two accidents which tied up the evening’s rush hour traffic. 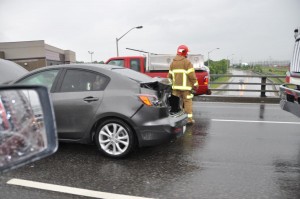