Anna Eleanor Roosevelt, a shy, awkward child, starved for recognition and love, matured into a woman with great sensitivity to the underprivileged of all creeds, races, and nations. Her constant work to improve their lot made her one of the most loved–and for some years one of the most revered–women of her generation and the most influential woman in America.

Born on October 11, 1884, she was daughter of lovely Anna Hall and Elliott Roosevelt, younger brother of Theodore.  When her mother died in 1892 and her adored father died only two years later, her grandmother sent her to a distinguished school in England gave her, at 15, her first chance to develop self-confidence among other girls.

Tall, slender, graceful of figure but apprehensive at the thought of being a wallflower, she returned for a debut that she dreaded. In her circle of friends was a distant cousin, handsome young Franklin Delano Roosevelt. They became engaged in 1903 and were married in 1905, with her uncle, the President Teddy Roosevelt, giving the bride away. Within eleven years Eleanor bore six children; one son died in infancy.

Franklin Roosevelt met Lucy Mercer 1913 after Eleaanor hired her as her personal secretary.  FDR's romantic relationship with Lucy is beleived to have begun in 1916.  Roosevelt’s secret affair with Mercer was derailed when Eleanor unpacked his luggage after a trip and found numerous love letters between her husband and her secretary. She reportedly then offered Franklin a divorce. But his mother Sara Delano refused to let them part, saying she would cut Franklin off if he got divorced.

When they couldn’t divorce, Eleanor insisted Franklin promise her two things: They would never share a bed again, and he would stop seeing Lucy Mercer.  However, the became a powerful political force with many of Eleanor's progressive agendas helping shape many of her husband's liberal programs.

While he allegedly kept the first promise, Mercer remained a constant in his life for 30 years and was never out of the picture.

Late in the summer of 1924, dwhile picnicing at one of the family’s favorite spots next to the small Valey Stream (Val-Kill in Dutch), 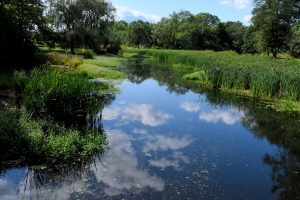 Eleanor lamented that she and her friends from the Democratic State Committee would not be able to come to Hyde Park after Sara Roosevelt closed the big house for the winter.  Franklin suggested that she and her friends build a cottage nearby, where they could visit year-round. Eleanor and her two closest friends, Nancy Cook and Marion Dickerman, enthusiastically accepted the offer. 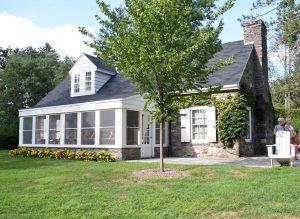 In 1926, the three women, along with Caroline O’Day, another friend from the Democratic State Committee, established an experimental furniture factory at Val-Kill. 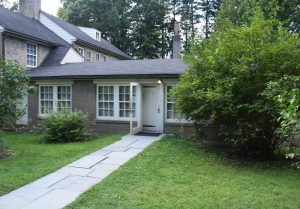 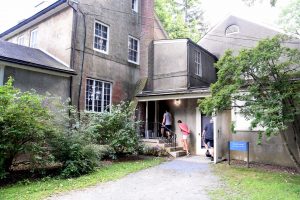 They hoped to train local people in craft skills that they could use to supplement their income from agriculture without having to move to the city.  The high quality reproduction Early American furniture Val-Kill Industries produced did well in the 1920s.  The original two-story factory acquired a number of additions, including a forge, whose purpose was to create reproduction pewter pieces.

It was a Val-Kill that Eleanor tested her progressive ideas, discussed controversial issues and inspired stuedents and civil rights and labor leaders.

After Franklin's death in 1945, Eleanor moved to Val-Kill from Springwood. 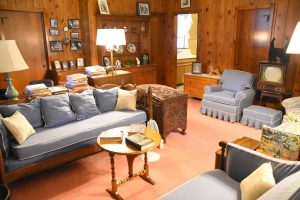 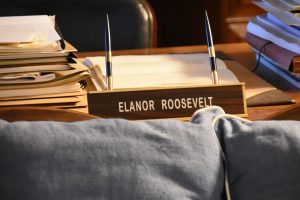 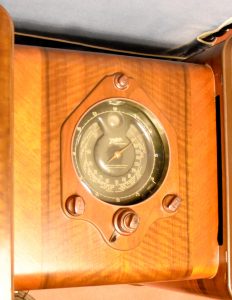 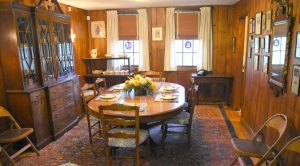 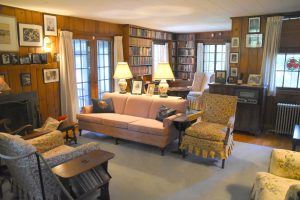 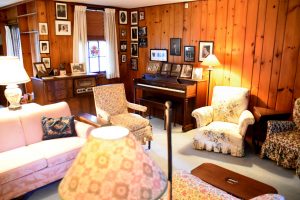 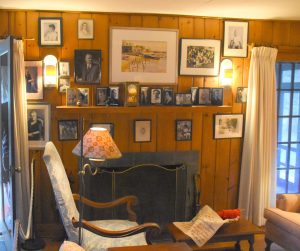 Eleanor's favorite chair beside the fireplace 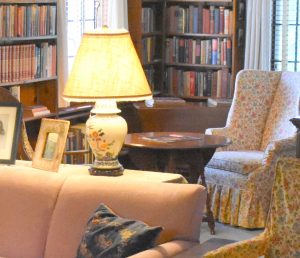 In this corner, Senator Jack Kennedy sat in the lower wooden chair (behind the lamp) as he pleaded with Eleanor (seated in the higher arm chair), for her endorsement in his 1960 run for the presidential nomination.

After Eleanor's death at age 78  in1962, Val-Kill was eventurally sold to the National Park Service.