This past Wednesday we were able to get together with Ken and Gloria Simonsen, RV friends from our winters in Naples. One of the joys of our RV lifestyle are the many wonderful and lasting frinedships we've made.

Leaving Hilton Head Island on Thursday morning, we were glad to be heading west and not tied up in the nearly 5 miles of mostly commuter traffic heading over the bridges and onto the Island. 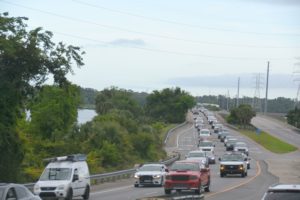 Then, again,we spotted one couple who seemed to be making better time than the frustrated morotists caught in the line of traffic. 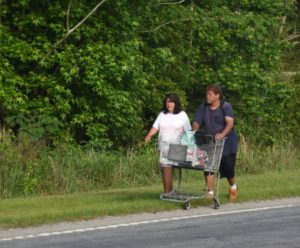 Our drive to Wade 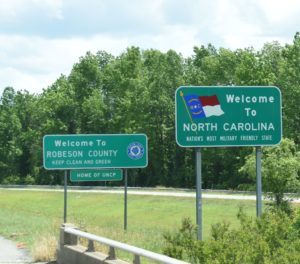 was uneventful, although we did notice several signs which had been bowled over, 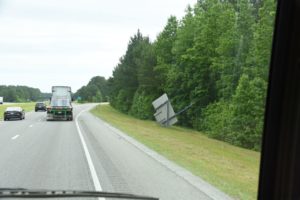 althogh there were no wheel/skid marks, making their demise a mystery.

Then there was the SUV which passed which looked like it had contracted a case of sticker measles. 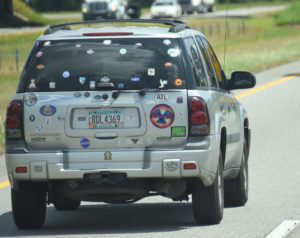 Our afternoon and evening was spent in the shade of a huge oak tree. 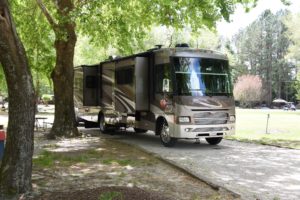 Friday, we drove just over 200 miles to Ashland, VA.  Along the I-95 corridor the results of First Lady BIrd Johnson's highway beautificaiton program were in full bloom, 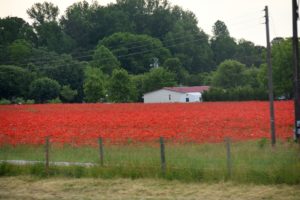 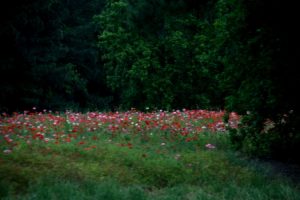 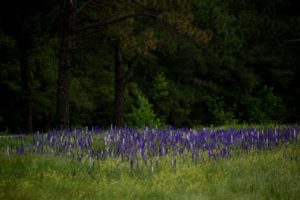 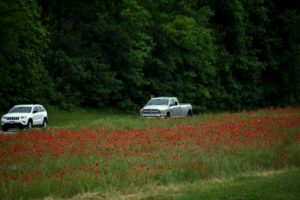 Other flowers were not planed by humans but battled their way through man-made walls to further brighten otherwise boring sections of the highway. 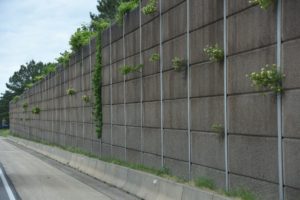 Most everyone has experienced lane closures while driving.  As frustrating as the delays might be, when you pull over into the merge lane … only to have car after car shoot up past you in the lane you just exited can raise one's ire and result in a series of silent epithets about the offending driver.  However, one pick-up truck pulling a trailer just ahead of us finally had enough 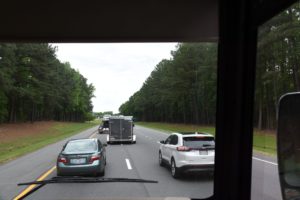 and pulled out blocking those inconsiderate drivers from speeding past only to cut in to the merge lane at the last moment. 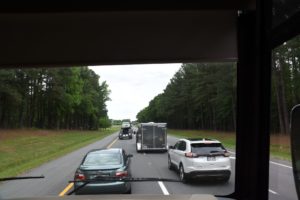 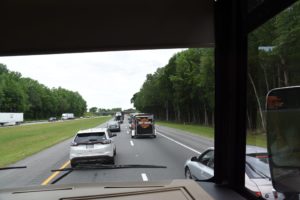 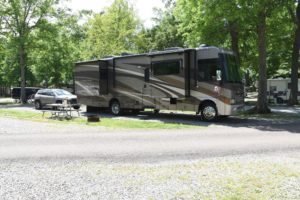 and where we've met several other people returning home from trips to the Carolinas, Georga and Florida.

As you may have read in prior posts, we have had maintenance issues from time to time, most of which were successfully resolved by fixed site or mobile service operators.  The RV on one side of us obviously has had a bad experience with one such RV dealer (one with whom we have had generally good experienes). 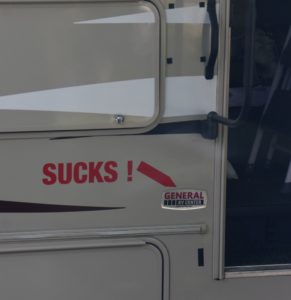 With the threat of rain along our route home, we left the campgorund early, got gas locally and were on the highway by 7:05 this morning. 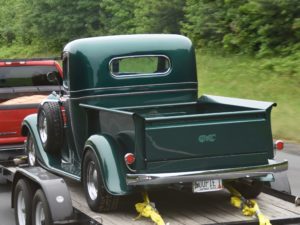 before hitting traffic just south of Washington … albeit the "crash" was not on I-95 and the traffic brike up before we even reached MD-295.  It appeared to be one of those frustrating situation where by the time you reach the end of the traffic holdup there is no apparent reason for it. 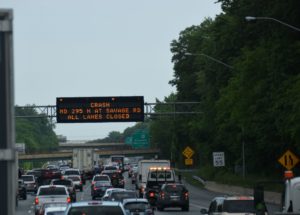 Debbie's only "old barn" photo of this trip. 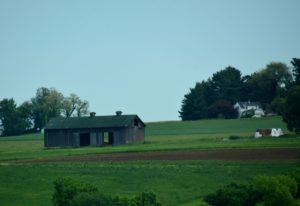 We did love one overhead sign all along I-95 in Maryland; apropros as tomorrow is Mother's Day 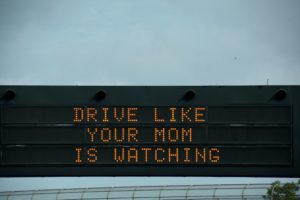 Tightly gripping the steering wheel and laser focused on the road and traffic while crossing the Francis Scott Key Bridge in Baltimore, 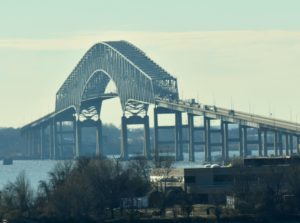 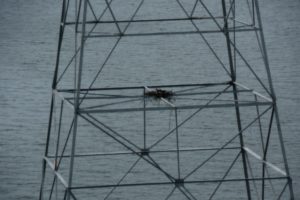 and lone sailboat headed beneath the bridge. 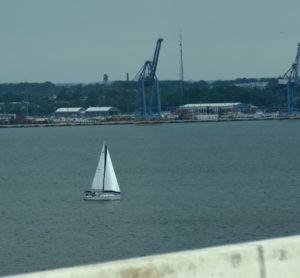 However, our only real slow down was in Philadelphia where four lanes of traffic were being squeezed down to just two. 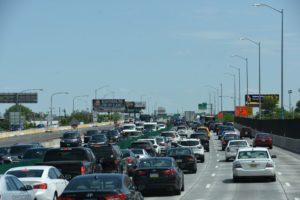 All in all, this was the quickest trip we've ever made from Ashland, VA to Langhorne.  Once home, however, we still faced a 3 hour challenge of unloading food, clothes, other things we take with us but don't leave aboard and, of course, our supply of wine! 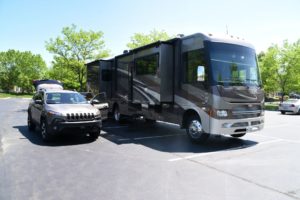 Without question, there is no better way to see and experience North America and "on the ground" and the best and most ecconnomical way to travel that way is by RV!  With this trip now history, our RV travels have covered more than 90,850 miles over the course of 1,368 days and taken us to 29 states (all at least twice), with a side trip to Hawaii, and ten of Canada's provinces and territories. Along the way we have met so many interesting and wonderful people, some who have become life long friends.

Yet, we have just scratched the surface of the literally thousands of places of interest to see and learn about.

Oh yes … when we left Florida we were dealing wiht 80o days.  The weather for the next few days here in Langhorne is for RAIN and temperatures in the 40os and 50os!