While feeling somewhat better, I was not up to the trip into Atlanta.  So we opted to stay at the campround, one of the most beautiful we stayed in during all of our travels.

For visitors,in addition to being able to bring one's RV, tents, 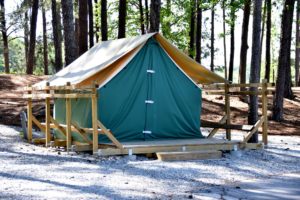 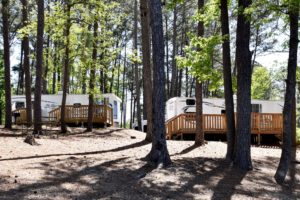 and even air conditioned yurts can be rented. 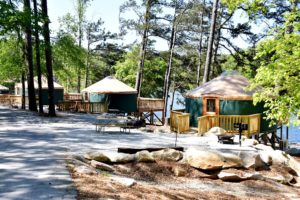 This afternoon, we did take a drive to see Stone Mountain's bas-relief. 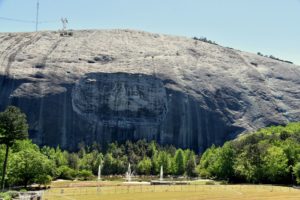 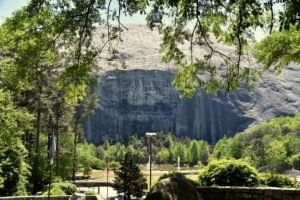 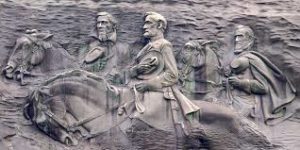 The largest high relief sculpture in the world, the Confederate Memorial Carving, depicts three Confederate figures of the Civil War, President Jefferson Davis and Generals Robert E. Lee and Thomas J. "Stonewall" Jackson. The entire carved surface measures three-acres, larger than a football field and Mount Rushmore. The carving of the three men towers 400 feet above the ground, measures 90 by 190 feet, and is recessed 42 feet into the mountain. The deepest point of the carving is at Lee's elbow, which is 12 feet to the mountain's surface.

In 1912 the carving existed only in the imagination of Mrs. C. Helen Plane, charter member of the United Daughters of the Confederacy (UDC). The Venable family, owners of the mountain, deeded the north face of the mountain to the UDC in 1916. The UDC was given 12 years to complete a sizable Civil War monument.

Three sculptors worked on the carving during its creation. Gutzon Borglum was hired in 1915 as the carving consultant, and in 1916 he was appointed carving sculptor by the Stone Mountain Monumental Association. Borglum envisioned a carving with seven central figures accompanied by "an army of thousands." He was not able to begin work on the carving until 1923 due to funding problems and World War I.

After blasting away large portions of the mountain with dynamite, Borglum was able to complete the head of Lee on January 19, 1924. In 1925 a dispute arose between Borglum and the managing association. As a result of the conflict, Borglum left, taking all of his sketches and models with him. Borglum went on to carve the famous Mount Rushmore sculpture in South Dakota.

Augustus Lukeman, the second sculptor, resumed work on the project in 1925. Lukeman's carving included the three central figures of the Confederacy on horseback. He removed Borglum's work from the mountain and diligently worked with pneumatic drills, but by 1928 (the original deadline) only Lee's head was complete and funds were depleted. The Venable family reclaimed their property, and the massive granite mountain remained untouched for 36 years.

In 1958 the state of Georgia purchased the mountain and the surrounding land. The Georgia General Assembly created the Stone Mountain Memorial Association. In 1960 the Stone Mountain Confederate Memorial Advisory Committee was comprised of six internationally known figures in the world of art. A competition was held, and nine world-renowned sculptors submitted designs for a new sculpture.

In 1963, based upon recommendations by the Advisory Committee, the Stone Mountain Memorial Association chose Walker Kirkland Hancock of Gloucester, Massachusetts to complete the carving. Work resumed in 1964, and a new technique utilizing thermo-jet torches was used to carve away the granite. Chief carver Roy Faulkner, a marine veteran with a talent for using the new thermo-jet torch, was able to remove tons of stone in one day. For over eight years Park guests could see and hear the workmen and their jet torches.

The figures were completed with the detail of a fine painting. Eyebrows, fingers, buckles and even strands of hair were fine-carved with a small thermo-jet torch.

The carving is actually much larger than it appears from Stone Mountain Park's attractions. Workers could easily stand on a horse's ear or inside a horse's mouth to escape a sudden rain shower. A dedication ceremony for the Confederate Memorial Carving was held on May 9, 1970. Finishing touches to the masterpiece were completed in 1972.

We debated taking the tram to the top of the moutain but decided against the trip as I was now feeling tired again. 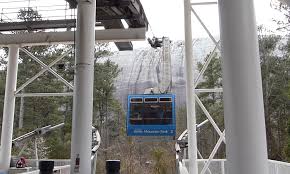 Frustrating, but this is the first time in the nine years we've been RVing that either of us has been sick.