This morning was an emotional one for Debbie as it was the funeral for her best friend from our years in Amherst, NH, Jackie Aumann, who had passed away earlier this week.

Our daughter, Nancy, did attend and was able to describe the services and extend our sympathies to Jackie’s husband (Fritz), daughter (Heidi) and sons (Derrick and Goeff).  Hers was the fourth close friend or relative who has passed away while we were traveling and unable to return for funerals.  Unfortunately, it is reflective or our ages and those of our contemporaries.

We took a self-guided walking tour around the historic commercial district today, really to look at the architecture of buildings constructed between the late 19th century and 1920s.   The first thing we noticed were the beautiful floral baskets having from every lamppost. 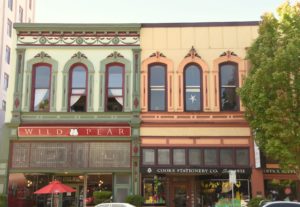 The Adolph Block originally housed the Sam Adolph Saloon, a butcher shop, and jewelers. After a fire in 1880, this brick building was constructed here to replace the wooden buildings that had been destroyed. 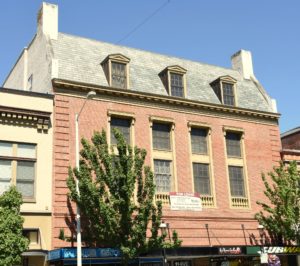 The Eckerlen Building was purchased by Eugene Eckerlen in 1909, a saloon operator, who rented the space to other merchants. From 1936 unto the 1960s, Bishop's clothing store occupied this building. In 1999, a fire destroyed one bay of windows, a third of the metal cornice and some of the interior; it has since been restored and now houses the Downtown Grocery & Deli and Alsham Mediterranean Restaurant.

The Elsinore Theatre was designed in a Tudor Gothic style meant to resemble the castle in the city of Elsinore from Shakespeare's play Hamlet.  It first opened on May 28, 1926.  Over the years it has hosted live theater and movies.  Both James Earl Jones and Gregory Peck appeared at the theater.

The Grand Theater was built as a lodge hall and opera house by the Oddfellows.  John Philip Sousa performed at the grand opening on November 29, 1900.  An annex containing a hotel and bus terminal was built in 1921. The buildings currently held retail businesses, offices, and a ballroom and other facilities that are rented for special events, while the theater serves as a film and music venue.

Salem’s first financial institution, the Ladd and Bush Bank, was founded in 1869. Ashael Bush II (1824-1913), the founder, was a prominent figure in Salem’s financial and political history. In 1967 the building was renovated and expanded on State Street. William Ladd and Asahel Bush II had this Italianate-style bank building constructed in 1868 to house the new Ladd & Bush Bank, the first bank in Salem, which opened on March 29, 1869. 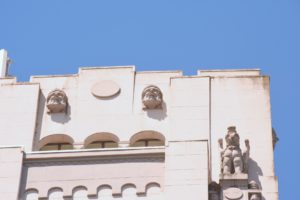 The old Capitol Tower/Livesley Building is Salem’s only skyscraper at 11 stories tall. It has elaborate ornamentation on the north and east elevations from the eleventh floor upward to the parapet. The outer bay (on the right in this photograph) has a standing human figure with stylized wings surrounding it. Bearded human faces in bas relief decorate the upper section of wall. Griffin statuary adorn both the northwest and northeast corners of the building. 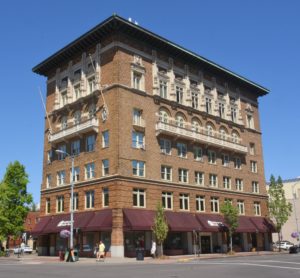 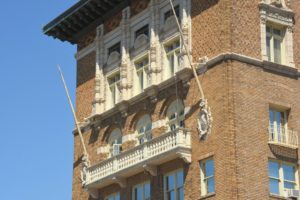 The Masonic Temple was built in 1912 in the Mediterranean/ Moorish style as designed by Ellis F. Lawrence, the designer of the Elsinore Theatre and the Hubbard Building. Terra cotta is liberally used for exterior decoration. This six-floor building on the northwest corner was vacant for a period of years but has recently been remodeled and contains offices. 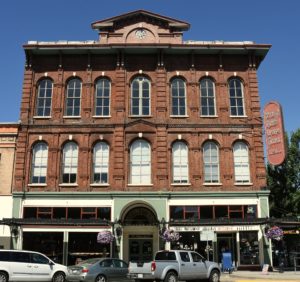 The 1869 Reed Opera House once housed the Oregon Supreme Court and State Library on the third floor, a 1,500-seat auditorium on the second floor, and seven stores at street level. Since its grand opening on September 27, 1870, the Reed Opera House has served as a performing arts center and shopping mall.  It closed in 1900 after the opening of the Grand Theater.

We also were amazed at the size of a Tulip Tree on the Marion County Court property; 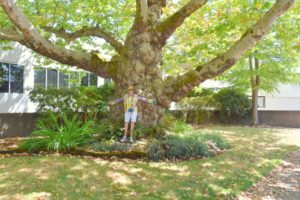 a relief on teh front of the courthouse; 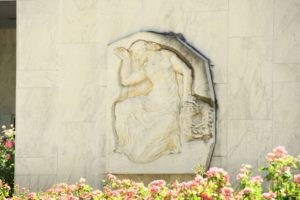 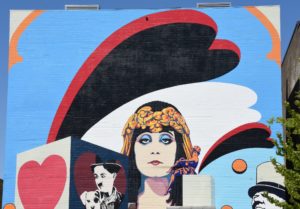 and the United Methodist Church 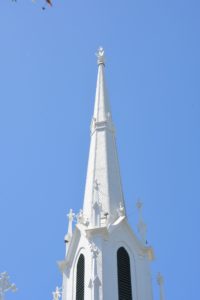 both of which could be  seen from the observation level of the State Capitol yesterday;  and two young girls sitting on the sidewalk while their father loaded chairs in the back of his pick-up truck. 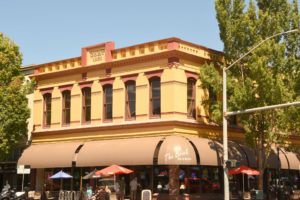 In 1891, the three Gray brothers constructed this two-story Gray Building. In early 1900, Charles Gray sold the building to Russell Catlin and James R. Lynn. The present owners are direct descendants of Russell Catlin.  On its street level, there is a great restaurant, “The Brick”. 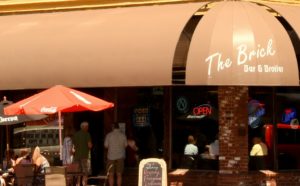 Returning to our car, we could see a “yellow” envelope on our windshield.  Apparently, we were partially parked in an improper space.  We thought about contesting it but the courthouse is not open until Monday and we’ll be a couple of hundred miles south of here by that time.  Oh, well …

We next found a “free” parking space at Riverside Park, along the Willamette River and walked the park. 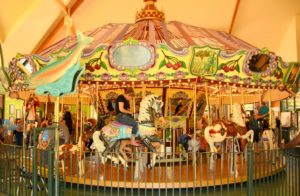 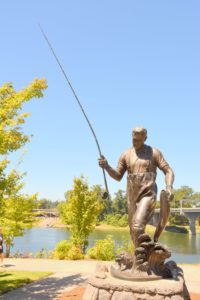 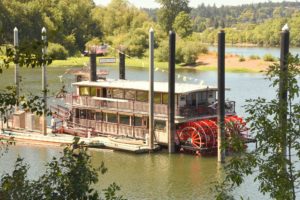 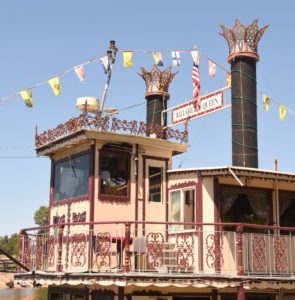 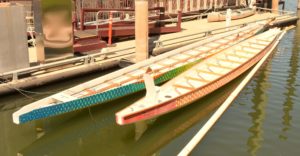 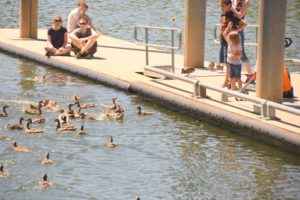 Kids feeding bread to the ducks

Amidst the excitement of families enjoying a day at the park, the reality of homelessness was present. 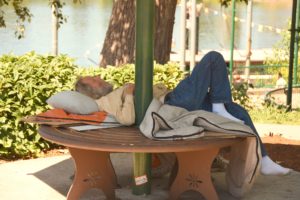 Stops at Super Cuts for Debbie, Safeway for groceries and a gas station when our warning light came on highlighted our short trip back to our campground.

Tonight, I discovered we had a leak in the fittings connecting our coach to the campground’s fresh water, which I’ve been thus far unable to completely resolve.  As tomorrow is Sunday and it is unlikely we can get it repaired until Monday, delaying our departure from Salem for another day.