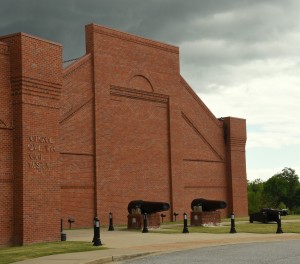 Although having studied Naval History while in college as part of my Navy ROTC curriculum, I was amazed at how much I’d either forgotten or was never exposed to.

The Museum tells the story of the Sailors, Soldiers, and Civilians, both Free and Enslaved as affected by the Navies of the American Civil War and provides a repository for relevant archives and artifacts on the subject, for all generations of the public. The Museum uses all available media systems/distribution platforms and live interpretation in furtherance of this mission. 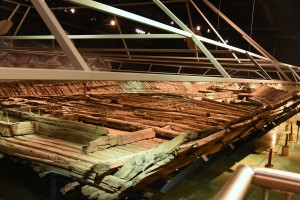 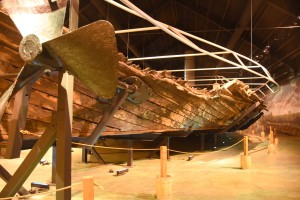 The CSS Jackson is the largest surviving Confederate Warship.  Situated just on the fall line at the furthest navigable point on the Chattahoochee, Columbus, Georgia was the site of a Confederate Naval Shipyard during the War. The largest product of this facility was the CSS Jackson, one of the largest of the ironclads built in the South. The Jackson was nearly 225 feet long, 54 feet wide and weighed 2000 tons.  Sitting dockside when Union Cavalry under Gen. James Harrison Wilson (known as Wilson’s Raiders) captured Columbus in 1865, it was set on fire to prevent any later use by the Confederates. After drifting ablaze downriver for two weeks, the Jackson finally sank nearly 30 miles south of Columbus.

After resting in the Chattahoochee River for 95 years, it was raised in 1961 by local citizens during the Civil War Centennial. Columbus businessman J.W. Woodruff, led local efforts to raise money and actually conduct the excavation and recovery of the wreck which became the centerpiece of the naval museum in Columbus. The gallery in which the ship is displayed is named in honor of Mr. Woodruff (The James W. Woodruff Gallery).  In its current home at Port Columbus, visitors may view the Jackson from above the main deck, at deck level and from well under the water line. The wreck, weighing more than 500,000 pounds, is complemented by a “ghost” structure to allow visitors to see the original size and construction of the ironclad.

as well as the wreckage of the CSS Chattahoochee. 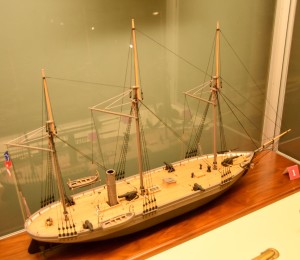 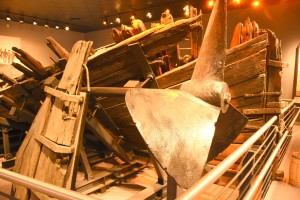 The CSS Chattahoochee was built to protect the growing manufacturing center of Columbus, Georgia. Its far inland location made it an ideal location for manufacturing uniforms, shoes, accoutrements, swords, firearms, and ships.  To protect this valuable base, the Confederate Navy contracted to have the gunboat CSS Chattahoochee built in Saffold, Georgia, just north of the Florida border.  In May of 1863, she suffered a terrible boiler explosion near Blountstown, Florida in the Apalachicola River killing 19 crewmen onboard the ship. The wreck was recovered and brought back to Columbus in January of 1864 and underwent repairs.  This steam powered sailing ship was stationed at the Navy Yard in Columbus and was sunk by her own Confederate Naval officers in April, 1865, to keep the ship from falling into Union hands. In the early 1960’s the ship was discovered and a part of the hull brought back to Columbus along with the original steam engines built at the Naval Ironworks.

Other exhibits include a full scale ship replica of the USS Water Witch, 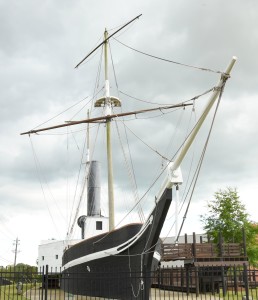 The USS Water Witch was a U.S. side-wheel steamship used in a variety of pre-war roles, including extensive surveying in South America. While in Paraguay, the ship was fired upon, killing one crew member and spurring an international incident. During the war, the Water Witch again served in a variety of roles, including supply ship, mail ship and eventually, as part of the U.S. blockading fleet off of Savannah, GA. While stationed at Savannah, the ship was captured by Confederate Naval forces in a daring nighttime raid. Among the first killed in the battle were the leader of the raiding party, Lt. Thomas Pelot and the slave pilot, Moses Dallas, who was supposed to guide the ship after the raid. Without the pilot, though the raid was successful, the Confederates were unable to utilize the ship as they had hoped, and kept the ship hidden for several months before sinking it to prevent recapture by Union forces. 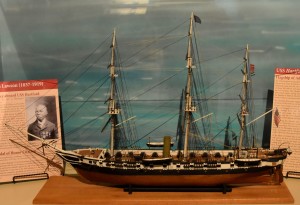 The USS Hartford, flagship of the US Navy’s first admiral, Admiral David Farragut, is replicated in part at Port Columbus to demonstrate daily navy life to museum visitors.  It was on board this ship that Admiral Farragut famously uttered, “Damned the torpedoes and full speed ahead” at the Battle of Mobile Bay. 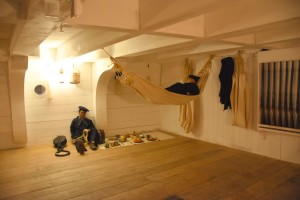 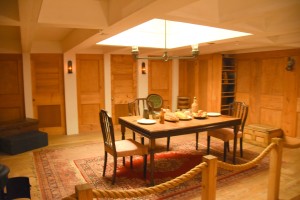 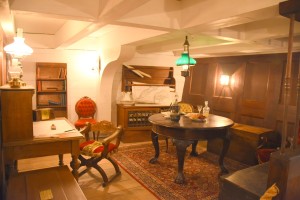 are displayed and are frequently used in living history at the museum.

a full scale replica of the USS Monitor’s famous turret, 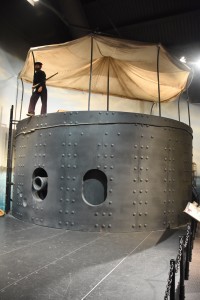 and an immersive panoramic dockside exhibit recreating Plymouth, North Carolina, complete with an exterior and interior view of the CSS Albemarle.

Among our many artifacts, they have the largest collection of Civil War Naval-related flags on display in the country. The collection includes various flags from ships and coastal forts, signal flags and Admirals’ pennants. 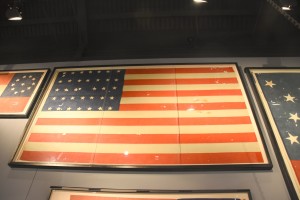 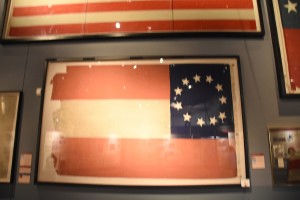 Our timeline exhibit takes you month by month through the war showing naval events and features many of the museum’s most rare artifacts, such as the uniform coat of Captain Catesby Jones and Admiral Farragut’s two-star hat insignia.

Exquisitely detailed Models of many famous Civil War ships are on the timeline including the CSS David, CSS Albemarle and the CSS Atlanta, which is located just opposite the huge 25-foot wide flag that was flying over the ship the day it was captured.

Of particular interest were the USS Fanny from which a manned balloon was launched on August 3, 1861 to observe Confederate troop movements near Hampton Rhodes, VA … thus becoming the world’s first aircraft carrier, having served on a modern day carrier; a history of the development of submarines and early submarine warfare 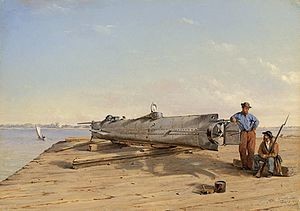 The H. L. Hunley was a submarine of the Confederate States of America that played a small part in the Civil War.  At nearly 40 feet in length, it was launched in July 1863 and then shipped by rail on August 12, 1863, to Charleston, SC.  The Hunley (then called Fish Boat) sank on August 29, 1863, during a test run, killing five members of her crew. She sank again on October 15, 1863, killing all eight of her second crew, including Horace Hunley himself, who was aboard at the time, even though he was not a member of the Confederate military. Both times the Hunley was raised and returned to service.

The Hunley demonstrated the advantages and the dangers of undersea warfare. She was the first combat submarine to sink a warship, although the Hunley was not completely submerged and, following her successful attack, was lost along with her crew before she could return to base. The Confederacy lost 21 crewmen in three sinkings of the Hunley during her short career. She was named for her inventor, Horace Lawson Hunley, shortly after she was taken into government service under the control of the Confederacy at Charleston.

On February 17, 1864, The Hunley attacked and sank the 1240-short ton USS Housatonic, which had been on Union blockade-duty in Charleston’s outer harbor. Soon afterwards, the Hunley sank, killing all eight of her third crew. This time, the ship was lost.

examples of how ironclads hulls were constructed, 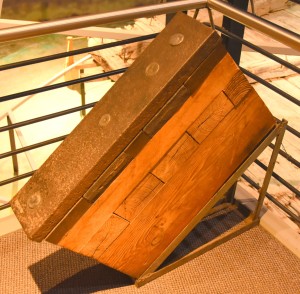 and the  photo and information of the USS Hunchback, 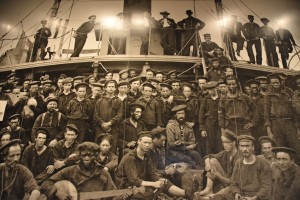 the USS Constitution, a wooden-hulled, three-masted heavy frigate launched in 1797, which was used as a training vessel for the US Naval Academy during the war … the same ship on which I received my naval commission in 1964. 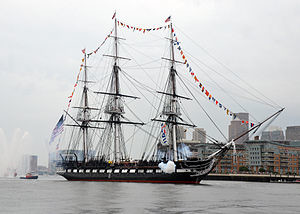 Three large murals grade one room and depict all of the major United States and Confederate ships in service during the Civil War.

We then went back to Lynn and Frank’s for a second straight night of incredible food!

This entry was posted in National Civil War Naval Museum. Bookmark the permalink.