Today we decided to join Dave and LaDonna on a drive through the Keweenaw Peninsula … approximately 150 miles long and 50 miles wide, it is the northernmost part of Michigan’s Upper Peninsula, projecting into Lake Superior and was the site of the first copper boom in the United States.

The Keweenaw Peninsula contains one of the largest and most unique copper deposits in the world. It is the only district where native copper was the primary mineral mined throughout the life spans of the mines. Native Americans may have mined between 100 and 500 million pounds of copper from deposits on the peninsula before being initially exploited the early prospectors in the 1840’s to 1880’s. More than 11 billion pounds of copper have been produced in the district over the 150 years of mining activity. 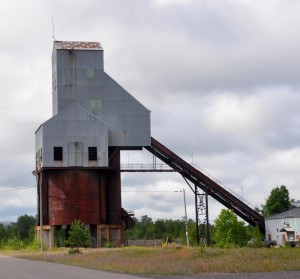 After a stop at an incredible bakery, we crossed the Portage Lake Lift Bridge 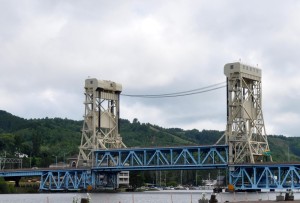 This lift bridge’s middle section is capable of being lifted from its low point of four feet clearance over the water to a clearance of 100 feet to allow boats to pass underneath. It is the world’s heaviest and widest double-decked vertical-lift bridge.

which separates the Keweenaw from Houghton and the rest of Michigan’s Upper Peninsula.

Driving north along the tree-lined western shore we caught glimpses of the blue waters of Lake Superior reaching to the horizon. Eagle River, once a boom town of the copper mining era in the Keweenaw, was our first stop … to view the Upper Eagle River Waterfall 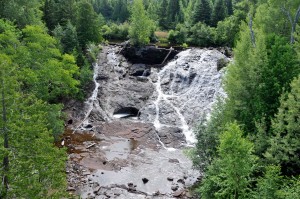 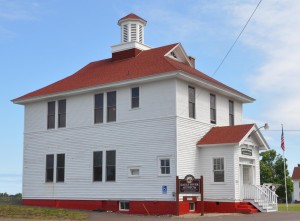 With its interesting exhibits and old photographs. 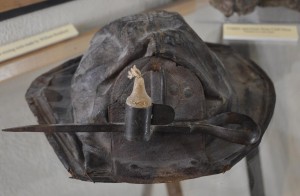 Opening on June 19, 1909, the Crestview Resort, built by the Keweenaw Central Railroad, opened in Eagle River and hosted 50,000 that year alone, However, after the railroad ceased operations in 1917, business slowed somewhat but it remained financially viable.. Unfortunately, the facility burned to the ground in 1925.

In 1846, after the discovery of large masses of high-quality copper, the Pittsburgh and Boston Company recruited miners, laborers and artisans to work the nearby Cliff Mine. Log and frame houses eventually replaced the tents and crude shelters first used by these men. Within a decade, more than 1,200 men, women and children lived in Clifton, which stood adjacent to the mine. The town flourished until 1870 when the mine closed and by the 1920s nearly everyone had abandoned the town. 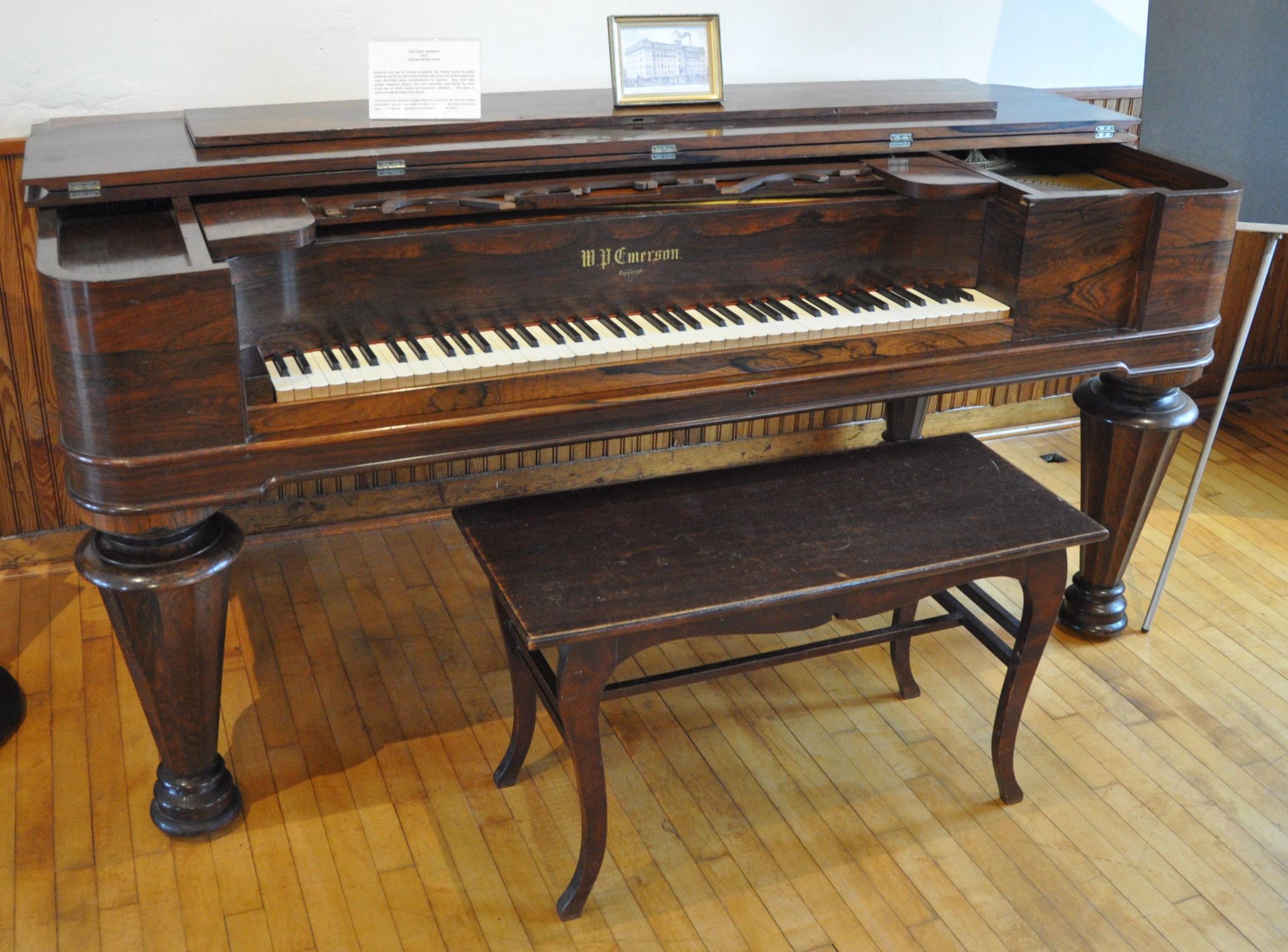 An Emerson Square Grand Piano (circa 1852). Emerson was one of several prominent Boston manufacturers and, by the turn of the 20th century were the largest and most successful in American. This piano is veneered with Brazilian Rose Wood. It was shipped to the Phoenix Hotel in 1853 and remained there until it was saved by the hotels’ staff from a fire which burned the hotel down in October 1912

From the now closed Lake Shore Bridge, now a pedestrian use only to view the falls, we were able to see the unique trusses and alternative to a keystone used on the Eagle River Timber Bridge which we just driven over. 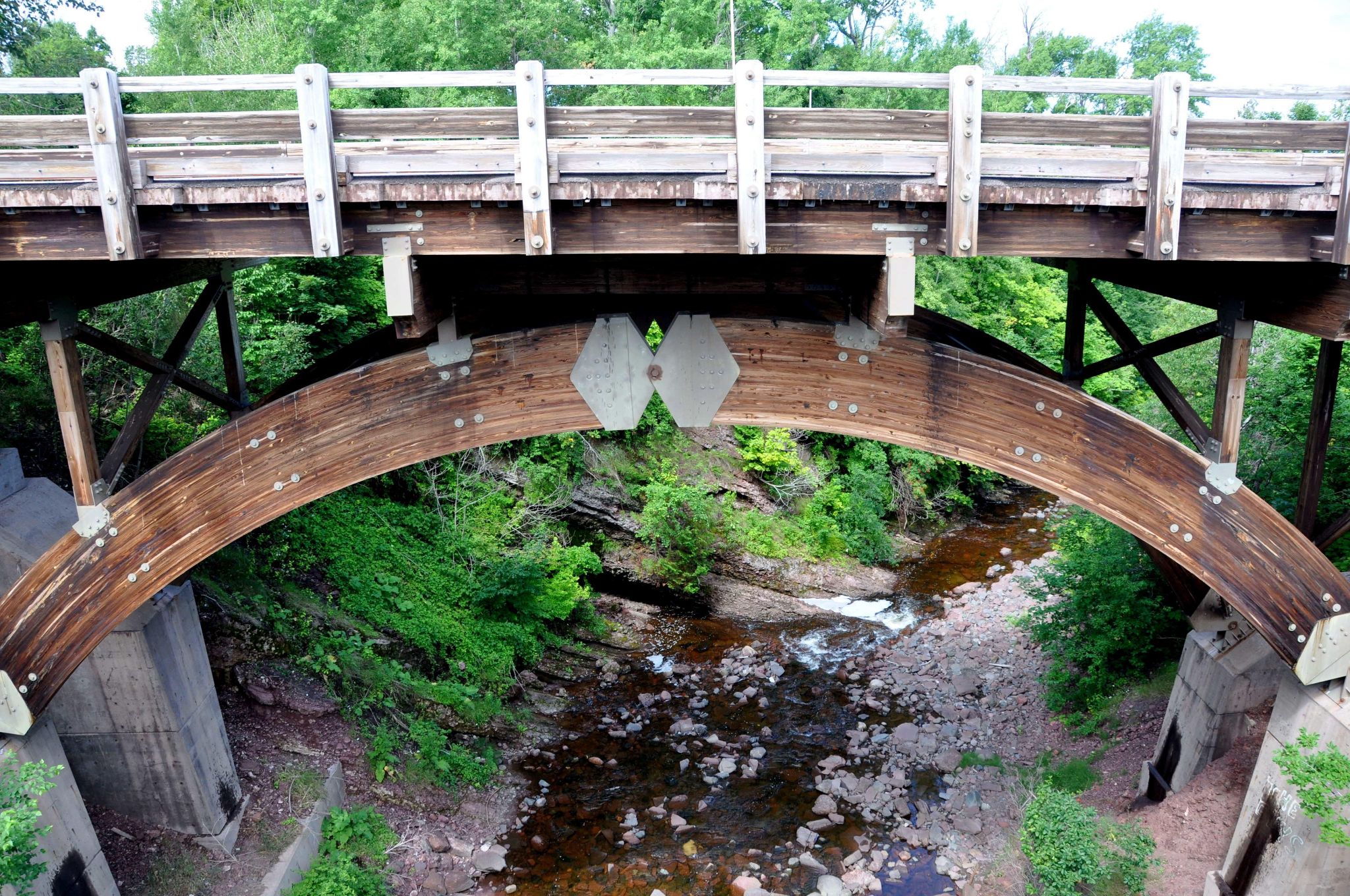 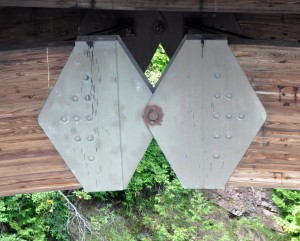 Continuing on, we reached Calumet, settled in 1864 under the name of “Red Jacket”, was once the center of the mining industry in the Upper Peninsula and earning it the nickname of “Copper Town USA”. Renamed Calumet in 1929, the downtown historic district, which is listed on the National Register of Historic Places, takes you pack to another era with the architecture along its main (actually 5th) street 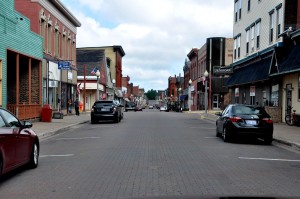 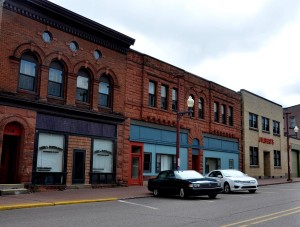 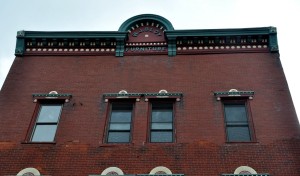 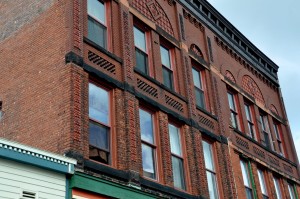 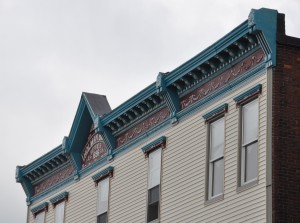 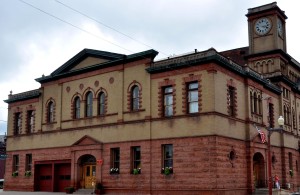 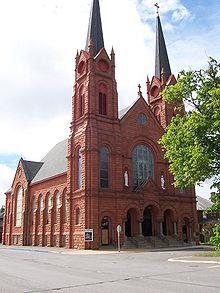 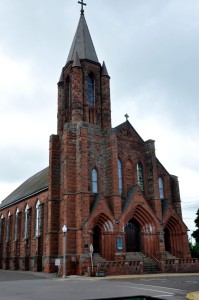 and, unfortunately a few other structures which are in sad states of disrepair. 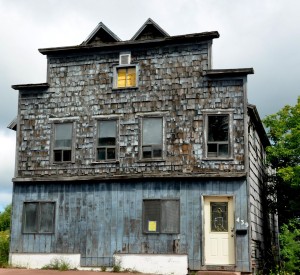 Curiously, all of the parking meters are set back from the street and next to the buildings. 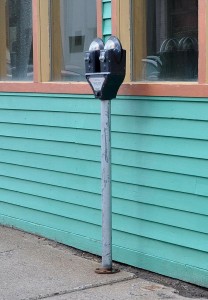 We’re presuming this is because of the (often deep) snow removal problems which would happen if they were on the curb as is the normal situation.

The area’s copper mines were particularly rich; the Boston-based Calumet and Hecla Mining Company produced more than half of the USA’s copper from 1871 through 1880. In addition to copper mining and smelting, the region also supported the dairy industry and truck farming.

Much of the road from Calumet to our Copper Harbor, at the northern end of the Peninsula, again ran along Lake Superior.

As we arrived in Copper Harbor … a typical tourist town populated with motels, restaurants and assorted arts and crafts shops … we spotted Russ and Georgina, whom we were meeting for lunch, just pulling into 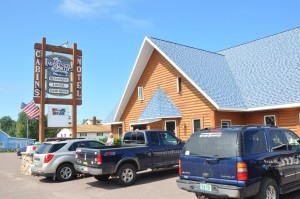 Copper Harbor boasts a summertime population of about 300 … which drops to 80 in the winter.  Perhaps that’s due, at least in part, to the temperature, which last year hit -35 degrees daily over one six week stretch!

After lunch, we decided to take the “gravel” 7.5 miles road to the outer tip of the Keweenaw Peninsula. The road proved a bit rougher than anticipated … with some sections more like the four-wheeling we did in Page, Arizona last summer. 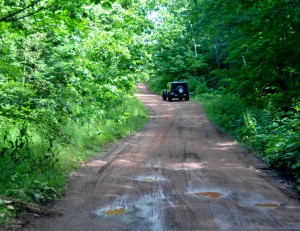 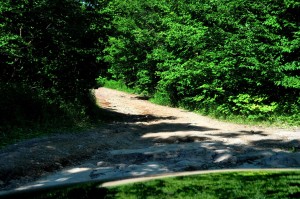 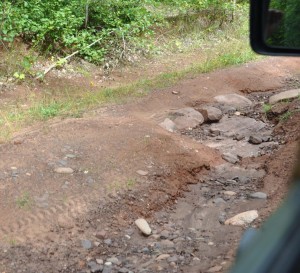 Following the intersection roads, many without any identification, made our trip even more challenging. The upshot was we apparently ended up just ½ mile from our destination before heading back to “civilization”.

As the gravel gave way to a paved road, we discovered we were at the northern terminus of U.S. Route 41 … which stretches 1,990 miles to Miami, Florida 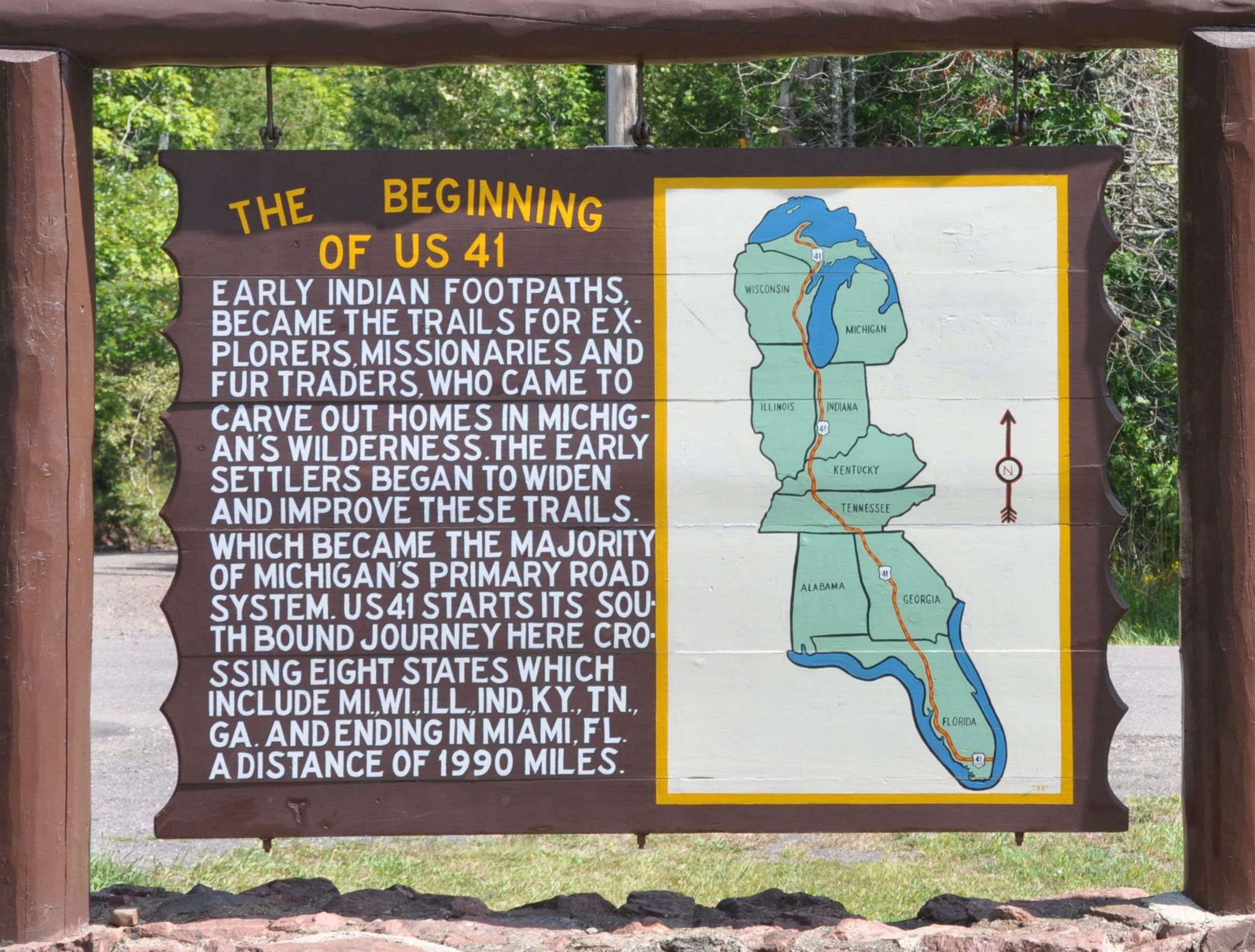 and actually runs right past the campground we stay at each winter in Naples.

Heading back, we drove through what seemed like a tunnel of trees 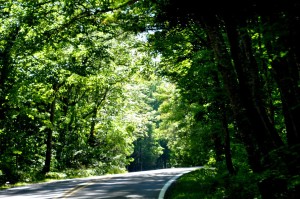 As my Jeep was pretty dirty after the trek into the wilderness, we decided to stop by a car wash near our campground. Unfortunately, I’d left my bike rack extended and … guess what … the car wash’s mechanism got caught on the rack and STOPPED!  We’d hoped that once we disengaged the sprayer from the bike rack it’d begin to work again … NO!  Hopefully, it’ll be fixed by tomorrow morning!