We took a bike ride and ended up at Lely’s Resort where we stopped by to visit with Debbie’s close friend, Wendy, and her “significant other”, Tom, for a nice visit.

After lunch we “vegged out”, relaxed in 80o+ temperatures, read, did some crossword puzzles, watched banks of cumulus clouds billowing up against a beautiful, blue eastern sky

and played some gin rummy.  At one point, our card game was interrupted by the sounds of bagpipes coming from in front of the coach parked directly across the street from us. … silhouetted against the lake’s fountain. 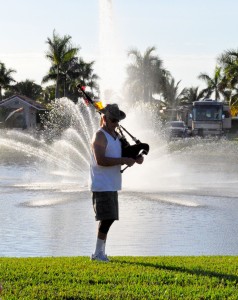 As Debbie loves the sound of bagpipes, we wasted no time in going over and introducing ourselves to Mike and Char (people are so friendly here).  They, in turn, introduced us to their friend, Bob Campbell, the bagpiper who liked to play near the lake every afternoon.  We also found out that he is also on YouTube (http://www.youtube.com/watch?v=AMGm5DM-LL4).