Like our grandchildren, we awoke early, possibly because our bodies have not adjusted to Pacific Standard Time.  However, it was immediately clear that Santa had, in fact, been watching us these past three weeks and that he had decided that we’d been “good” this past year since presents had appeared under our tree. 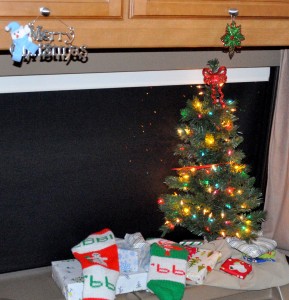 We had decided to take a drive and figured that the traffic in the greater LA area would be lighter on Christmas Day than later this week.

Although we will be in Pasadena with our RV Rally group beginning Saturday, the Rose Bowl is not on our agenda.  As Debbie had never been there (I’d been to a LA Galaxy pro-soccer game there many years ago while on one of many business trips to Pasadena) we drove by. 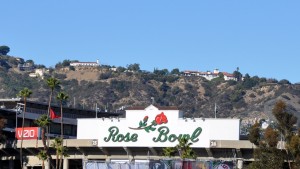 After grabbing lunch at a Subway (one of the few restaurants open on Christmas), we drove through Old Pasadena, stopping at the City Hall 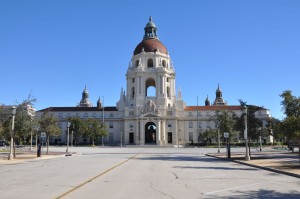 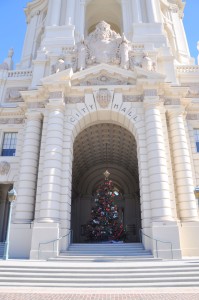 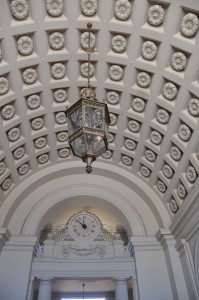 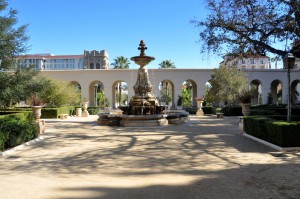 Two 7 foot bronze statues grace the south side of the City Hall Plaza. 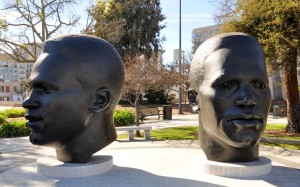 While Jackie Robinson history is well known … lettering in four sports at John Muir High School, Pasadena Junior College and UCLA before going on to break the color barrier in major league baseball in 1947 with the Brooklyn Dodgers … although we were unaware he was also among the founders of the first African-American owned bank in New York City.

However, we never knew anything about his brother, Mark, who won the Silver Medal in the 1936 Berlin Olympics 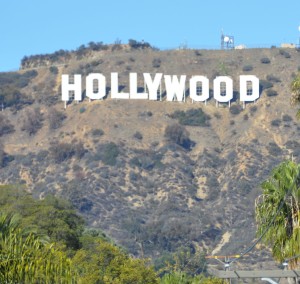 The Hollywood Sign (formerly known as the Hollywoodland Sign) is situated on Mont Lee in the Hollywood Hills area of the Santa Monica Mountains.  “HOLLYWOOD” is spelled out in 45-foot-tall white capital letters, and is 350 feet long.  It was originally created in 1923 as an advertisement for a local real estate development, but it garnered increasing recognition after the sign was left up.  From the ground, the contours of the hills give the sign its “wavy” appearance. 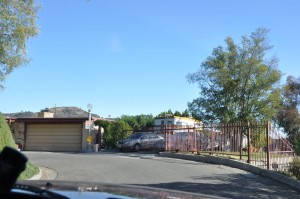 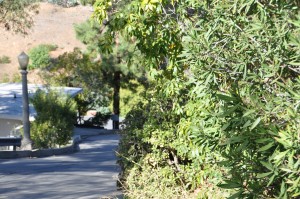 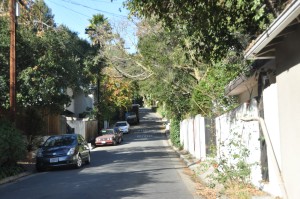 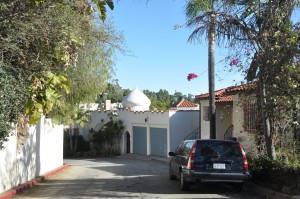 lined with homes and garages jammed together, most sitting on slopes seeming impossible to build on. 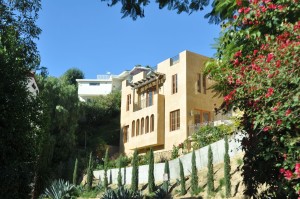 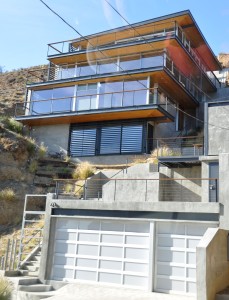 It’s a good thing we were in our Jeep as it would have been impossible to negotiate in an RV!

Unfortunately, the road was closed to non-resident traffic beyond a certain point, so we had to settle for some still distant views of the sign. 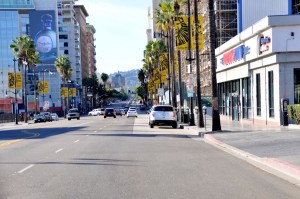 lined with tourists and a number of “uniquely” colorful bar exteriors 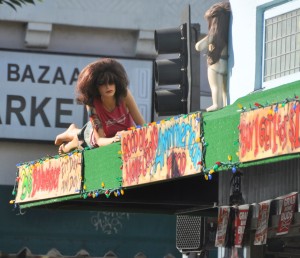 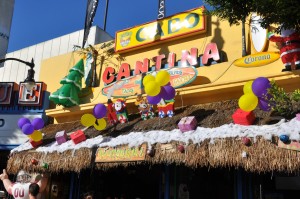 And the famous Hollywood Walk of Fame … which runs for blocks on the sidewalks on both sides of the Boulevard.  Seven types of stars can be found on the Walk of Fame.

In addition, about 500 stars on the walk are currently blank, essentially acting as placeholders for future honorees.

Nominees must have at least five years of history in their field before being considered, which means some of the hottest young stars may not yet be eligible.  Stars also may simply decline to participate.

That said, a number of the biggest names in Hollywood do not have stars on the Walk of Fame.  There are numerous reasons for this; a celebrity must be nominated, selected and agree to the ceremony in addition to having someone pick up the tab.

Gene Autry is the only person to be awarded stars in the five fields recognized on the Walk of Fame: film, TV, radio, live performance and music.  During his lifetime, Autry emerged as both a top money-making entertainer and a powerful businessman.  The late Bob Hope and the late romantic crooner Tony Martin are next with four stars each.  Thirty-three people, including Frank Sinatra, Danny Kaye and Jack Benny have been awarded stars in three fields.   Only two women have three stars, Dinah Shore and Gale Storm, a radio and television star best known for the program “My Little Margie.”

In addition, there are four special markers at the corner of Hollywood Boulevard and Vine Street to commemorate the Apollo Landing in 1969.

Randomly, we stopped to photograph just three of the some 2,700 start (as of June 2013, 500 were still blank, reserved for future nominees). 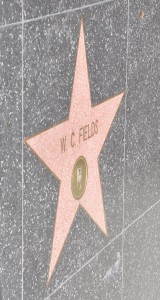 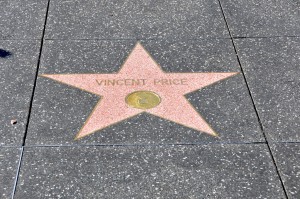 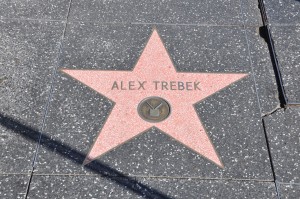 Enroute back to our campground, we passed a cell tower cleverly disguised as a palm tree. 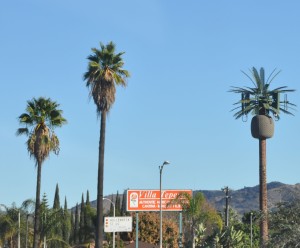 Back at our campground, I spent the rest of Christmas afternoon washing both our motorhome and Jeep.