With several options, we decided to return to Manitou Springs, once labeled the Sarasota Springs of the West with its clean air and numerous natural springs thought to be a source of healing waters which would cure many aliments and serious illnesses.  In its heyday, it boasted some 16 hotels, many catering to the rich and famous.  The 3 square mile community was and remains the gateway to both the Pike Peaks/Manitou Springs Cog Railway to the summit of Pikes Peak as well to the Barr Trail, the most popular hiking trail up the 14,115 foot mountain.

Our specific destination was Miramont Castle. 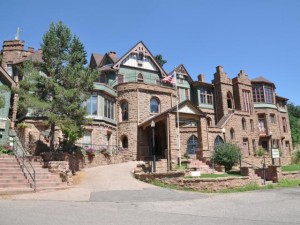 The property on which Miramont Castle is located is part of a parcel of land whose earliest deed dates back to 1862, and was once owned by one of Colorado’s most controversial citizens, Colonel John Chivington, who commanded the infamous Sand Creek Massacre of 1864.

Father Jean Baptiste Francolon had Miramont built, with construction beginning in 1895 and completion a year later.  The eastern (left side in the above photograph) was completed in 1897.  Incorporating all of the architectural ideals he fancied, this remarkable 14,000 square foot structure included nine separate styles of architecture and had both indoor plumbing and electricity at the time of its completion

From the medieval, crenellated battlements at each end of the Castle, to the beautiful Gothic front door, Miramont stands as a tribute to one man’s dream.  Shingle-style Queen Anne, Romanesque, English Tudor, Flemish stepped gables, domestic Elizabethan, Venetian Ogee, Byzantine, Moorish, and half-timber Chateau are used randomly throughout the four stories. For example, the Grand Staircase has two sets of windows, each in a different architectural style.

With the building stair-stepping up the mountain, the front door is on the first level and the back door is on the fourth. All of the floors had at least one exit to level ground. Miramont is over 14,000 square feet, has over 40 rooms, including eight-sided rooms, a sixteen sided room, a solarium which was once a conservatory greenhouse, arched doors and windows, with rarely a room with four square corners.  Further, all of the castles windows were on the south side of the structure as a solid rock cliff became part of its north walls.

After Father Francolon returned to his homeland of France in 1900, the castle remained vacant until 1904 when the Sisters of Mercy purchased it and used the building as a Sanitarium until 1927 when its continued use as a medical facility became uneconomical.  It then became a vacation home for the order until 1946 when it was sold to investors who divided it into nine apartments for retuning World War veterans.  The Manitou Historical Society purchased the building in 1976 and have rehabilitated and maintained the castle ever since. 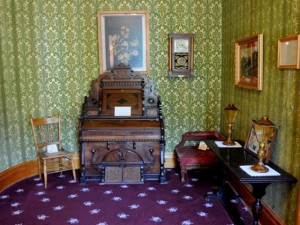 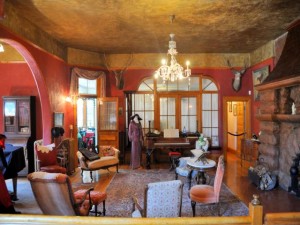 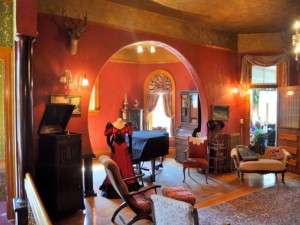 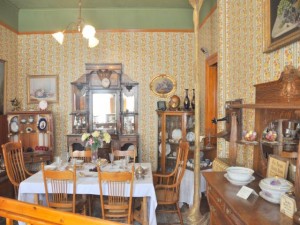 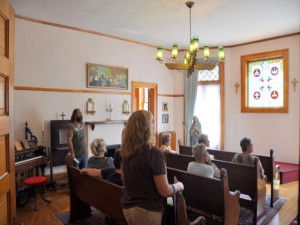 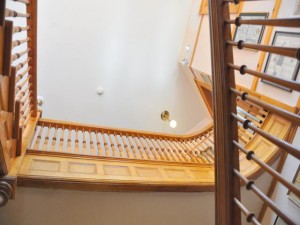 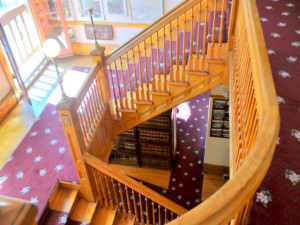 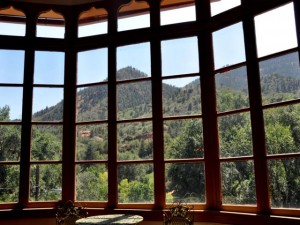 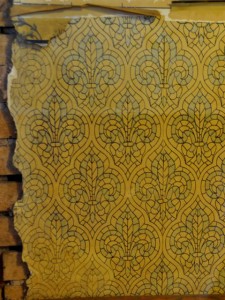 A small swatch of the original wall paper, now set behind plexiglass as it is poisonous; containing an arsenic compound called Paris Green which was used to prevent certain colors such as the blue in the fleur-de-lis from running and spoiling the design 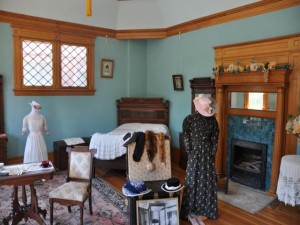 Mdme. Marie Francolon’s Bedroom – She was Father Francolon’s mother who also brought her own bed from France … 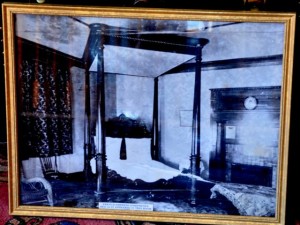 which, since returned to France, was at one time had been the bed used by Empress Josephine 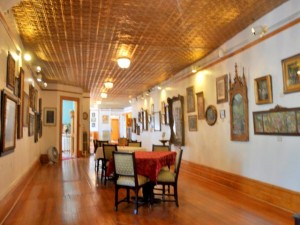 Among other fascinating artifacts housed in the castle was the library of law books of, John Carlton Young, one of the judges who oversaw the war crime trials at Nuremberg at the end of World War II. 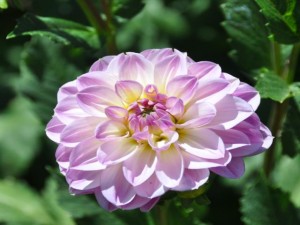 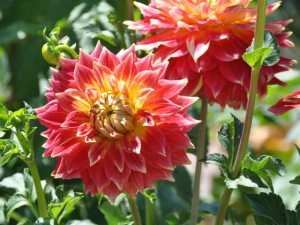 Enroute back to our campground, we passed by a building on which several chairs had been mounted, 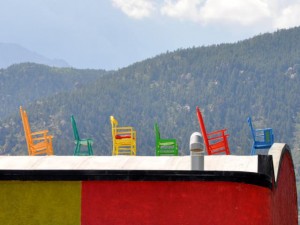 a one-man libertarian protest crusade … whom Debbie had seen a couple of days ago in Old Colorado City. 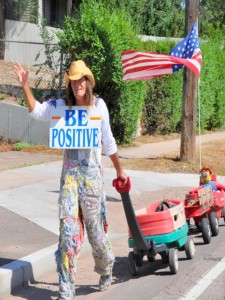 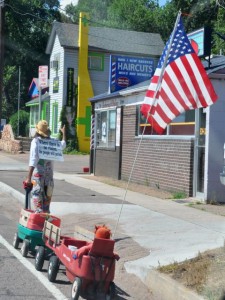 This entry was posted in Miramont Castle, Manitou Springs CO. Bookmark the permalink.