The Stanley Hotel is a 140-room neo-Georgian hotel located within sight of the highest peak in Rocky Mountain National Park. 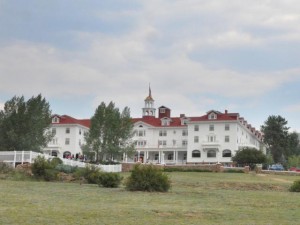 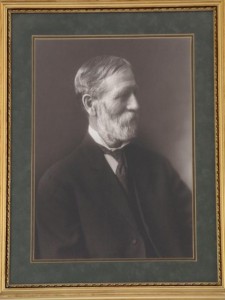 construction began in 1906 and the hotel opened on July 4, 1909 and catered to the rich and famous of the day … including such notables as Titanic survivor Margaret Brown, Theodore Roosevelt, John Philips Sousa, the Emperor and Empress of Japan and many Hollywood celebrities.

FO Stanley was an American entrepreneur and co-founder, along with this brother Francis Edgar (FE) Stanley of the Stanley Motor Carriage Company, which built the Stanley Steamer. 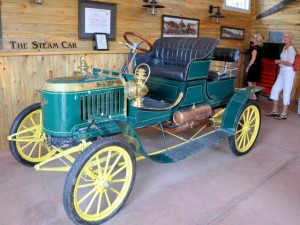 1906 Stanley Steamer (one of several on the property)

Earlier in their careers, they developed a dry method to replace wet-plate photography, a business they ultimately sold to George Eastman, the founder of Kodak.

Suffering from tuberculosis, FO Stanley traveled west in 1903 at his doctor’s suggestions, arranging for he and his beloved wife, Flora, 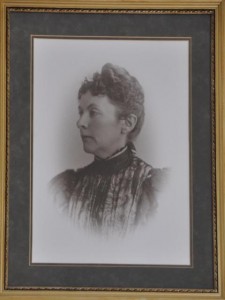 to stay in a dirt-floor cabin in Estes Park for the summer,  They immediately fell in love with the area and Stanley’s health miraculously began to improve.  Impressed by the beauty of the valley and grateful for the environment’s positive impact on his health he decided to invest his money in the area.  And, at the urging of Flora, who wanted a home like the one they’d left back in Maine, he built the Stanley Hotel and adjacent buildings. 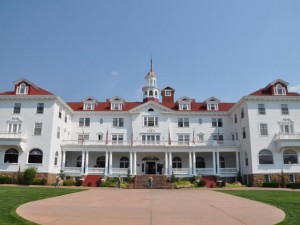 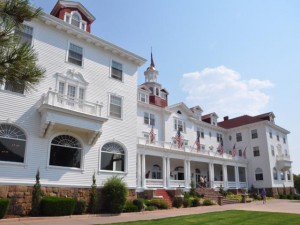 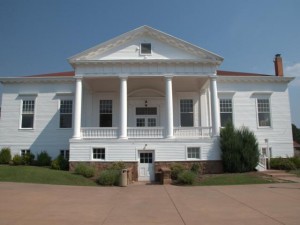 Wood and rock were obtained from the nearby mountains and the hotel was built in the Georgian architectural style which was experiencing a revival in the early 20th Century.  The exception to the construction materials were the internal columns and ceiling beams which, as FO and Flora were sensitive to the environment and especially the local forests, were fabricated from Plaster of Paris and then painted. 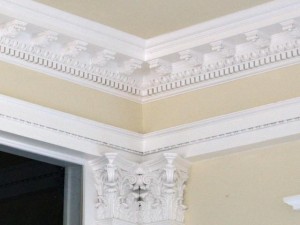 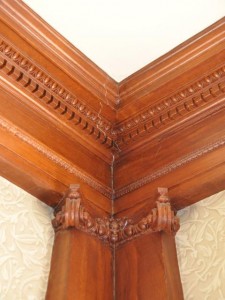 The hotel was equipped with running water, electricity and telephones.  The only amenity initially omitted was heat as, at the time, the hotel was designed as a summer-only resort.

Although we’d been to the Stanley last fall while visiting with friends from the Denver area, on this occasions we’d arranged for a tour, taking us into places not open to those just wandering through limited section of the main and lower level floors. 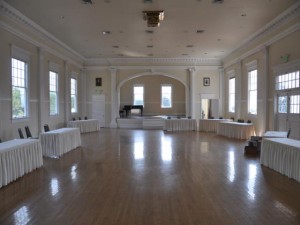 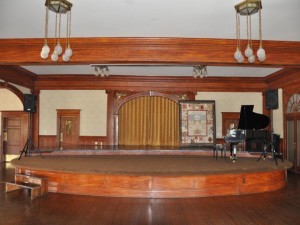 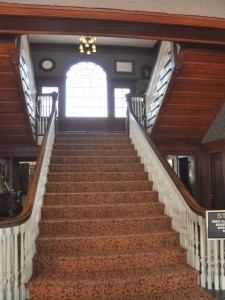 Main Stairway Leading from the Lobby 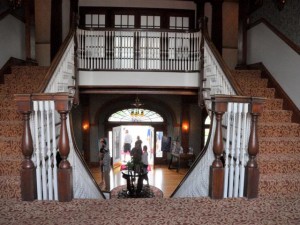 to the Second Floor 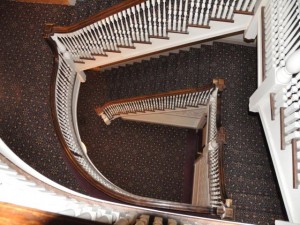 Staircase looking down from the fourth to the second floor 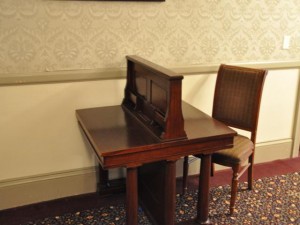 An original writing desk from the hotel’s opening (circa 1906) 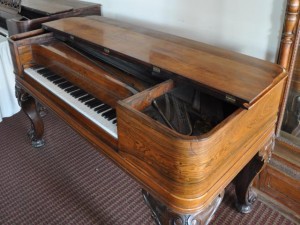 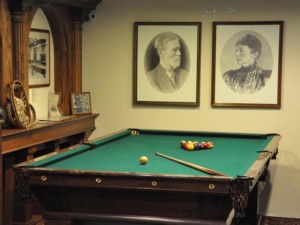 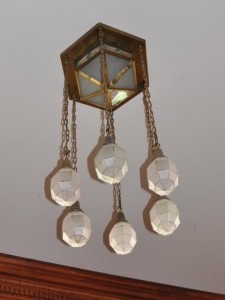 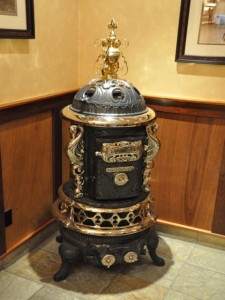 While I have absolutely no interest nor belief in ghosts, haunting, aliens visiting earth and/or the paranormal, many believe the Stanley hotel is haunted and guests and have reported a number of ghostly activities, primarily in the ballroom and suites 217 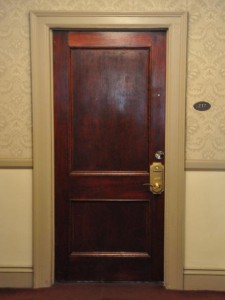 and 401 … reports of parties going on in the ballroom only to find it empty … hearing the piano I the music room when no one was there … a cowboy standing in a guest room … candies left out for guests disappearing, purportedly by the children from earlier times who still reside in the hotel … missing jewelry … luggage opened and clothes neatly hung and put in drawers before the guests arrive at their rooms … photos taken of laundry in the hallway on the fourth floor which turn out to be absent when the photos are later viewed. 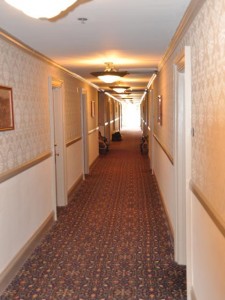 The SiFi television Ghost Hunters” was invited to investigate the hotel.  While the discovered rational explanations for many “hauntings”, there were others they could not decipher.

Most notably, Stephen King got the idea for his best-seller, “The Shining” after staying in room 217 in the almost empty hotel before it closed for an extended period.  While the original movie based on the book was shot elsewhere, the scenes for the 1996 made-for-TV version were filmed at the Stanley.  The Jim Carey movie, “Dum and Dumber” was also filmed at the Hotel … although Carey got so frightened after just two hours in room 217 he would not stay at or enter the hotel except for time when actually shooting for the movie.

After our tour, we enjoyed lunch at the Hotel. 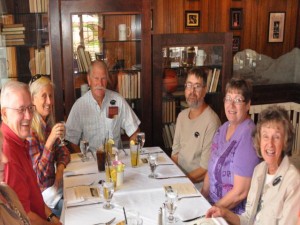 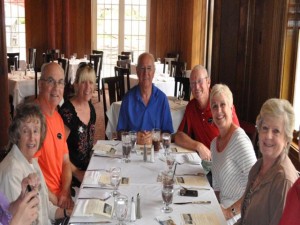 Back at our campground we walked through a small, local antique auto show. 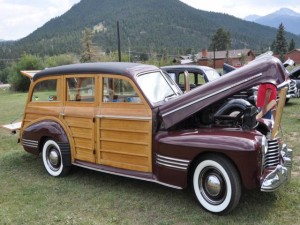 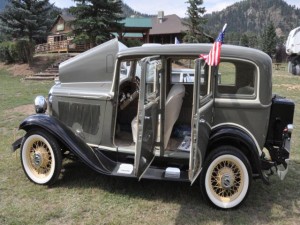 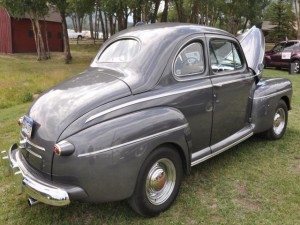 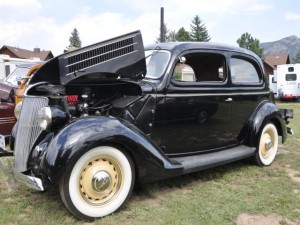 This evening we went to the Barleens Rocky Mountain Opry Country Jubilee. 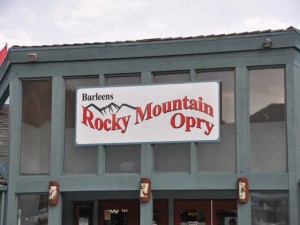 While not country music fans, the music was great, the performers were extremely talented. 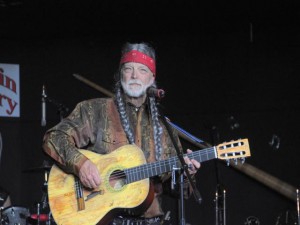 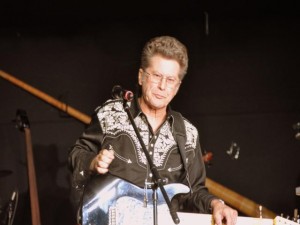 This entry was posted in Stanley Hotel, Estes Park, CO. Bookmark the permalink.