Another chilly morning as we headed north for Canada.  The drive was uneventful along US Routes 2 and 59 … with virtually no traffic … other than a single, one-lane detour. 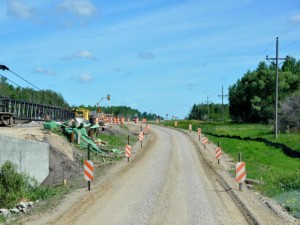 The further north and west we drove in Minnesota, the Flatter the landscape.  And, the fields of corn, wheat and canola were larger than we’d seen traveling across the central part of the state. 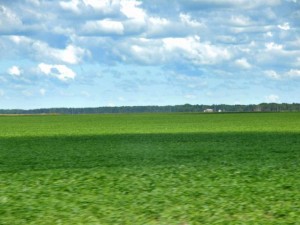 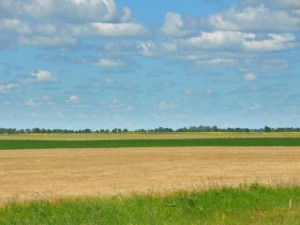 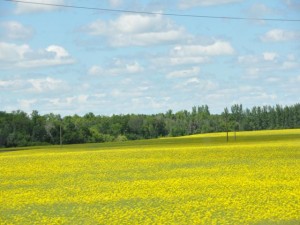 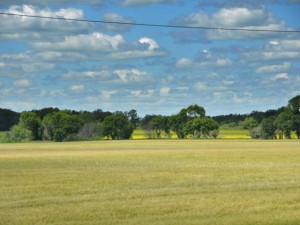 With her practiced eye, Debbie was able to spot the surprisingly few decaying barns and homesteads visible from the highway. 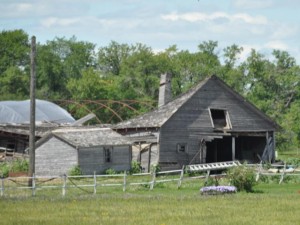 Of the numerous towns we passed through … requiring us to drop our speed to 30 MPH … we were struck by the populations which ranged from a high of just under 1,800 to just 69 people.  In fact, in one community, someone who’d apparently give birth to a new baby girl had taped the last digit of the 168 population figure over to now read 169.

While many of these communities were little more than a few seemingly empty diners and general stores, others seemed like boom towns with one or more gas stations, a school, medical clinic, small grocery store, an occasional building mural 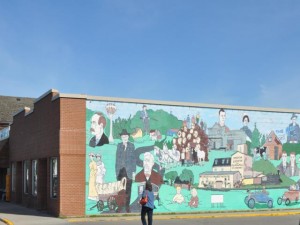 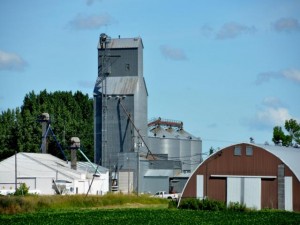 With gas far more expensive in Canada, we topped off our motor home (to the tune of 22 gallons and $80.00) before 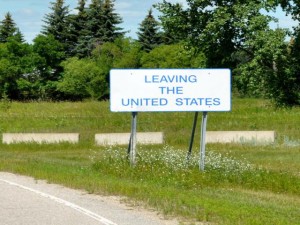 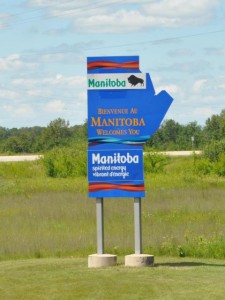 Approaching Canadian customs, we were focused on the height of the overhang and completely missed the STOP (ARETE) sign.  However, after setting off a series of alarms and greeting two initially less-than-friendly Canadian custom’s officials, we were screened and asked more questions that we’ve typically experienced at the border.

In retrospect, it was amusing that when asked if we had any firearms, Mace or similar items and answered, “No”, and then, while showing them a list of the quantities of beer and wine aboard (which was slightly over the authorized limit where not levies would be due) and asked about “spirits” also answered, “No” … the official seemed a bit surprised.  Then the Saki box in the back our Jeep tow vehicle aroused their suspicion until we convinced them it contained only a tool box, bungee cords, a neck pillow and some reusable shopping bags.

At this point, I guess we were deemed a harmless pair of American seniors and waived through with the first smile we’d received during the ordeal.

Once on the road again, we were not surprised that the landscape looked remarkably the same as it had just a few miles south in the US.

This evening, we’re in Ile de Chênes, a suburb of Winnipeg, Manitoba.