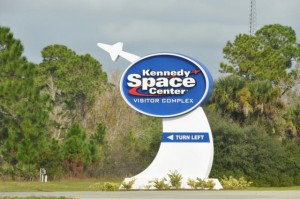 It’s been 32 years since our last trip to the Kennedy Space Center and it has obviously changed significantly, particularly considering that visit predated the shuttle program.  After navigating the ticket lines NASA’s iconic globe logo and tribute to JFK 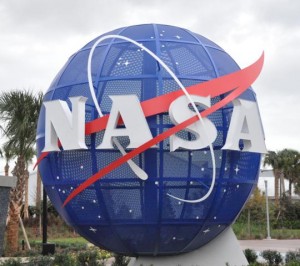 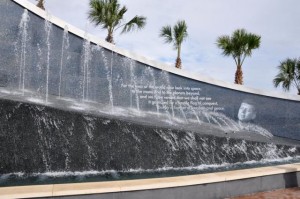 are magnets for people to use a backdrops for photos.  Then a dramatic display of the launch vehicles used to boost the United States’ early satellites as well as its Mercury (Redstone), Gemini (Titan II) and Apollo (Saturn) astronauts into orbit. 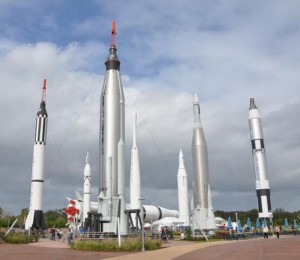 It is amazing that the Gemini astronauts were able to spend up to two weeks in a space so cramped they had to be, in the words of Tom Stafford, be “shoveled in” and had no way to stretch out their legs during the mission. 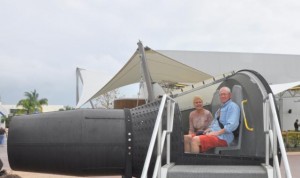 While still minimal space, there was a bit more room in the Apollo crew modules. 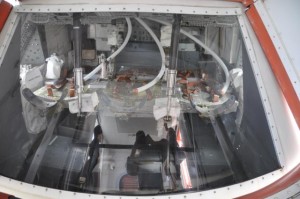 Even the pay phones have been designed to carry KSC’s space theme. 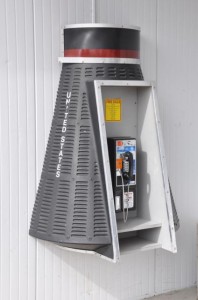 A large wall mural depicted the International Space Station and displayed the flags of all the nations which have provided tenants. 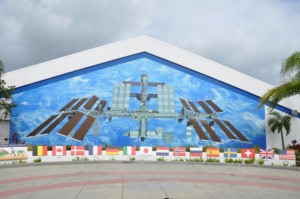 We had a poignant moment at the memorial to those who lost their lives in the space program, which included not only the three astronauts lost in the Apollo 1 fire and the Challenger and Columbia accidents but also others killed while training in less spectacular and under-reported incidents. 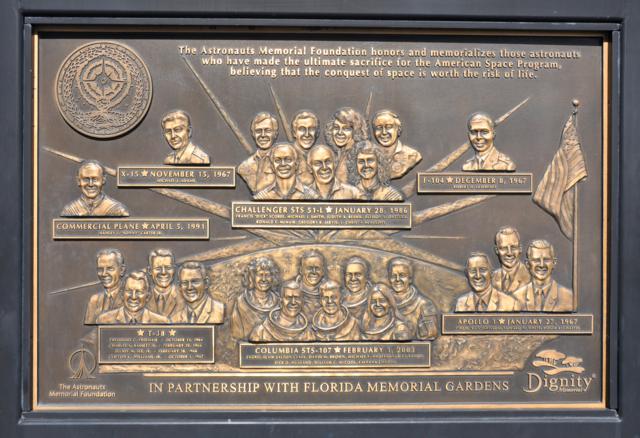 Also on display were a USFA T-38 trainer, 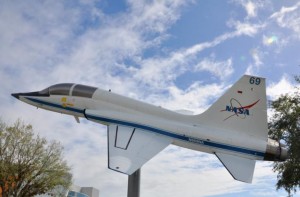 used to keep help maintain the flying proficient of its astronauts;  and prototypes of the suborbital XCOR Lynx 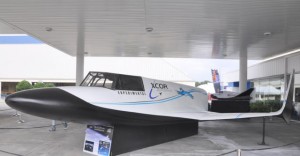 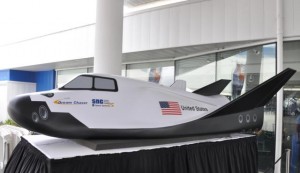 We also went through the 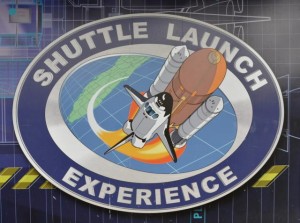 simulator of a launch in the Space Shuttle.

We decided to take one of the three newly-offered tours, ours to Launch Pad 39-A, from which all of the Apollo moon shots and a majority of the Space Shuttle launches took place; although, tragically its first Shuttle launch was the ill-fated Challenger in 1986.  Enroute, we got a great view of the 52-story VAB (Vehicle Assembly Building). 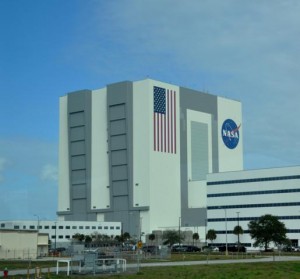 While most people have seen pictures, few probably realize the round NASA log is larger than a basketball court and American flag is “larger than life” (209’ long by 110’ wide with each star more than six’ in diameter and each stripe 9’ wide).

We also passed by one of the Mobile Launch Pads 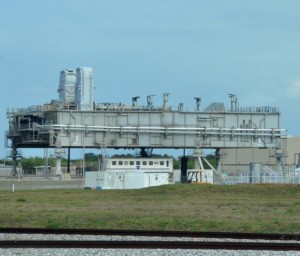 on which launch vehicles are assembled and then hauled by the “Crawler“ at a brisk one mile per hour to launch pad 39-A (a six hour trip) or 39-B (an eight hour trip) and getting 40 feet per gallon (making our motor home seem like an fuel-saving eco-vehicle). 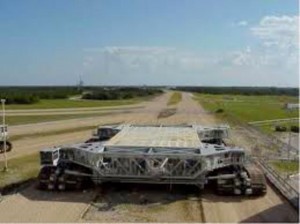 The 131’ by 114’ Crawler weighs in at 6 million pounds and have a carrying capacity of 18 million pounds.  The width of the road bed to accommodate its eight tracks is equivalent to an eight lane highway.

Arriving at Pad 39-A we exited the bus and stared up at the enormous structure, so large that it is hard to comprehend its true size 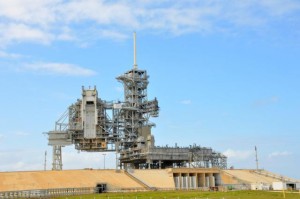 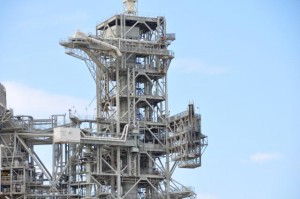 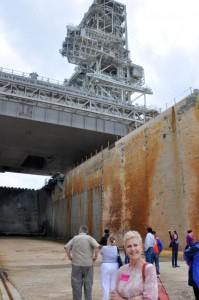 Launch Pad 39-B, by contrast, is in the process of being completely rebuilt as a “clean pad” which will make it available to multiple types of vehicles which arrive at the pad with service structures on the mobile launcher platform as opposed to custom structures on the pad.  As of February 2011, NASA was offering the pad and facilities to private companies to fly missions for the commercial space market. 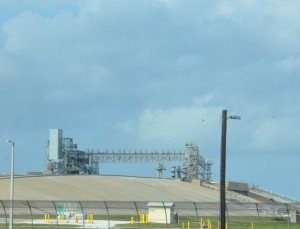 We toured a museum dedicated to man’s first trip to and around the moon flown by Frank Borman, James Lovell and William Anders; including their actual Command Module. 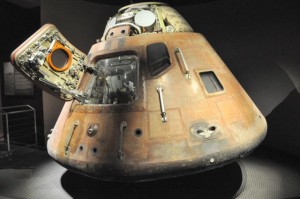 In an adjacent building we had the opportunity to get up-close-and-personal with the Apollo 18 vehicles … and Congress cut-off NASA’s funding for moon missions after the safe return of Apollo 17 in 1972.

Standing underneath the Saturn boosters is breath-taking and pictures fail to accurately reflect its enormity. 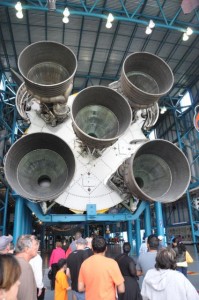 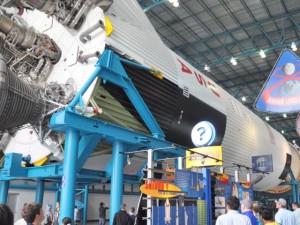 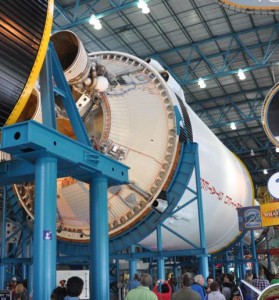 Stage 2 (propelling the vehicle through the upper atmosphere – 81.6’ long by 33’ in diameter and weighing 1.06 million pounds) 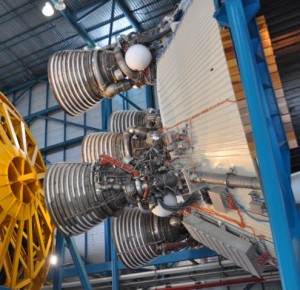 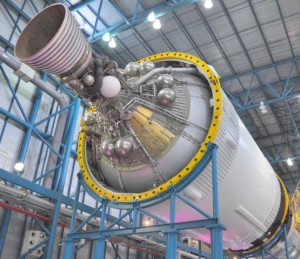 Stage 3 (Service Module – 58.5’ long by 12.6’ in diameter and weighing 262,000 pounds – used twice during a lunar mission: first in a 2.5 min burn for the orbit insertion after second stage cutoff, and later for the trans-lunar burn, lasting about 6 min.) 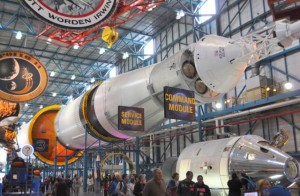 Suspended from the ceiling was the Lunar Module which was to have carried two of the Apollo 18 astronauts to the surface of the moon. 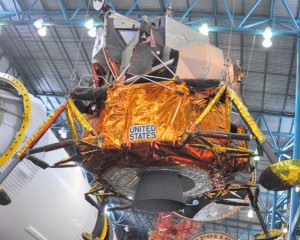 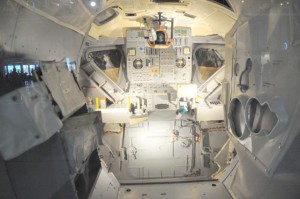 Unfortunately, there were parts of the Space Center complex we were unable to visit before closing, possibly luring us back for a second day on Sunday.