We opted to take a tour, a wise decision as we had an incredibly knowledgeable tour guide who shared a tremendous amount of detailed information about the battles which took place there and many of the combatants.  It gave both Debbie and I a far deeper understanding of what occurred and an appreciation of the people who “met on a great battle-field of that war”.

We also learned that to qualify as a licensed tour guide at Gettysburg, hundreds of books must be devoured and a vigorous test passed!

So interesting was the day, we changed our plans for the following few days in order to return for another day at Gettysburg, this time touring on our own.

It is difficult to depict what we saw and learned at 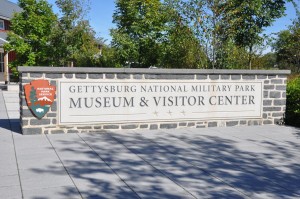 without putting it in some historical perspective.  Otherwise, it becomes a series of pictures of monuments and fields.  At the same time, without actually visiting the site it’s still difficult to comprehend the way the battle unfolded and why so many lives were lost

First, why Gettysburg?  Gettysburg, a small community of 2,400 inhabitants, was an unlikely place for such an engagement, and not the location at which the Union had hoped to fight the Confederate army.  Rather, it was determined by General Robert E. Lee who hoped to strike a fatal blow to the Grand Army of the Potomac (Union Army).   He chose Gettysburg as it was the crossroads of eleven roads, facilitating military logistics, it was in the North and it was close to Washington, DC.

Leading his Army of Northern Virginia north through the Shenandoah and Cumberland Valleys, he arrived to the west and north of Gettysburg in late June 1863.

On July 1st, elements of the two armies collided west of Gettysburg during the early morning hours.  The fighting escalated throughout the day as more Union and Confederate troops reach the battlefield.  By 4:00 PM the defending Federal troops are defeated and retreat through Gettysburg, where many are captured.  The remnants of the Union force rallied upon Cemetery and Culp’s Hills. 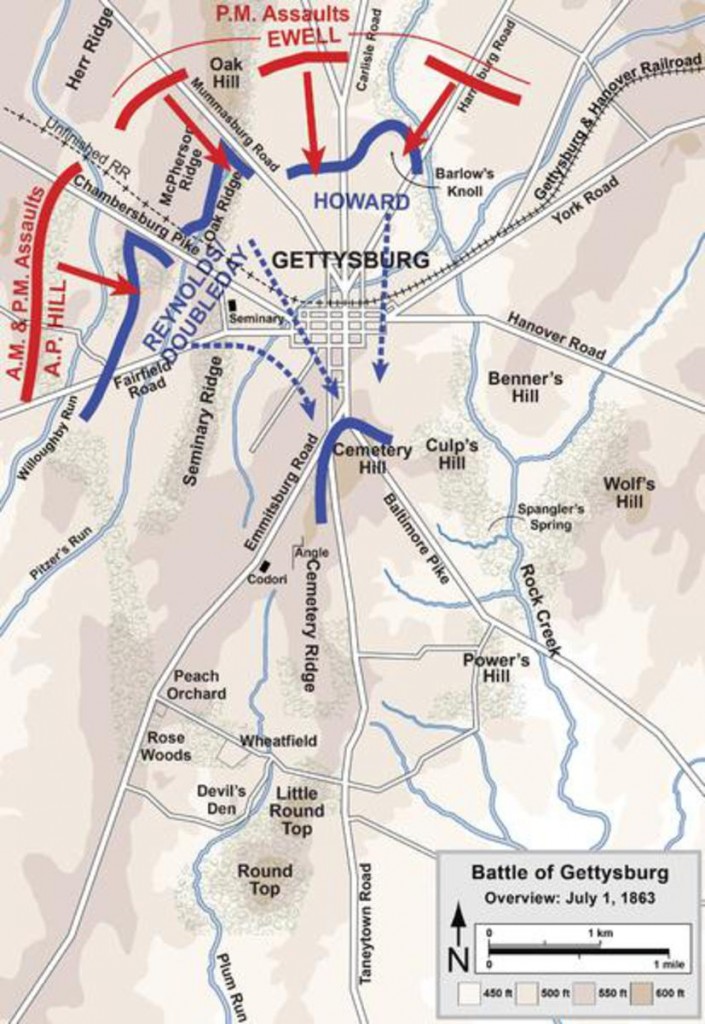 By July 2nd, the main strength of both armies had arrived by the morning.  General Lee launched attacks against the Union’s left and right flanks in an attempt to dislodge Meade’s army from its strong position.  Confederate General Longstreet’s assault upon the Union left made good progress but is eventually checked by Federal reinforcements from the center and right flank.  On the Union’s right, General Ewell’s Confederate troops are able to seize part of Culp’s Hill but, elsewhere, are repulsed. 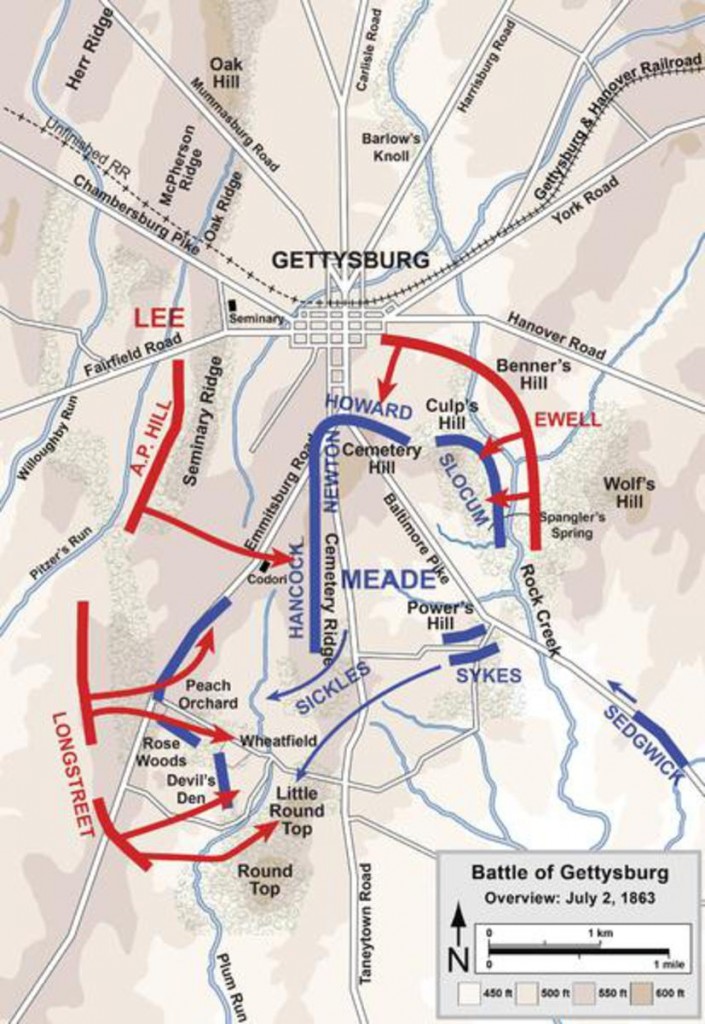 On the final day of the battle, July 3rd, while Ewell renews his efforts to seize Culp’s Hill, Lee turned his main attention to the less well-defended Union center.  After a two-hour artillery bombardment, he sent 12,000 Confederate infantry to try to break the Federal lines on Cemetery Ridge.  Despite a courageous, but ultimately futile, effort, the attack (subsequently dubbed “Pickett’s Charge”) is repulsed with heavy losses.  East of Gettysburg, Lee’s cavalry is also checked in a large cavalry battle.  Crippled by the loss of over 40% of his force, Lee can no longer continue the battle. 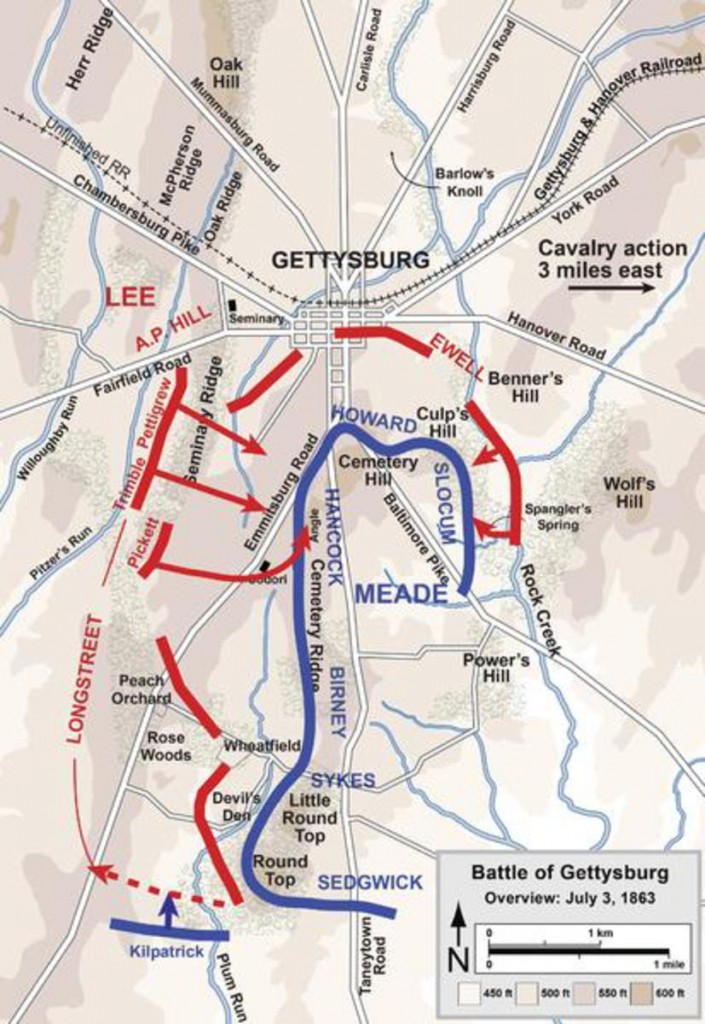 July 4th saw little action other than some spasmodic sniping by the opposing sides.  The following day, under the cover of a rainstorm, General Lee’s armies moved south in a strategic retreat.  While the Union won the Battle of Gettysburg, the war would grind on for another year and one-half before the slaughter of Americans by Americans finally came to an end.

For years I have wondered, given the history of the successes of the tactics of the Americans during the Revolutionary War, why during the Civil War the Union and Confederate forces lined up shoulder-to-shoulder and marched across open territory into the killing and maiming artillery and rifle firepower of their enemy.

It seems that both nearly all Union and Confederate generals were initially trained at West Point, where Napoleonic battle tactics were gospel.  However, since the Napoleonic wars, armies stopped using muskets with a maximum effective range of perhaps 100 yards and began using early rifles with which a soldier could hit his target at up to 500 yards.  And, while shoulder-to-shoulder formations made for easy communication during battles before the days of radio communications, such formations made such armies easy targets for rifle-equipped armies … not to mention putting them within range of canons with 1-2 mile ranges.

Strategically, the Civil War was a sad example of young men fighting and becoming canon-fodder for old mens’ wars and outdated tactics!

After watching the movie and visiting the museum at the Visitor’s Center and touring the battlefields of Gettysburg, the lasting memories are of the some 1,328 monuments, most dedicated to the various state and local militias, participants in the various battles and plaques describing the horror of those three days in July 149 years ago and canons lining the redoubts and ridge lines where they were positioned during the battle; 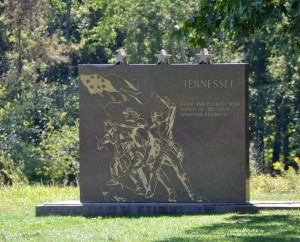 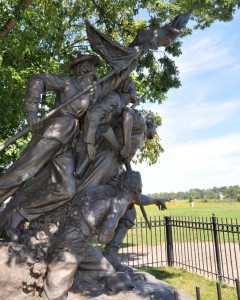 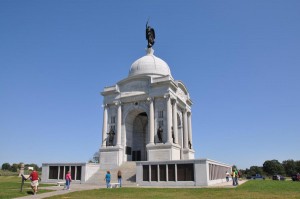 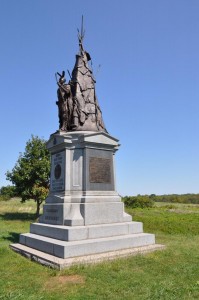 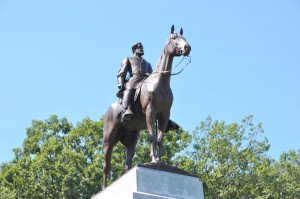 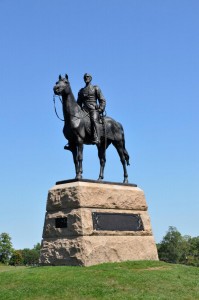 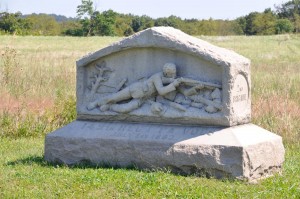 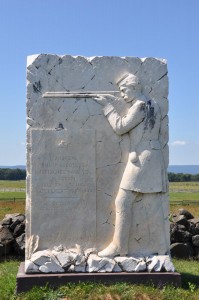 Eternal Flame at the Top of the Light Peace Memorial 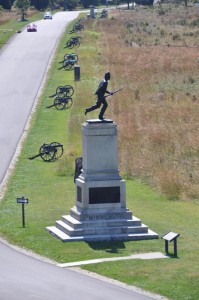 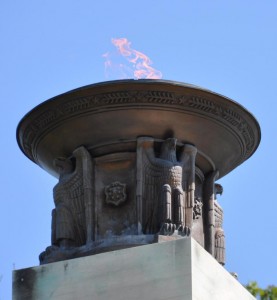 several hundred canon, although only 1 cannon can be officially documented as having actually seen action at Gettysburg, and that is “Cannon Number 233” of Lieutenant John Calef’s Battery A, 2nd U.S. Artillery, which fired the first Union artillery shot of the battle while under the command of General John Buford’s Cavalry Division on McPherson’s Ridge on July 1st; 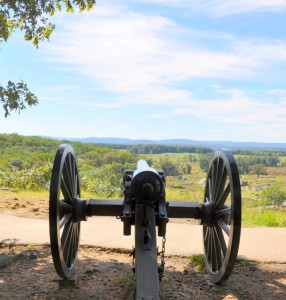 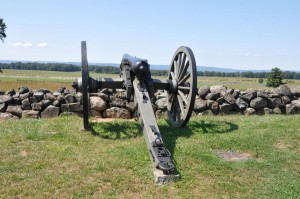 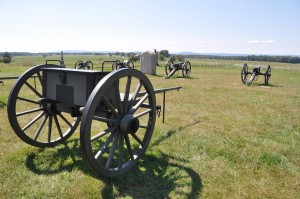 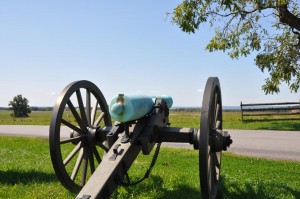 Bronze Canon Pointed Across the Field Stormed by Pickett’s Charge 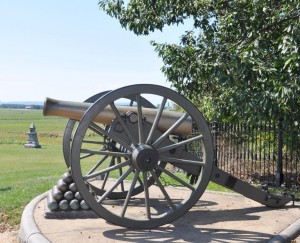 scattered homes and barns (only one barn from 1863 remains); 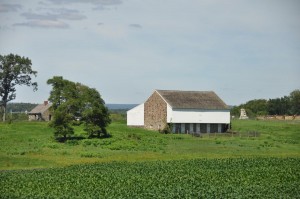 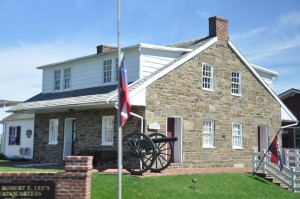 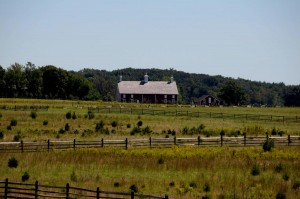 and visions of the horror which took place on the now tranquil fields and hills. 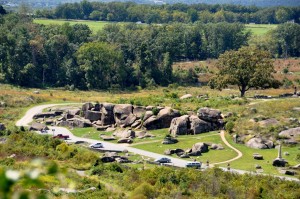 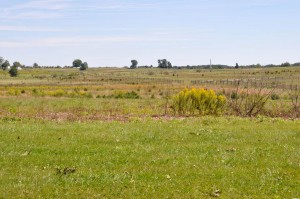 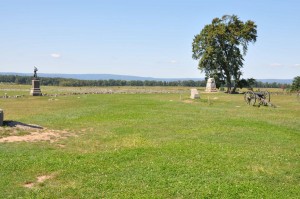 Among the other anecdotes we learned was the during World War I, a young Captain Eisenhower used the fields over which General Picket’s troops charged as a tank training area and during World War II, the area became a Prisoner of War facility for captured German military personnel.

It is also interesting to note that it was Robert E. Lee who captured John Brown at Harper’s Ferry after his takeover of the armory.  Further, prior to the war, Lee was the Superintendent of the U.S. Military Academy at West Point and he was married Mary Anna Randolph Custis, the great-granddaughter of Martha Washington by her first husband Daniel Parker Custis, and the step-great-granddaughter of George Washington.

While on Cemetery Ridge on our second day at Gettysburg, we were joined by Jim Lovell, 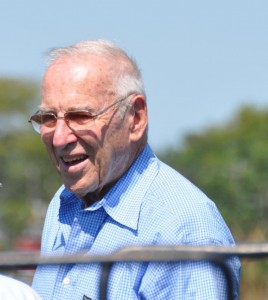 who flew on Gemini 8 and 12, Apollo 8 (the first manned craft to fly around the moon and return to earth) and was the commander of Apollo 13 (of “Houston, we have a problem” fame), who was being given a private tour (we listened in on) prior, we suspect, to attending the memorial service for Neil Armstrong in Washington the following day.

On November 19th of that year, 4½ months after the Union and Confederate forces have slaughtered each other, an ailing President Lincoln traveled to Gettysburg at the invitation of David Wills, the man charged with “cleaning up the Gettysburg battlefield”, to help dedicate a Cemetery to the Union dead (at that time, the Confederate dead were often buried close to where they fell … although later reburied in cemeteries across the South); 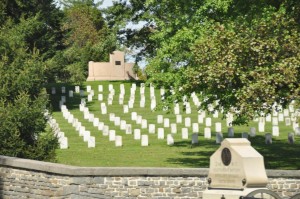 After a lengthy speech by Edward Everett, Lincoln spoke briefly, after which he returned to Washington where he was diagnosed with a mild case of smallpox.

When he spoke the following words, the crowd fell silent.

“Four score and seven years ago our fathers brought forth on this continent a new nation, conceived in liberty, and dedicated to the proposition that all men are created equal.

Now we are engaged in a great civil war, testing whether that nation, or any nation, so conceived and so dedicated, can long endure. We are met on a great battle-field of that war. We have come to dedicate a portion of that field, as a final resting place for those who here gave their lives that that nation might live. It is altogether fitting and proper that we should do this.

But, in a larger sense, we can not dedicate, we can not consecrate, we can not hallow this ground. The brave men, living and dead, who struggled here, have consecrated it, far above our poor power to add or detract. The world will little note, nor long remember what we say here, but it can never forget what they did here. It is for us the living, rather, to be dedicated here to the unfinished work which they who fought here have thus far so nobly advanced. It is rather for us to be here dedicated to the great task remaining before us—that from these honored dead we take increased devotion to that cause for which they gave the last full measure of devotion—that we here highly resolve that these dead shall not have died in vain—that this nation, under God, shall have a new birth of freedom—and that government of the people, by the people, for the people, shall not perish from the earth.”

Despite the historical significance of Lincoln’s speech, modern scholars disagree as to its exact wording, and contemporary transcriptions published in newspaper accounts of the event and even handwritten copies by Lincoln himself differ in their wording, punctuation, and structure.

The five known manuscript copies of the Gettysburg Address are each named for the associated person who received it from Lincoln. Lincoln gave a copy to each of his private secretaries, John Nicolay and John Hay.  Both of these drafts were written around the time of his November 19 address, while the other three copies of the address, the Everett, Bancroft, and Bliss copies, were written by Lincoln for charitable purposes well after November 19. In part because Lincoln provided a title and signed and dated the Bliss copy, it has become the standard text of Lincoln’s Gettysburg Address.

The two earliest drafts of the Address are associated with some confusion and controversy regarding their existence and provenance. The Hay draft differed from the version of the Gettysburg Address published by John Nicolay in 1894 in a number of significant ways: it was written on a different type of paper, had a different number of words per line and number of lines, and contained editorial revisions in Lincoln’s hand.

Today, both the Hay and Nicolay copies of the Address are within the Library of Congress, encased in specially designed, temperature-controlled, sealed containers with argon gas in order to protect the documents from oxidation and continued deterioration.