With the battery, orange light and one other towing problem … combined with a rather cool and overcast day, we decided to head straight for the Cape and reschedule our tour of the Newport mansions until the end of our trip.  However, yet another problem cropped up when getting our tow vehicle set for “free wheeling”.

As a result, I drove the motor home while Debbie followed in the Jeep.

Enroute, Nancy called and told us that Taylor’s doctor wanted her to have an initial IVIG treatment next week and could we come to NH to watch Jake.  That was a no-brainer!  So, our plans changed once again and we simple slide our trip to Maine and the Maritimes another five days!  Oh, the freedom of retirement!

Arriving at Peters Pond RV Campground in Sandwich, we pulled in and while hoking up, had a slight mishap and dented one of our exterior side panels.

I tracked down a local Jeep dealer in Falmouth and took a run over only to discover that two of the three problems we were still having were easily solvable.

Friday night’s cocktail party and dinner at the Sea Crest in Falmouth was fantastic.  Some of the people attending I had not seen in 50 years.

The following day, we took a trip to our cottage in Brewster to drop off some things.

Deb’s brother Dave was there and after a trip to Orleans to pick up two bikes we’d bought while on the Cape we’d purchased in August, we had lunch with Dave and then returned to our RV in Sandwich.

We spent Sunday morning at Gail’s house for a farewell brunch … which no one really wanted to leave.

After returning to Sandwich, we hooked up and had a shorter-than-anticipated trip to New Hampshire. 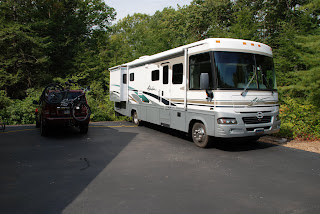 Nancy and Jason will be leaving on Tuesday for Darien so we settled in for four to five day stay with them, Taylor and Jake.  Pretty tough challenge!