Today we are celebrating our 45th Wedding Anniversary!

Our destination was Havre, the economic and cultural center of the “Hi-Line” (the Route 2 corridor between North Dakota and the Rocky Mountains). Its economy is still centered the Burlington Northern Santa Fe Railroad hub 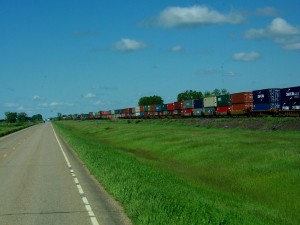 and grains and livestock 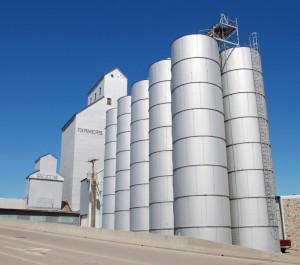 In 1891, Bullhook Siding was chosen as the Great Northern Railroad’s division headquarters.  However, James Hill, the railroad’s owner, and others didn’t think that was a dignified enough name for their new rail hub.

To come up with a new name, a town meeting was called. Any, in good old pre-turn-of-the-century western fashion the meeting ended in an all-out brawl.  A successive meeting, however, was more productive.  The first decision was that only the five original homesteaders would be allowed to vote.

Once “France” was rejected, it was suggested that “Le Havre” after the French hometown of one of the original homesteader’s parents.  The ultimate agreement shortened it to “Havre”, meaning “the haven or harbor.”

After checking in to our campground and grabbing a bite of lunch, we walked through Havre, first stopping at the Underground Museum.  It is a treasure trove of antiques and businesses from a bygone era.

In James Hill’s attempt to make the newly named Havre in to a more respectable community, a literally underground mall, connected by tunnels, was built.  Among other establishments which found a home in this subterranean commercial district were a saloon 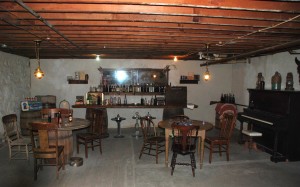 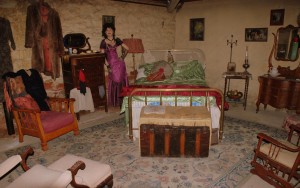 where each “employee” has her own, numbered “office”. 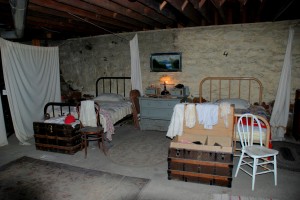 These establishments were, in turn, connected to the local hotel by yet another “secret” tunnel system.

In 1904, a fire totally destroyed the center of Havre.  However, the underground commercial district was unscathed and many of the business (including a post office, barber, dentist, printer, pharmacy, lawyer, baker, blacksmith, Chinese laundry, opium den, and many others) simply opened up shop below ground. 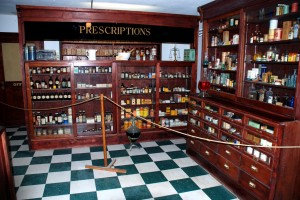 There were also scores of other artifacts of interest: 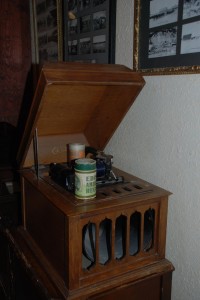 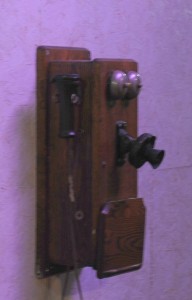 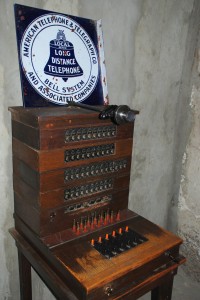 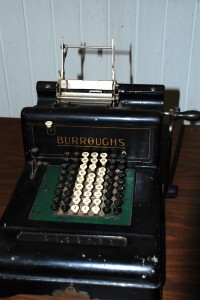 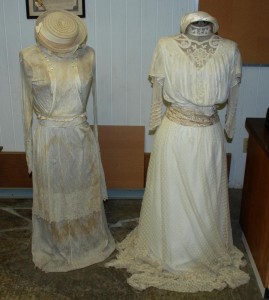 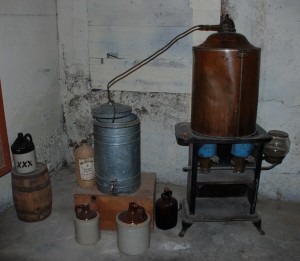 From there, we more or less followed a self-guided walking tour of the historic district, mainly homes from an earlier era when the town was evolving.  We’ve enjoyed other such tours in cities we visited in the past. 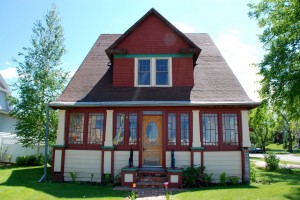 Late one-story Victorian-styled home. Multi light windows and a steeply pitched roof with rolled edges are reminiscent of an English cottage (circa 1902) 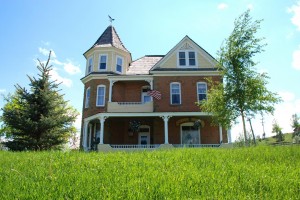 The “Castle” is a stately Queen Ann house, built of brick (circa 1903) 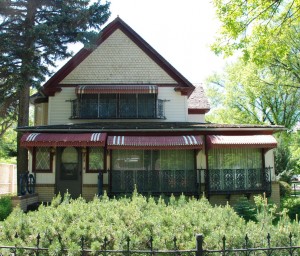 Another Queen Ann influenced house with Victorian roots (circa 1906)

There was also an interesting and very fitting sculpture of a farmer, rail man and cowboy. 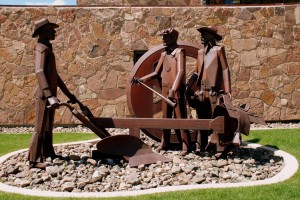 We also stopped in at the Carnegie Library, now used as an art gallery.  The featured artist was Don Greytak, one of America’s foremost pencil artists.  His works truly capture men, women and children in every day scenes.  If you ever have a chance to see his work … don’t miss it! 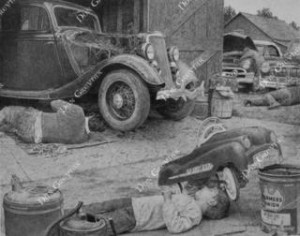 As with other small towns we had the opportunity to visit during the past couple of years we’ve been RVing, those we have seen on this trip traveling US Route 2 across the upper Midwest, we’ve come to have a far greater appreciation and sense of awe for the people and places away from the cities and off the Interstates.

On other trips, you could almost be guaranteed to see a Dollar General or Waffle House in every town you passed through.  On this trip, however, the most frequent landmark has been 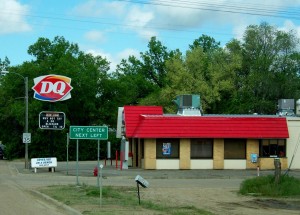 whose menu now includes a variety of foods other than ice cream.

The one sobering feature of our route has been the occasional roadside crosses, indication where one or more people lost their lives in traffic accidents. 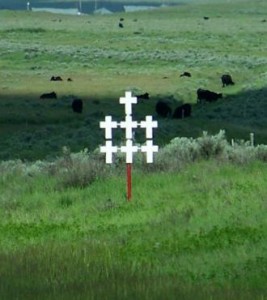 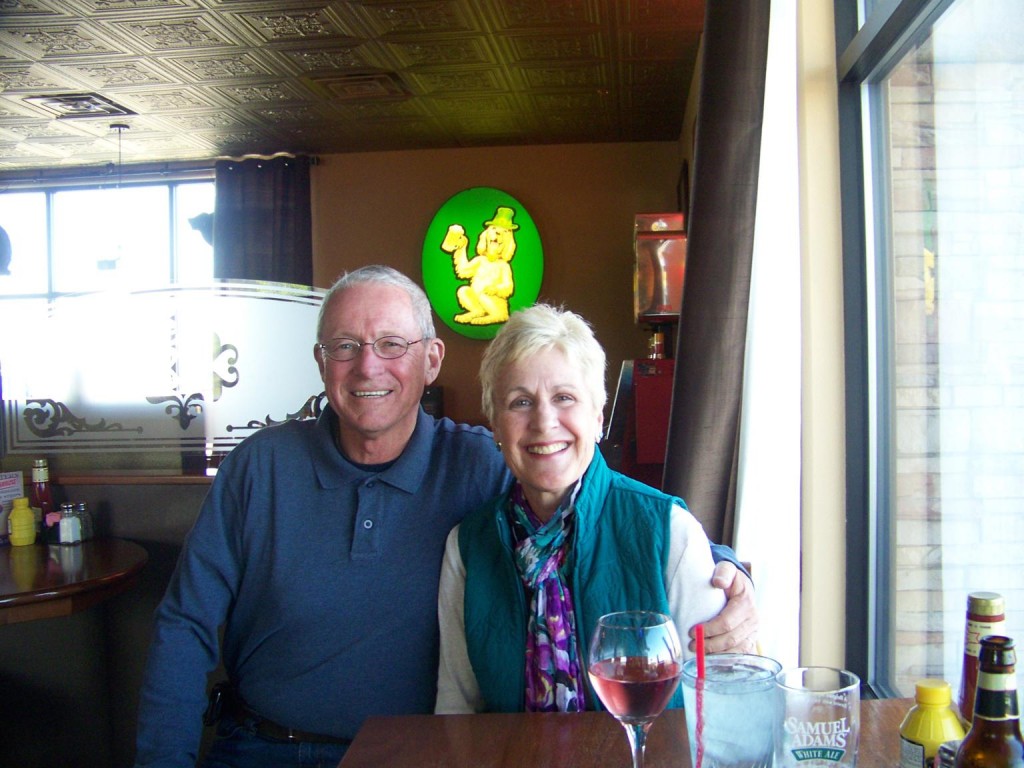 Interestingly, on the way to the restaurant, we passed a light blue 1963 Chevy Corvair Monza convertible, identical to the car we had during our courtship … Kismet?