In 24 hours, yesterday’s sunrise had morphed into a windy downpour!  Nevertheless, after waiting out the heaviest of the precipitation, we headed out to complete a tour of the central part of the island.

Our drive took us through more farm lands, 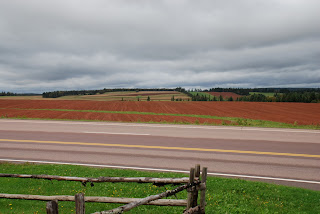 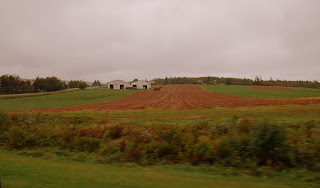 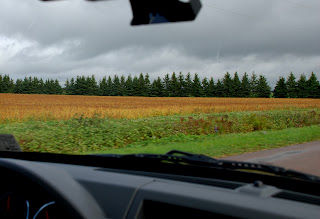 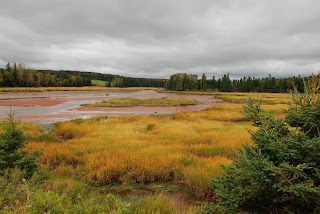 past the school where Lucy Maud Montgomery taught for many years 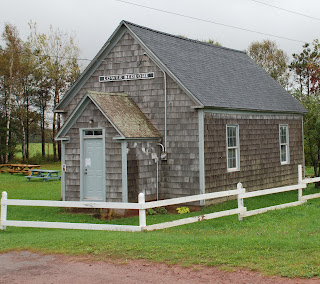 and past some unconventional traffic 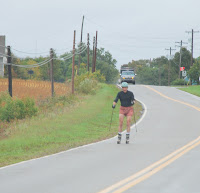 And, there is much of Prince Edward Island still to be explored, some observations about this beautiful island:
1.  The vast number of mailboxes seem to have the property owner’s first and last names. 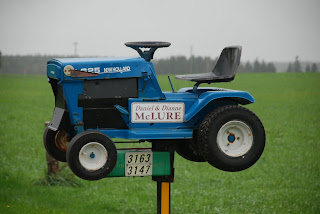 2.  At gas stations, the term full service hearkens back to the days when the attendant spoke to you and washed your windshield.

3.  We continue to see nearly every home’s lawn neatly mowed and many of them have either large rocks or small sections of white fence in the middle of the front lawn around which are planted flowers and shrubs.

4.  Poutine can be found on most menus.  It is a artery-clogging concoction of  french fries, covered with cheese and smothered in gravy!

5.  At least 90% of the cemeteries have exquisite water views which, unfortunately the “residents” fail to take full advantage of.
6.  Many homes have ladders permanently affixed to their roofs.  This enables the owners to [more] safely get up to the peak to clean their chimneys if they are burning wood.
7.  Numerous homeowners have set-up roadside kiosks selling everything from fresh vegetables to pumpkins to firewood to bird houses (to name a few).  There is typically a small sign asking buyers to leave their money in a unattended jar which generally have money in it left by prior purchasers.  How many of us would do that?
8.  In many, regretfully if not most, rural parts of the United States, and even New Brunswick (which we left only yesterday), you see a great many homes with yards littered with abandoned cars, rusting appliances and a collection of other “junk”.  Thus far, after passing by as many as 500+ homes in “rural” PEI, we’ve seen only one such home.  The island is conspicuously clean!
9.  For an island whose area is just shy of 2,200 sq. miles (only 175 miles end-to-end), it supports 33 gorgeously-maintained golf courses.
10.  Some 300 churches, with as many architectural variations (although predominantly painted in white with black and/or red”trim) serve the population of just over 141,000. 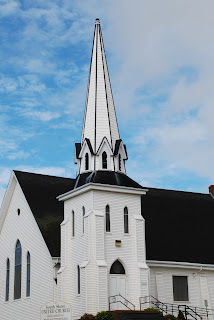 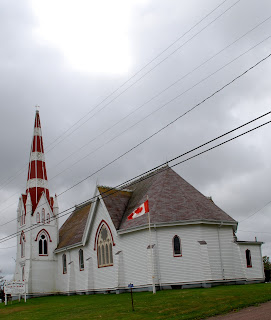 11.  The traffic lights are a bit different (Red lights are square, Yellow are diamond-shaped and Green round).
12.  There are more than 50 lighthouses on the island, more than 40 of which are still in active service as navigational aids.  They sit on small rock islets,at the end of jettys or ashore. 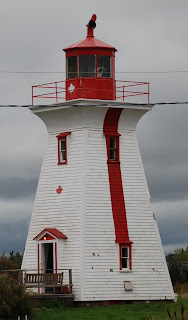 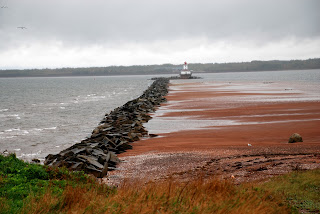 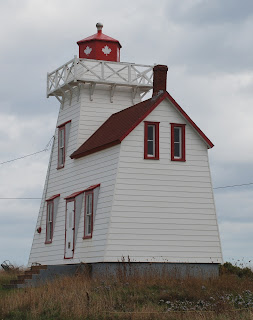 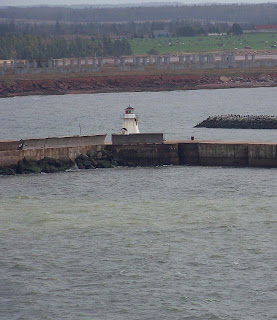