Posted on October 3, 2010 by Dick
Today we set out to see the northwest third of Prince Edward Island.  This section of the island was flatter than the central portion we’d visited the past couple of days.  If the homes we passed (almost all of which were neat, nicely landscaped, well-maintained and had freshly mowed lawns) are any indication of affluence, then this northern section of the island is a little less well off than the Cavendish and Red Coast areas.
Almost immediately, my well honed theory about the exterior painting of churches went out the window when we passed a beautiful beige church. 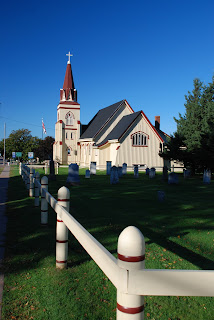 in the center of Stanley Bridge.
From there our route took us through Summerside, the second largest town on the island and home to one of the only two Walmarts on PEI.  Heading east our first stop as we headed through Acadian country (anyone remember reading Longfellow’s “Évangeline“?) was in Mont Carmel where we stopped at an magnificent Roman Catholic Church, Notre-Dame du Mont-Carmel, overlooking the Northumberland Strait between PEI and New Brunswick
Just a few miles up the road … after overtaking a local 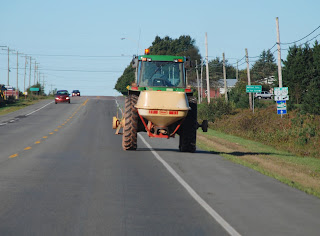 we drove just up the road a few kilometers (each one equal to 0.6 miles) to see the famous Bottle Houses.  Created by Édouard Arsenault, who began these works at aged 66, in the days before recycling he gathered bottles from local dance halls, legions, restaurants and the local dump.  The Chapel,  which has hosted both services and small weddings

was constructed from approximately 10,000 bottles.

made from 12,000 bottles and houses a working pump organ.

As we continued up the western shore before heading inland across the shore bordering the Gulf of St. Lawrence, it was apparent that the land was flatter and more forested than the central sections. However, the near total absence of any litter was noticeable!


Other observations included many houses with decorative screen doors, 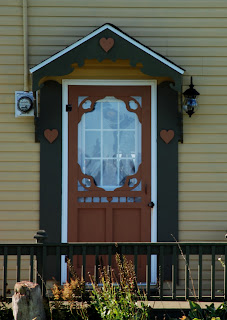 many newer and most more up-scale homes designed with attached turret structures, 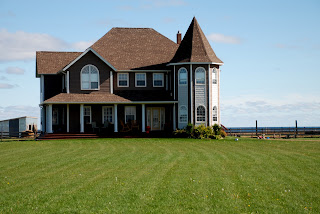 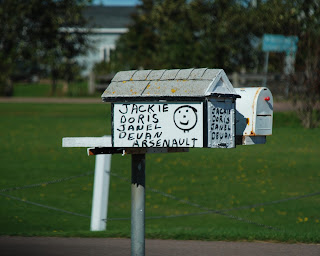 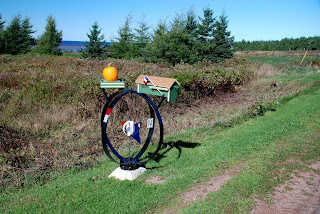 homes with miniature replicas of light houses or their own homes in the front yard, 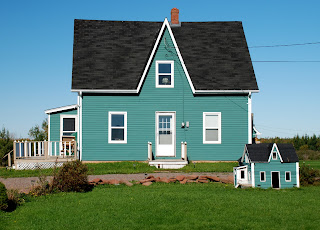 the predictable decaying and collapsed barns, typical in all farming areas, 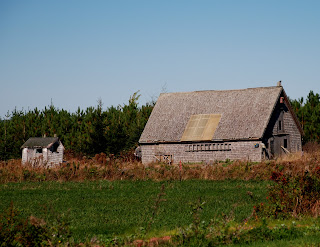 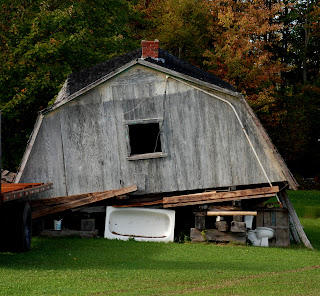 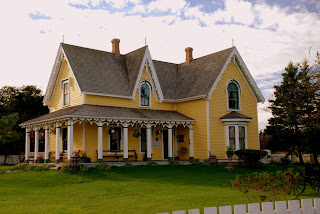 and some other buildings which somehow just missed the mark! 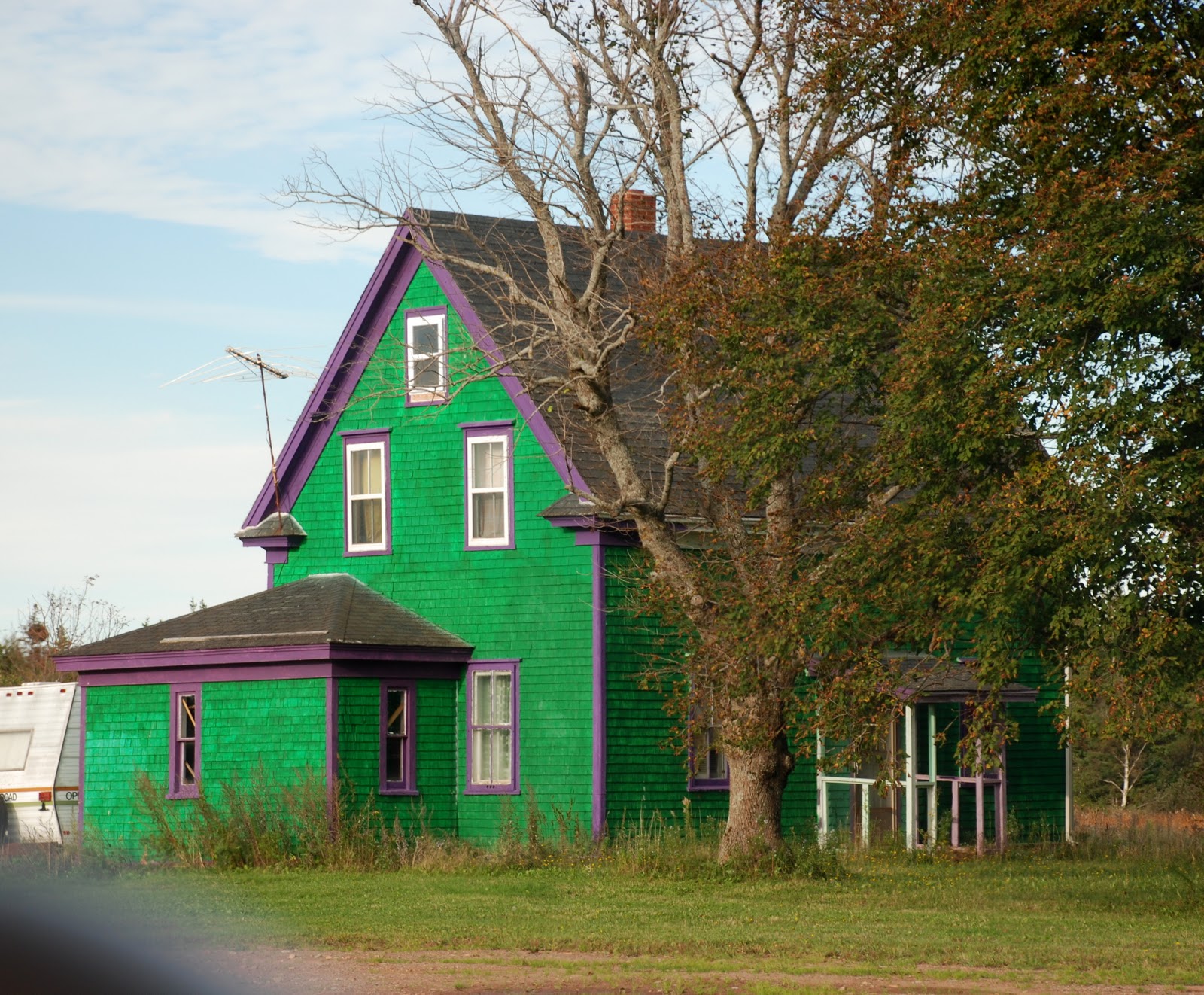 Arriving in Alberton, we were greeted by a number buildings with [mostly black and white] murals on them.

Our next stop was North Cape, the tip of the island.  Approaching North Cape, you see the skyline broken by the towers and blades of the North Cape Wind Farm, which for 25 years has been a world leader in wind energy research and development.  Many different kinds of wind turbines are in operation and help to generate 5% of PEI’s energy requirements. 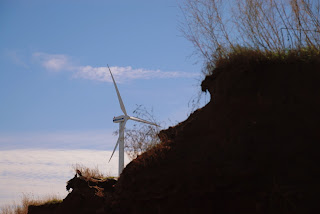 And, of course, there was a light house.

Just south of North Cape is the small town of Tingish, initially settled by the Irish.  In the center of town is another magnificent edifice.

which features a magnificent Louis Mitchell Tracker pipe organ, one of only four left in the world.

And, speaking of churches, we seemed to pass several per hour, ranging from very modest buildings to ornate cathedrals with towering spires. 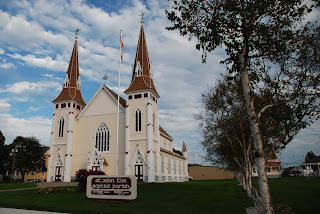 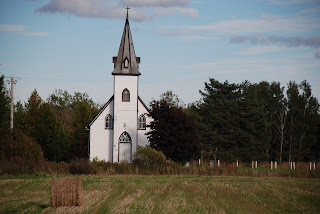 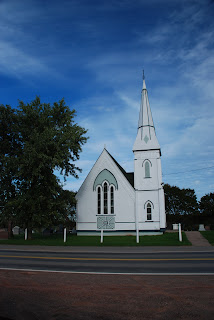 After a little digging, I discovered PEI has 2,360 miles of roadways and just over 300 churches … or on average one church every 7.8miles!  In fact, they are sometimes sitting across the street from one another, even on very rural roads. 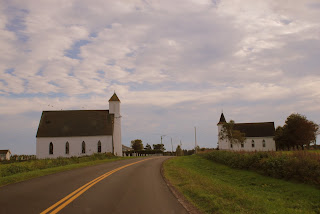 Our last stop was a West Point Lighthouse

where the red sand (the color resulting from the oxidization of iron in the soil) is very fine and soft and the water surprisingly warm. 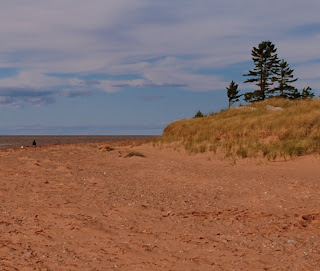 We may regret saying it, but despite driving roughly 500 miles around PEI, we have yet to see a policeman!