Debbie and I received our first COVID-19 vaccination shots this morning in Manatee County, just north of our winter campground, where we had previously registered and appointments were made on randomly on a "lottery" system. 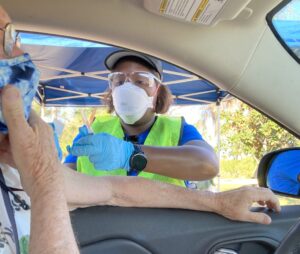 Once arriving at the park where the shots were being dispensed, everything ran like clockwork.  All we had to do was provide identification proving we were age-eligible, show proof we are "long term" snowwbirds (as there have been problems with people making appointments and driving into the state specifically for the shot and then going home immediately thereafter) and pass a temperature check.  We barely felt the needle and the post-innoculation 15 minute wait-period breezed by.  We never had to leave our car.

Coincidentally, just yeasterday afternoon, we'd also been notified our name had bubbled to the top for an appointment this Saturday in Sarasota County, where we are located and had registered a couple of weeks before doing so in Manatee County.

Interestingly, today would have been my parents 83rd anniversary … when in 1938 the two Newton, MA residents and college (Harvard and Pembrike) students secretly eloped to Nashua NH.  Duing the years we lived in New Hapshire, we traced down and found a photogrpah of the person who married them … and surprised them with a copy on their 50th anniversay.

This past week was pretty much routine, generaly beginning with our 2-plus mile walk with the Suntrekker's Walking Group..

We were exhibitors at a craft show her at Sun N Fun this past Saturday morning where Debbie displayed and sold her knitted baby blankets and a hats, and I was selling some of my photography. 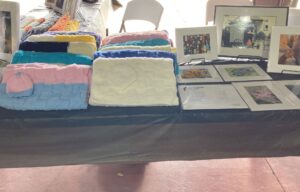 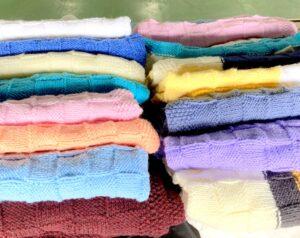 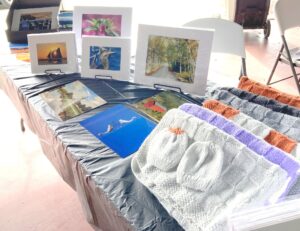 Last month, Debbie was the sales dollar winner but I eked out a victory this month!

Debbie's "highlight" was with our morning walking group which took a new route over to the Celery FIelds. After struggleing to figure out how to take a group selife, they spotted a net fisherman at one of the several lakes and asked if he could help them … which he was glad to do. 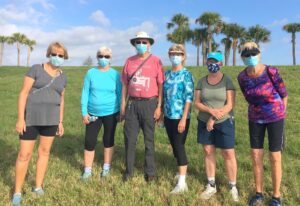 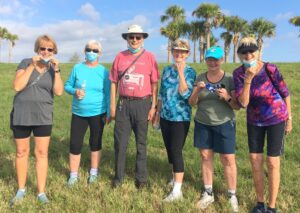 The group with their new-found friend.

As they got to chatting with him, their obvious question was, "Have you caught anything?' 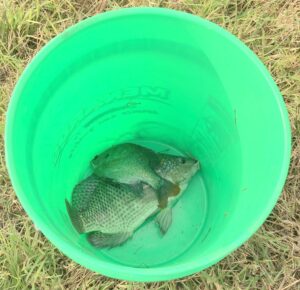 A talipia underneath a smaller [unknown] fish.

Neaby was the carcus of a Gar, 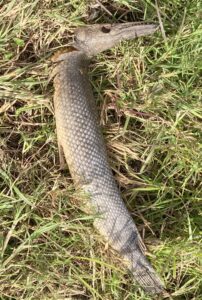 an invasive species in Florida.  When caught, prople are asked NOT to throw them back but to leave them on the shore where the birds will dispose of it.

My week started off with yet another trip to my dermatologist where he took another biopsy of a small "growth on my right cheek (hope to have the results back next Monday).

After nearly two weeks of model sailboat race cacellations due to high winds … when they exceed 15-16 MPH they are too strong for the boats … I was able to sail with the Sarasota Model Yacht Club yesterday.  I ended up with a 4th, 5th and several results we won't mention.  In fairness, many of the other dozen competitors have been sailing this class of boats for years and one is a national champion in the DF-95 Class.  Great guys and great fun! 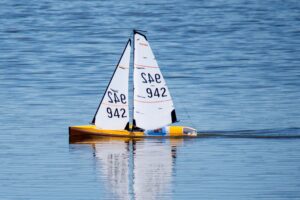 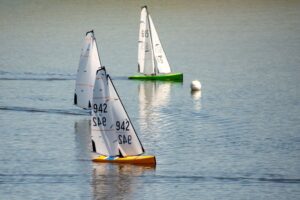 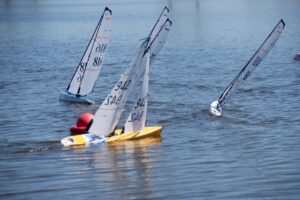 .Oh yes, our other big event was a weekly trip to Publix, our local supermarket, CVS to pick up a prescription and a side-trip to Total Wines (no explanaiton needed).