While we watched a parade of storms work their way across the country and the Polar Vortex driven chilly temperatures and even colder wind chills into the teens and even single digits, we’ve been able to endure warmer than normal temperatures, although breezy and frequently cloudy skies.

Our days, however, have not changed much, as we still are taking all reasonable precautions against any COVID-19 exposures.

Yesterday, Valentine’s Day, was an occasion for us to celebrate as it was 56 years ago on February 14th that we got engaged.  However, Debbie still remembers that I did not get down on one knee or, as far as either of us can recall, ever formally ask her to marry me.  Fortunately, as we approach our 55th anniversary this June, it appears to have worked out!

As I was just arriving at my Sarasota dermatologist for an appointment yesterday morning, I received a call from Debbie describing a tragedy for a fellow RVer parked just two streets from our site at Sun N Fun. 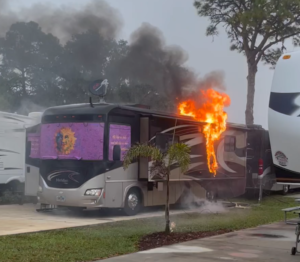 The situation was made worse as the engulfed motorhome was owned by a “full-timer” … and someone we've actually met … and who'd lost his wife a few years ago.  The owner, was actually at one of the bathhouses when the fire brokeout in his refirgerator unit.  A passing waker saw flames shoothing out of the roof and called 911, bringing a rapid response from the fire department.  Fortunately, no one of the nearby units nor his car were damaged. 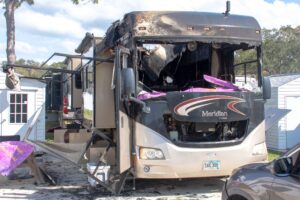 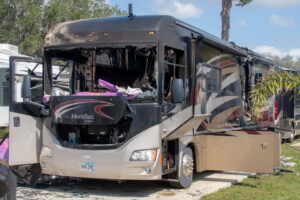 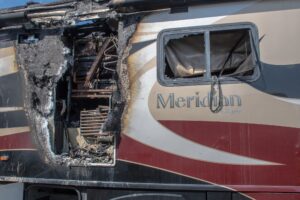 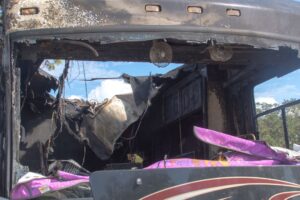 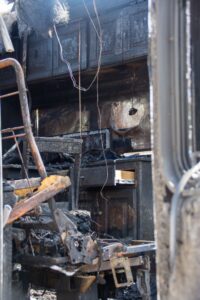 While his coach and its contents were a total loss, for some unexplained reason he had taken his cell phone, keys and wallet with him to the shower.  This afternoon, a neighbor brought over a ladder and flashlight and he was able to reach in the bedroom window to locate and retireve a Christian cross necklace which had beonged to his wife, nearly bringing tears of relief ot his eyes.

He knows how lucky he is that neither he nor anyone else was injured nor any other property damaged … and that his motorhome can be replaced.

The management here at Sun N Fun has provided him a park model to live in for the near term and any number of truly wonderful people have offered clothes and other items to help him for the next several weeks. It is heartwarming that in times of crisis, the best in people often comes to the forefront.

This afternoon, Debbie, among others, began collecting donaitons to provides some short term funding to help the victim begin to get back on his feet, collecting from so many generous people.

We’ve seen a couple of other burned-out travel trailers along the highway, but never a motorhome.

Debbie and I feel fortunate we have not suffered any major tragety during our more than 96,000 of RVing travels across the US and Canada.

This entry was posted in Motorhome Fire. Bookmark the permalink.