Returning from the Botanical Gardens, we pulled into the Boothbay Railway Village, less than 100 yards from our campground. 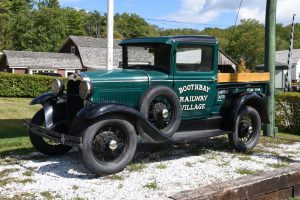 Track gauge is measured between the inner faces of the load-bearing rails. Gauge matters because all of the equipment running within a network needs to have running gear to match the gauge. The U.S. standard railroad gauge is 4 ft. 8.5 in. Maine had a unique system of narrow gauge railroads on track just 24 inches apart developed to lower the cost of railroad construction and operation, allowing them to be built in areas where it would not otherwise be economically feasible.

At their peak, the Maine Two-Footers operated on over 200 miles of track transporting both passengers and freight in and out of rural Maine. They played a key role in the timber industry as well as early tourism efforts. These companies were the smallest narrow gauge common carrier railroads in the United States.

The museum operates a fleet of steam and diesel locomotives, along with vintage and replicas of Maine narrow gauge rolling stock, on over three-quarters of a mile of two foot gauge track.

In addition to riding the train, visitors experience two authentic train stations (1912 Freeport and 1871 Thorndike) as well as 12 other buildings from Maine railroads including several car houses and a very unique octagonal crossing shanty once located in Portland, Maine. 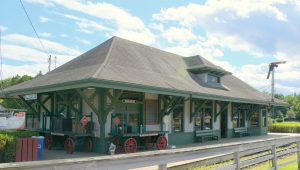 Railroad station built in 1912 by the Maine Central Railroad in Freeport, Maine.  The station was moved to the Boothbay Railway Village in 1964. 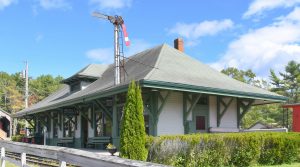 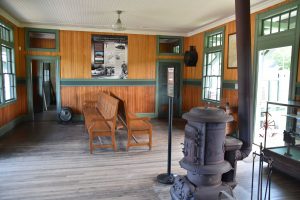 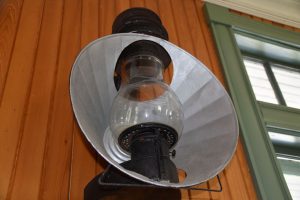 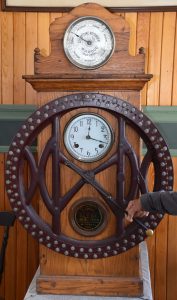 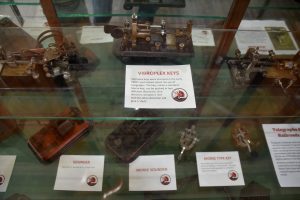 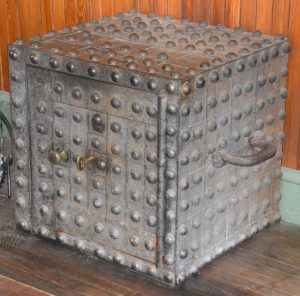 Two door Safe, weighing in over 2,000 lbs…. making it almost impossoible to move or steal 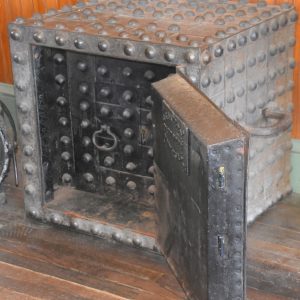 To open, one of the "bumps" on the outside had to be moved to open the slot wher the key went in – Once the outer door was opened, an inner door did not require a key 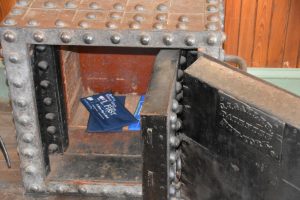 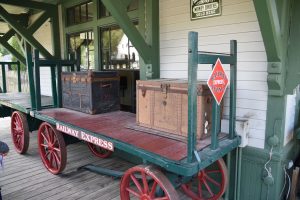 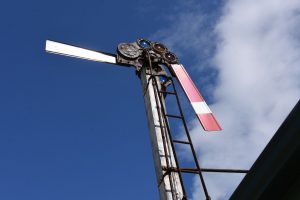 Green signal means the track ahead is clear 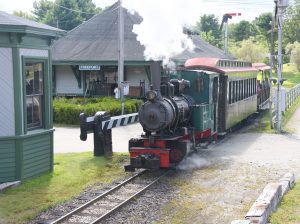 Today, the museum operates three Henschel steam locomotives (c. 1913–1938).  These particular engines were originally used on short lines for railyard and construction work.  The engine configuration is 0–4–0, meaning no pilot wheels (leading wheels) and no trailing wheels, only four driving wheels.  Their steam locomotives are fired with coal and operate with a boiler pressure of 100 to 150 psi.  The water is stored in the frame under the boiler, between the wheels.  Each locomotive weighs approximately 10 tons.

A 1940s Whitcomb diesel locomotive joined the fleet in 2016.  Although historically the Narrow Gauge railroad lines didn’t last long enough to convert to diesel, the Maine Central and Belfast & Moosehead standard gauge railroads (which our historic stations and associated buildings served) did.  Diesel locomotives gained favor with American railroads starting in the 1930s.  They were easier and cheaper to operate and helped the railroad industry continue to compete with trucks, planes and automobiles.  Whether powered by our steam or diesel locomotives passengers ride aboard vintage and replicas of Maine narrow gauge rolling stock, on over three-quarters of a mile of track. 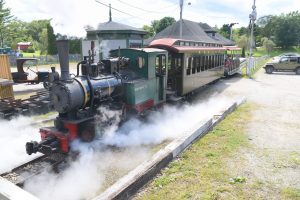 The Main Central Railroad Company was organized in 1862 in Waterville, ME.  The main line ran from Waterville to Portland, via Augusta and Brunswick and was known as the “Lower Road”.  Over the next several decades, Main Central acquired other Maine railroads.

The Calais Branch between Bangor and Calais was originally built in 1832 with woden rails and horse-drawn power.  This was the first railroad built in the state of Maine.  In 1871, the railroad changed from wide gauge (5’ 6”) to standard gague (4’ 8.5”). 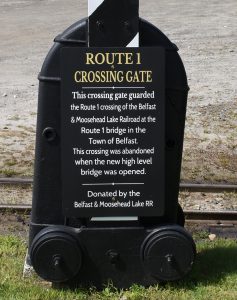 The crossing gate guarded the Route 1 crossing of the Belfast and Moosehead Lake Railroad of the Route 1 bridge in the Town of Belfast. 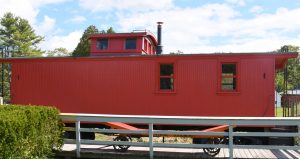 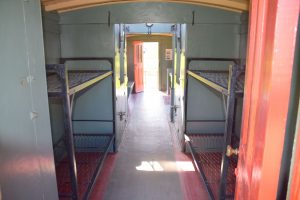 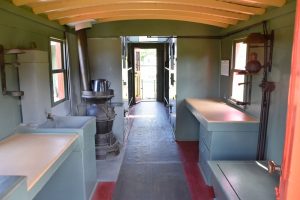 As it was getting late in the afternoon and with dinner plans with Sue and Bob, we opted to pass on touring the heart of the Village itself.

Historically significant structures house artifacts and displays of rural Maine from the mid-19th through the mid-20th centuries. The village transports the visitor to a time well before computers, cell phones and even television.

The Village Green – Historically, village greens or commons were an important aspect of village life.  Greens could provide grazing for animals or gardening areas for villagers.  They were gathering locations for celebrations and debates.  The village is arranged around our Village Green.

Boothbay Town Hall – Circa 1847. The earliest structure on the Museum grounds.

Spruce Point Chapel  – Circa 1923.  The Chapel was relocated from the Spruce Point area of Boothbay Harbor in 1995.  Well-to-do summer residents largely funded this restored chapel and schoolhouse, providing a place of worship for their staffs and a Sunday school for local children.

Stover’s Salt & Pepper House -Unique collection of shakers has over 600 sets that include a variety of designs.

Farm Equipment Shed – Included in this exhibit are a 1930 Farm all F-12; 1927 Fortson tractor (powered by a Model-T type drive train); 1953 Oliver V-Plow tractor outfitted with a Sergeant V plow built in Portland, Maine (donated and once used by the Town of Southport), 1950 Huber road-grader and other equipment.

Dingle’s Store – A typical turn of the century general store. displaying a variety of dry goods and tin containers of tea, crackers, and other wares.  A peanut roaster and a coffee grinder are also on display. It was named for Bob Dingle who donated several artifacts and assisted in the founding of the Museum.

Carriage Display – This exhibit includes carriages from mid to late 1800’s such as a Portland cutter, a Victorian, and a Mail coach.  Also on display are various wagon accessories, horse treadmills to provide power on the farm and ice harvesting tools.

Barrel House – A collection of necessary barrel making tools can be seen inside.  Barrels were one of New England’s early exports.  A versatile shipping and storage container created by soaking wood strips in water, drying them over a mold and pounding pre-molded metal rings down around the wood strips.

Blacksmith Shop – On view are a variety of tools and equipment used by blacksmiths … who were critically important to the railroad as they crafted parts essential to the train like the steam boiler and wheels.

Diorama Collection or Miniature Mechanical Parables – This collection is believed to have belonged to a traveling carnival in the 1920’s.

Tompkins’s Filling Station – This building was an actual service station once in use in East Boothbay, Maine.  It contains vintage auto parts and parts catalogs.  During this era service stations were for servicing cars and trucks and rarely sold food, snacks or coffee.

Antique Engine Display – Featuring the “Otto” and other early twentieth century internal and external combustion engines.  The large 5-ton engine was developed in the late 1800’s.  The museum occasionally operates this engine at special events.  Other sources of mechanical power include stationary steam engines, a Sterling cycle hot air engine and a variety of single cylinder stationary and marine gasoline engines plus more than 200 early outboard motors.

One Room Schoolhouse – This schoolhouse is a replica of the original, made famous by the children’s nursery rhyme “Mary Had a Little Lamb,” which is now on the grounds of the Wayside Inn in Sudbury, Massachusetts.  The desks and school supplies are turn of the century. Desks were bolted to the floor and citizenship and conduct were emphasized.

Village Toy Shop – This shop contains early toys from simple board games to dolls, to a variety of transportation related toys.

Harrington Homestead & Livery Stable – This exhibit recreates the interior of an early 1900’s house, complete with kitchen appliances such as a monitor top 1927 refrigerator, a thermostatically controlled iron and a hot water storage tank.  In addition, throughout the house are period pieces of furniture, fixtures and personal items to impart the nature of rural life in the 1900s.

With nothing else on our agenda at the moment for Tuesday, we may return to tour the Village.

This entry was posted in Boothbay Railway Village. Bookmark the permalink.