We’d hoped to get an early start this morning.  By 8:30 AM, were ready to hook up our Jeep to our motor home.  However, we were unable to shift our Jeep into a “free-wheeling” mode which is necessary for towing.

Fortunately, there was a Jeep dealer in Titusville.  They explained that we needed to first shift the car from 2-wheel drive into 4-wheel drive to permit it to become freewheeling.

While it worked … it is interesting that over the prior 18 months and 27,000 miles, we’d never shifted into 4-wheel drive and never had a problem!  We finally got underway around 10:00 AM.  Oh well!

During our drive from Titusville to St. Mary’s, 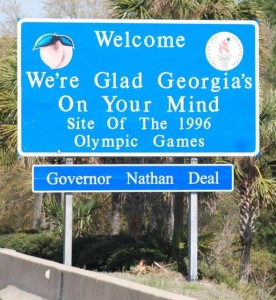 we were following an 18-wheeler carrying a load of sod when a clump fell off just in front of our motor home.  Shortly thereafter, a car passing us began beeping its horn and pointing at our vehicle.  After pulling over, I got our and during a walk-around inspection noticed that one of our “basement” compartment doors was wide open!  During the majority of the trip, we were again buffeted by high winds, this time from the East … wanting to shove our motorhome into the left lane, making driving more of a challenge than I’d have liked.

Just before reaching our destination, we were approaching a traffic light when Debbie noticed what appeared to be some black plastic blowing across the road.  As we got closer, it quickly became apparent that a motorcycle rider dressed in black and operating a black motorcycle had taken the corner too fast and he and his bike were tumbling across the road and median strip.  Fortunately, they avoided any other vehicles and he appeared unhurt was we passed him, although his motorcycle likely had some damage.

Finally, with the day’s excitement behind us, we arrived safely at a small but lovely RV park 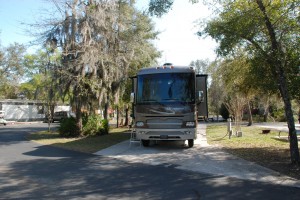 where we will spend the next two days and where some of our immediate, two-legged neighbors are very noisy at times! 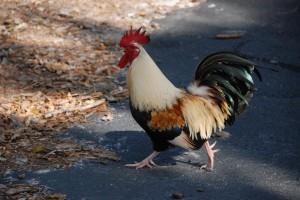