May 6 – Jacksonville, Hilton Head and some RV Issues

We got an early start yesterday morning and, as it was a Sunday, the traffic was relatively light.  All went smoothly up unitl we stopped for gas in Dade City.  However, shortly after leaving the gas station we noticed a "Check Engine" warning light on our dash. 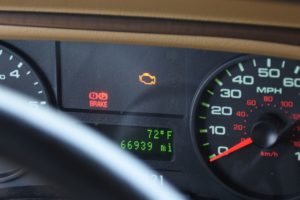 We pulled in at the next rest area and browsed through the Ford V10 engine manual … and determined that as the warning light was steady and not blinking we were likely OK to continue on our way, which we did.  We also discovered that our problem was mild compared to seveal other motorists we passed. 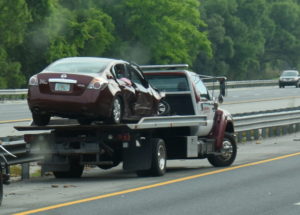 As the corpuses on our windshield could attest to, the lovebug mating season was underway and pairs of them were flying

Meanwhile the weather forecast of rain moving across the I-75 corridor proved accurate, first we some intermittent light rain 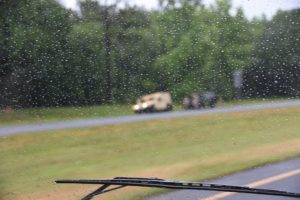 followed by a torrential downpour droping visibility to less than ¼ mile. 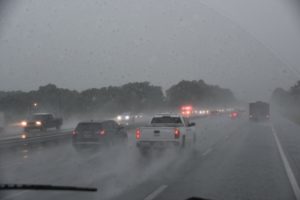 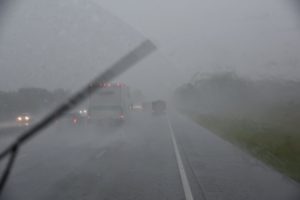 We arrived safely in Jacksonville 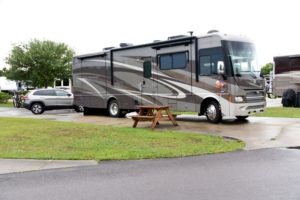 and with some trepidation, turned our engine off, not knowing if we'd have trouble stariting it.  As a result we opted not to put our jacks down or slides out, as retracting them in the moring would be impossible without the engine running.  While hooking up the electicity, I noticed that I had somehow negelcted to close the cap to our gas tank when we'd filled up … likely the casue of our Check Engine light.

Last evening we met my cousin Lindsay and her husband Phil, whose wedding we'd attended a year ago this past March, for a wonderful dinner. 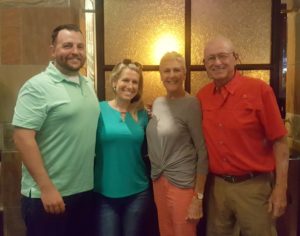 This morning, a fellow RVer I met told me he had an auto code reader, which when plugged in could diagnose a car, truck or RV's problems. The code read "2629", an O2 sensor (Greek to us).  However, we were able to reset the Check Engine light so that it did not reappear, and the engine started right up with no warning light.  So, I canceled the trip to a local Ford dealer I'd made for later this moring, and we continued our northward journey through 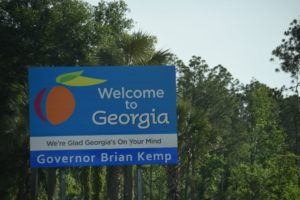 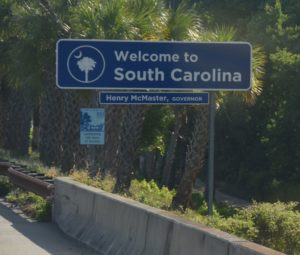 Although no rain today, we saw far too many ambulances racing in the opposite direction with lights on and sirens wailing. 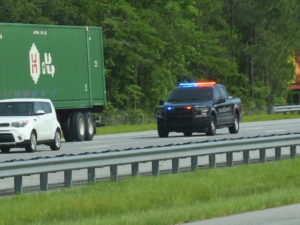 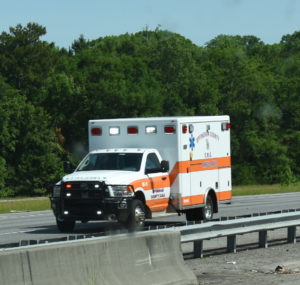 Meanwhile, the lovebugs continued to take aim at our windshield 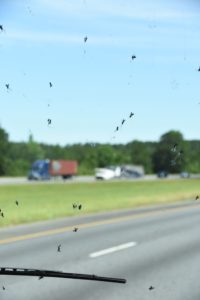 and, unfortunately our Check Engine light reappeared, again just after filling our gas tank (although I had secured the gas tank cap this time).  And by the time we reached our campground on Hilton Head we also noticed an odor.

Once in our site, 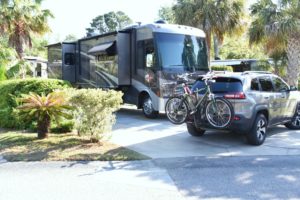 we faced a nearly hour long effort cleaning today's accumulation of dead lovebugs off the front of our coach.  Walking around the park we noticed some other recent arrivals cleaning the front of their RVs, while other people appeared to ignore those on their units. 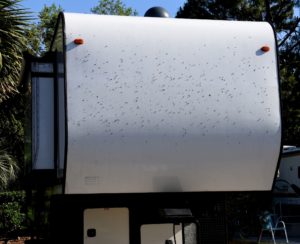 After several calls, we found a Ford truck service center where we could get an appointment for tomorrow morning, although we'll have to backtrack to Savannah … assuming the coach starts, we can pull in our slides, retract our jacks and get underway.

Other than that, it was an uneventful day which ended with a glass of wine and dinner.