However, as Doug is turning 50 (where have the years gone?) we made a last minute decision to fly home and surprise him and fly up on the 3rd.  We discovered the Frontier 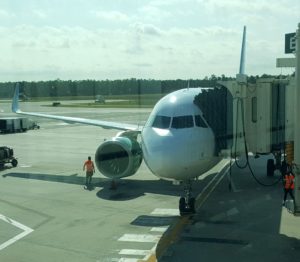 flies out of Ft. Myers to Trenton, NJ, just five miles from our home.  And, although the Ft. Myers airport is a bit futther away than going to Tampa, there is infinitely less traffic getting to Ft. Myers where parking is much better and the airport, itself, smaller and more pasenger-friendly!

Our flight path took us along the New Jersey side of the Delaware River where we had a great view of Philadelphia. 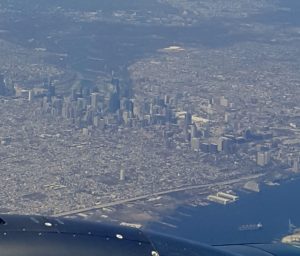 Our next-door neighbor, Gilles Vanesse, was kind enough to pick us up.  Once home we discovered Debbie's car battery was dead.  However, another next door neighbor, Phil Kauff loaned us a battery charger.

With the car running, we headed for Doug's in Bala Cynwyd, just west of Philly … where we totally surprised him! 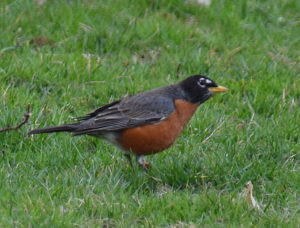 we enjoyed spending time outside with Doug, Meg, Calleigh and WIll. 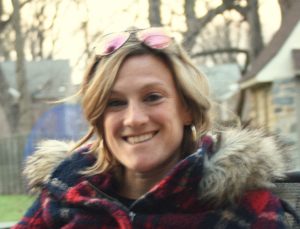 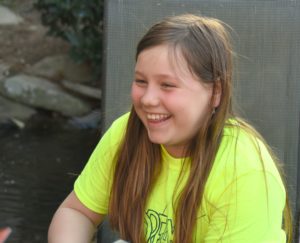 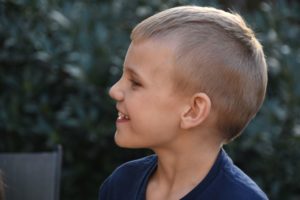 Thursday was Doug's birthday and lunch with he and Meg while the kids were still in school.  Later that afternoon, it was time for presents 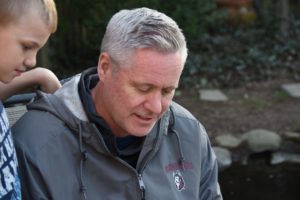 Will watching dad open his cards 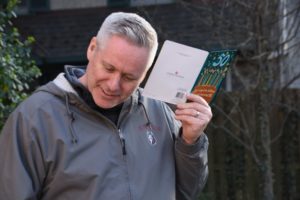 Doug listening to an exceptionally long audio card from Will 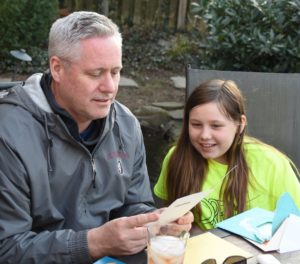 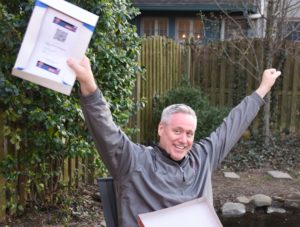 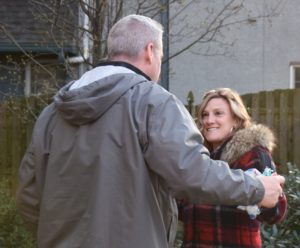 and after dinner what else but a cake. 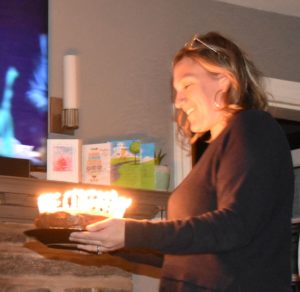 Beginning to look like a bonfire atop the cake 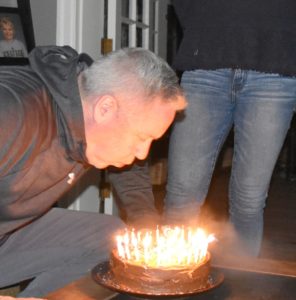 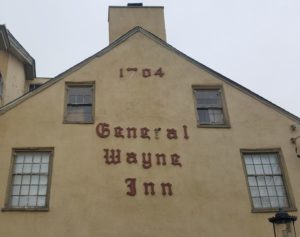 The General Wayne Inn, established in 1704, it was previously named the William Penn Inn, Wayside Inn, Tunis Ordinary, and Streepers Tavern before being renamed in 1793 in honor of American Revolutionary War hero General "Mad" Anthony Wayne who had once stayed there. 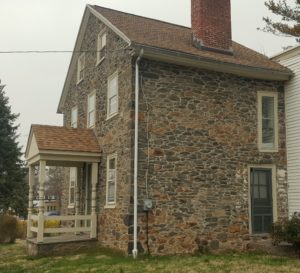 The home of John Dickinson (1732 – 1808), was a solicitor and politician from Philadelphia known as the "Penman of the Revolution" for his twelve Letters from a Farmer in Pennsylvania,  published individually in 1767 and 1768.  As a member of the First Continental Congress where he drafted most of the 1774 Petition to the King, and then, as a member of the Second Continental Congress, wrote the 1775 Olive Branch Petition.

When these two attempts to negotiate with King George III of Great Britain failed, Dickinson reworked Thomas Jefferson's language and wrote the final draft of the 1775 Declaration of the Causes and Necessity of Taking Up Arms. When Congress then decided to seek independence from Great Britain, Dickinson served on the committee that wrote the Model Treaty, and then wrote the first draft of the 1776–1777 Articles of Confederation and Perpetual Union.

He also wrote "The Liberty Song" in 1768, was a militia officer during the American Revolution, President of Delaware, President of Pennsylvania, and was among the wealthiest men in the British American colonies.  Upon Dickinson's death, President Thomas Jefferson recognized him as being "Among the first of the advocates for the rights of his country when assailed by Great Britain whose 'name will be consecrated in history as one of the great worthies of the revolution.'"

Together with his wife, Mary Norris Dickinson, he is the namesake of Dickinson College (originally John and Mary's College), as well as of the Dickinson School of Law of Pennsylvania State University 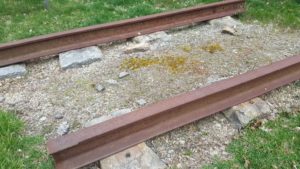 The only remaining tracks from the Philadelphia & Columbia Railway, one of the earliest railroads in America and the first in the world to be built by a government rather than by private enterprise. The contracts for the work were granted by the Canal Commission, under whose supervision the line was operated. Considered a public toll road, individuals and companies paid tolls to the Commission for use of the rails. They also supplied their own horses, rolling stock and passenger or freight facilities.

The Philadelphia & Columbia Railway finally became operational on September 1832, with carts and wagons dragged by horse power on a 20-mile section which began in Philadelphia (at Broad and Vine Streets) and ended at Green Tree Inn, west of Paoli.

The first passenger cars were constructed on the same general design as the stage coaches and were nicknamed “fireflies,” so designated because of their brilliant red color. They were drawn by two horses, recruited from the Conestoga wagon traffic.

When the idea of locomotives was first conceived, there was great opposition on the part of those who either used the railway or lived near it. They declared that the engines would destroy the value of their property, and that the sparks from them would set fire to their houses and barns. It was not until April 1834 that the first train was drawn from Philadelphia to Lancaster by a locomotive, named the “Black Hawk.” Not until 1836 did locomotives finally displace horsepower. The Baldwin locomotives worked the best. The English ones, while well built, were found too light for the heavily curved and graded American tracks.

Eventually, “The Main Line” expanded from the Philadelphia & Columbia Railway to include the Eastern Division of the Canal (from Columbia to Hollidaysburg, 172 miles); the Allegheny Portage Railway (from Hollidaysburg to Johnstown, 36 miles, crossing the Allegheny Mountains); and the Western Division of the Canal (from Johnstown to Pittsburgh, 104 miles). This network carried passengers, but its primary purpose was freight.

The railroad was a major route for escaping slaves crossing the Susquhanna River from Maryland.  As the freight cars passed the nearby Meetinghouse, several Quaker families who operated "safe houses" placed food and water in the cars for the escaping slaves.

This section of tracks is laid upon the original "sleeper stones" which were uesd to support the rails. 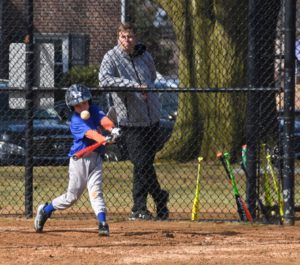 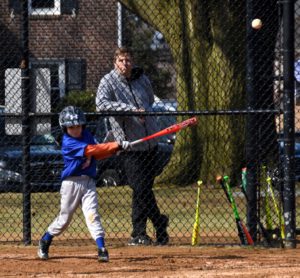 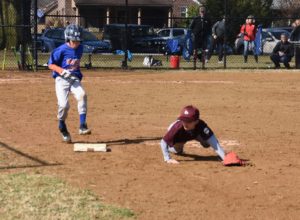 and then Calleigh's softball game. 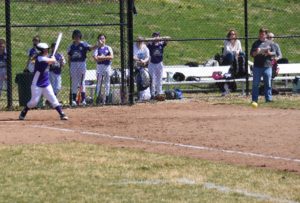 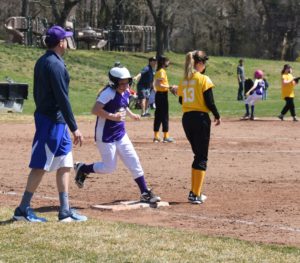 From there we drove to Oceanport, NJ to see Scott (who had celebrated his 48th birthday earlier in the week), Krista, Kira and Sean. 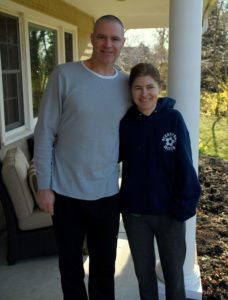 Sunday morning, it was back to Langhorne to drop off our car at the house afterwhich Irv Perlstein was kind enough to give us a ride back to the airport in Trenton.

On our climb out we were unable to see our home but I was able to spot Makefield HIghlands where I play golf when home.

We arrived in Ft. Myers ahead of schedule and were back to our motorhome by 6:30 PM.