I opted out of the campground's waffle breakfast and headed home a little earlier than planned, knowing that we had to traverse Washington DC, Baltimore, WIlmington and Philadelphia … always the worse 287 miles due to traffic and road conditions.

Again, as was the case during the past two days, the police were out in force. 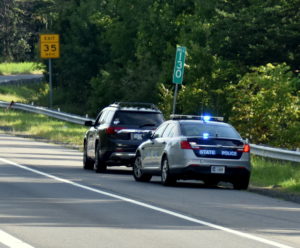 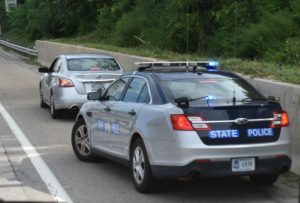 Then … your guess is as good as ours! 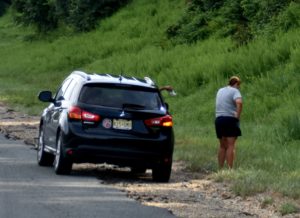 Before the northbound traffic came to one of its several unexplained halts, we saw it backed-up in the southbound lanes. 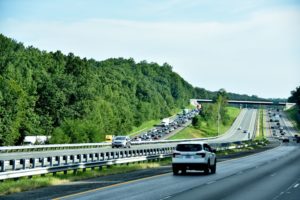 Later, while sitting creeping along at less tham 5 MPH, several cars, including a red sports car flew past us in the breakdown lane.  Hate to admit it but people like htat really annoy us.

But … for a change, there is justice! 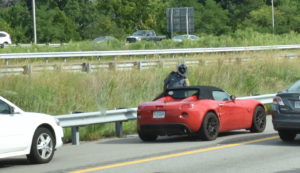 Despite the fact is was a Saturday morning, the traffic from about 50 to 20 miles from south of the Potomac River was, again, a nightmare.  While the volume of traffic seems to inexorably increase; more and more drivers treat the road like a skier's slalom course, weaving from lane to lane and cutting other drivers off in the process; as noted above, using the breakdown lane and even the shoulders when no other options are available; the clear lack of directional signals on most vehicles … as so motorists actually use them; drivers backing up in the breakdown lane when they've missed thieir off ramps; and other motorists who sudenly veer from the passing lane across two or three other lanes of traffic to an exit ramp.

Unfortunately, and having traveled across the country several times, while the lack of safe and courteous driving is not limited to Virginia, it seems to be noticably more prevelant from the Mid-Atlantic to Boston area.

The most notable sights were the open drawbridge 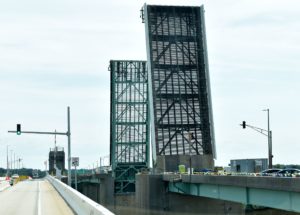 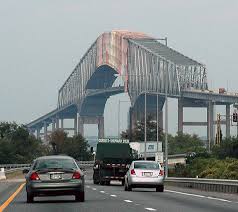 The Francis Scott Key Bridge, also known as the Outer Harbor Bridge or simply the Key Bridge, is a steel archpshaped continuous through truss bridge spanning the Patapsco River.  The main span of 1,200 feet is the third longest span of any continuous truss in the world.  Named for the author of the Star Spangled Banner,the bridge is the outermost of three toll crossings of Baltimore's Harbor.  It is 8,636 feet long and carries an estimated 11.5 million vehicles annually. This bridge is a designated hazardous materials truck route, as HAZMATs are prohibited in the two tunnels. 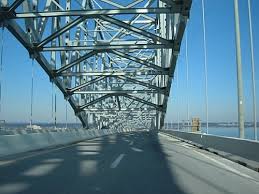 The trip through Maryland is other wise notable for another traffic tie-up north of the bridge. 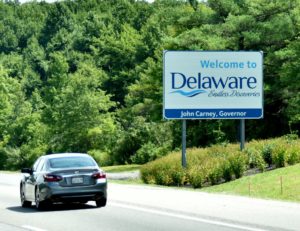 where we pulled into the resat are to grab lunch, where we spotted a vehicle that it appeared was being used as a home for its owner, 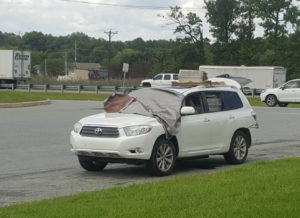 before heading out into yet another traffice slow-down.

Finally, we were back in 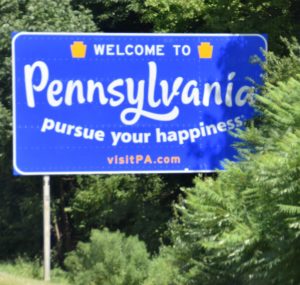 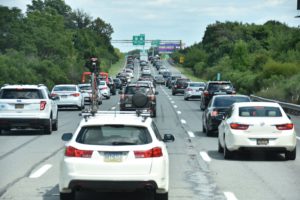 and a car which went roaring past us at well over the speed limit!

After arriving back at Shady Brook and unloading our motorhome, it was time to take it back to the secured lot where we store it … just 4½ miles away.  After a nearly three month trip across 28 states and 8,640 miles of driving,… and some 88,000 miles of accident-free RV driving…  less than a mile from our storage lot, I misjudged a curb on a road with virtually no traffic 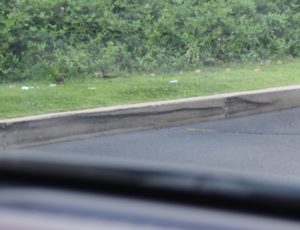 resulting in sufficient damage to require having to reaplce a rear tire. 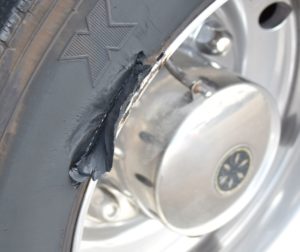 We were able to park our motorhome where it will sit until we leave for Florida at the end of the year! 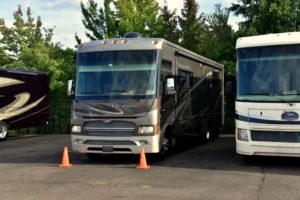