Thursday – I spent most of the day at the rehab facility with Ken while Debbie and Cheryl took a "girls day out", getting a pedicurer, doing some shopping and just chillin' out at our motorhome. While at the mall, they ran acorss a most interesting classic car show. 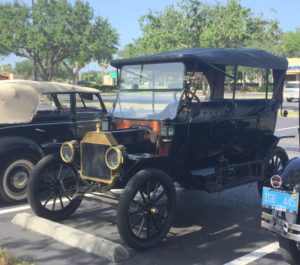 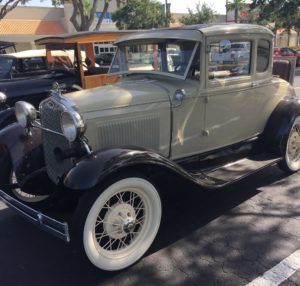 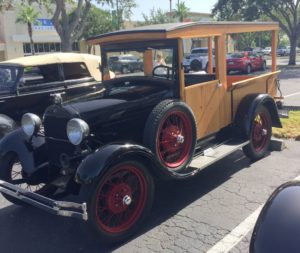 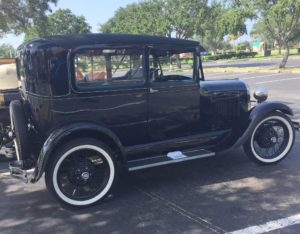 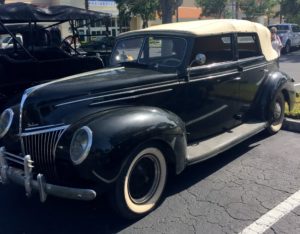 I am sorry I missed it!

While back on our RV, Debbie and Cheryl were suddenly aware of a loud noise just outside and were sruprised to see a young man … who Debbie thought looked about 12 … with a mini-backhoe breaking up the concrete pad next to us. 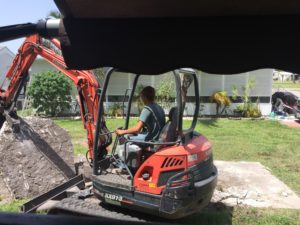 She was concerned that he might actually hit our RV.

However, he did his job like a pro, removed the concrete, added cravel and elveled the site 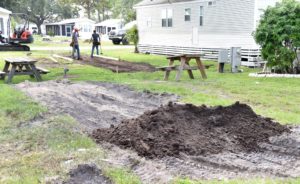 in preparation for the forms to be installed by the end of the day.

Meanwhile, I had scheduled a mobile RV service to stop by to see if he could help me discover where we were getting some water infilltration during heavy rain storms, resulting in a couple of small leaks over our dash.  While Jim Smith sealed several suspected area 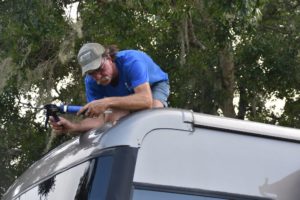 I trimmed the live oak and the Spanish Moss draping down from it and massaging the roof our RV. 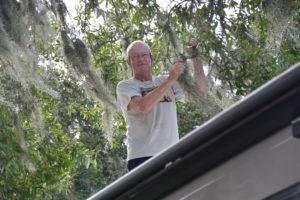 Friday – Again this moring, after our walk, we enjoyed our first … and second … cups of coffee on our "patio" before the humidity got to oppressive. 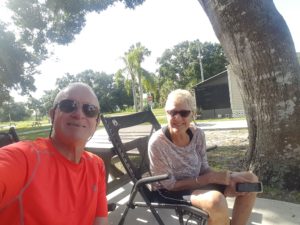 Soon thereafter, a concrete truck arrived to pour a new concrete patio slab in the site next to us. 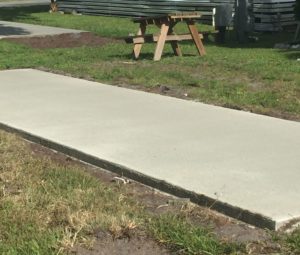 Ken and Cheryl's daughter, Kim, and husband, Terry, had flown in yesterday afternoon.  The five of us spent most of the day with Ken. Terry, Ken and I playing around-robin cribbage match. 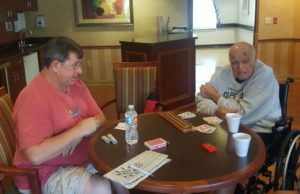 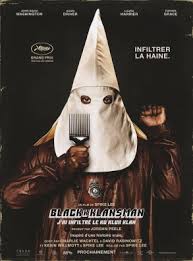 This was an extremely well-done movie … and based on an incredible true story.

It tells the story of Ron Stallworth, the first African-American detective to serve in the Colorado Springs Police Department.  Determined to make a name for himself, Stallworth bravely sets out on a dangerous mission: to infiltrate and expose the Ku Klux Klan. As face-to-face encounters with the Klan are imperative, he recruits a more seasoned colleague, Flip Zimmerman, into the undercover investigation of a lifetime. Together, they team up to take down the extremist hate group as the organization aims to both sanitize its violent rhetoric to appeal to the mainstream and assassinate a local college black student organizaiton president.

At the same time, the movie was disturbing as it make the view realize that vicious raical, religious, ethnic and sexual-orientation hatred adn bigotry depicted is not artificial but has significant roots is all too many segments of our society and, regretfully not being adequately confronted by our government.