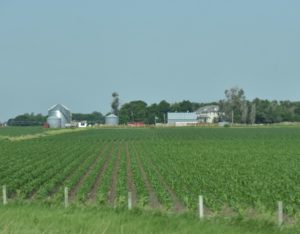 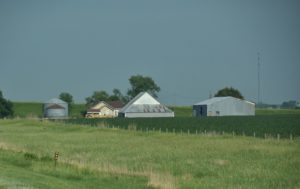 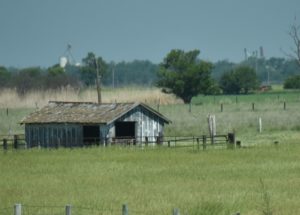 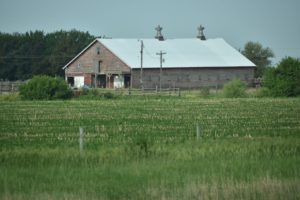 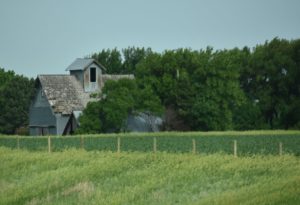 However, when we stopped at a rest area in Cardoz, NE, we discovered we were close to the 100th meridian, an arbitrary line .which bisects the Great Plains and separates the arid western states from the moister eastern states.  The divide also determines what crops have been cultivated, with moisture-loving corn grown in the eastern states and wheat in the West.

The scientists concluded that a change in weather patterns in response to climate change indicates the imaginary line has shifted east about 140 miles towards the 98th meridian since 1980.  In Texas, that means the divide has shifted from Abilene towards Fort Worth.  While rainfall has not changed much in the northern Plains as a result of climate change, rising temperatures have increased evaporation from the soil. Meanwhile, in the southern Plains, wind patterns are causing a drop in rainfall. Researchers say it is likely that the divide will continue to shift east as the warming planet adapts and weather patterns continue to change.

Also at the rest stop was a limestone sculpture 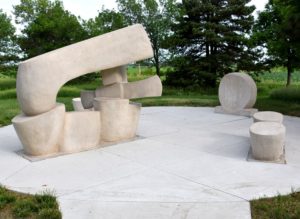 We passed beneath the Archway Crossing, which spans I-20 in Kearney 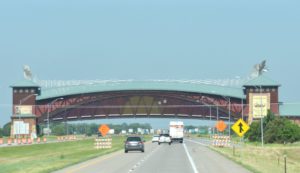 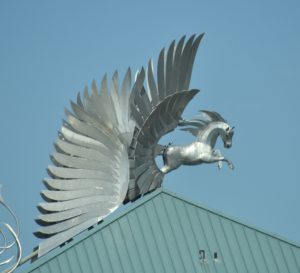 a town which also bills itself as 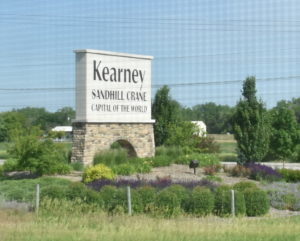 Now west of the 100th meridian, we noticed the changes … more hay than corn was grown 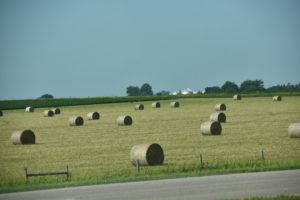 herds of cattle abutted the highway, 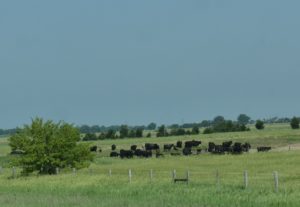 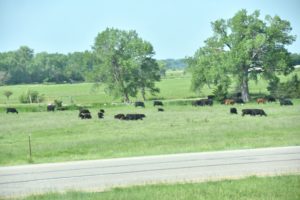 trees, other than those planted around farm buildings were in far greater numbers … 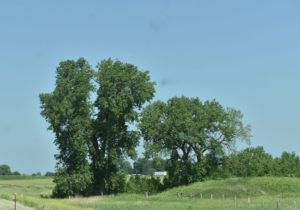 often close to the Interstate 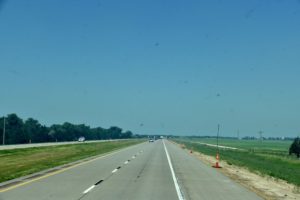 while range lands stretehed nearly to the horizon on the other side of the highway.

We noticed many small lakes immediately adjacent to I-80 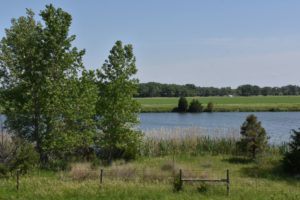 views of the south Platte River 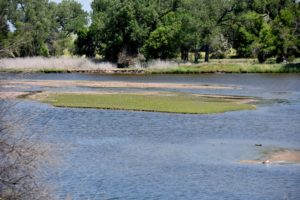 both obviously get-away destinations for campers. 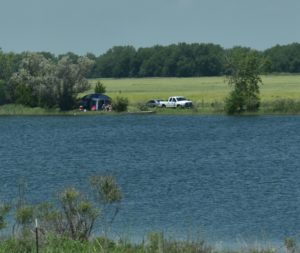 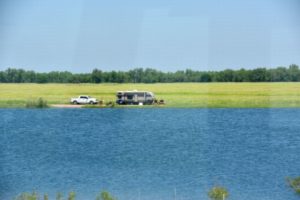 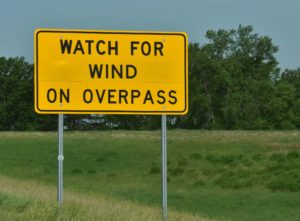 water towers in most communities, 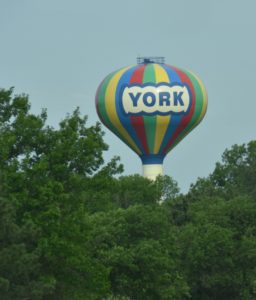 an old school bus which had been converted into a motorhome, 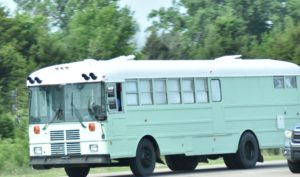 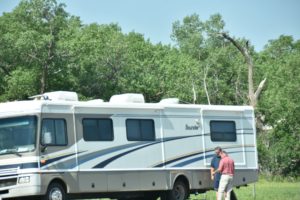 patriotic and other wind-powerd wells, 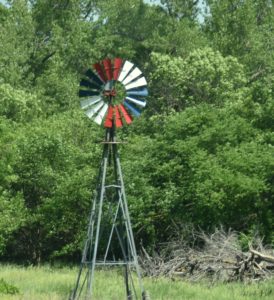 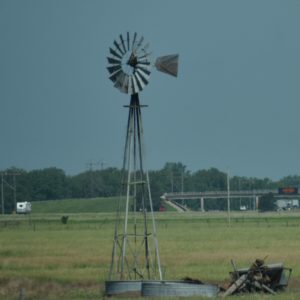 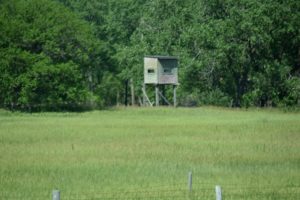 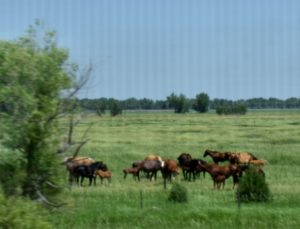 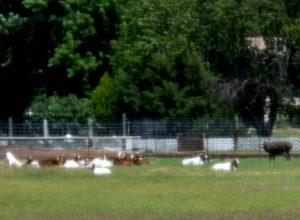 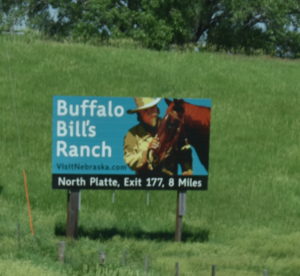 and window decals making it clear we were in "conservative" country! 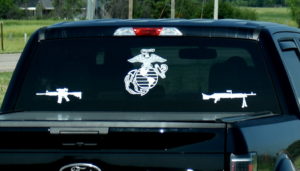 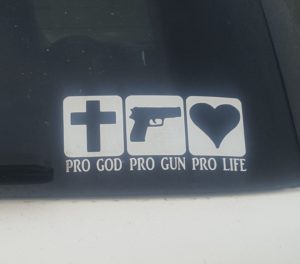 During our drive across much of Nebraska, we very gradually gained just over 2,000' in elevation.

This evening we are in Ogallala, Nebraska (population just over 4,500)… often called the Gateway of the Northern Plains; that was Ogallala from 1870 to 1885.  Hard-bitten Wyoming and Montana cattleman met in Ogallala's hotel and saloons with Texas Cattle kings and bargained over cattle prices.  Gold flowed freely across the table, liquor across the bar, and occasionally blood across the floor as a bullet brought some unlucky cowhand to his death on the floorboards of "Tuck's Saloon."

The first white men to come to this country were the trappers from St. Louis.  The trappers were able to get along with the Pawnee Indians who lived along the Republican River.  The Sioux Indians to the north, however, were not friendly and were a constant menace to the trappers.

The next people were those who followed the Oregon Trail.  To protect those people, the government established forts at interval along the trail.  Then came the Union Pacific Railroad.  It is assumed that Ogallala had its beginning about 1867.  Settlers started to follow the railroad west and cattlemen started driving their cattle to Ogallala to be shipped east or to be sold to Montana and Wyoming ranchers.

Ogallala's early history was unspectacular; it promised to be nothing but a section house and water tank for the railroad.  Then, in the spring of 1868 appeared three men to set the destiny of Ogallala.  These men were the Longergan brothers and Louis Aufdengarten.  The Lonergan brothers came to do construction work for the Union Pacific Railroad, but they found the plains to their liking, subsequently then became interested in Ogallala.

By 1876, Ogallala had changed from its infant days in 1868.  The stores were all south of the railroad tracks.  The stores fronted what was called Railroad Street.  Aufdengarten's general store was on the corner of the intersection of this street and the trail leading south to the Platte River.   Along this trail extended the rest of the town.  The town consisted of saloons with such names as "The Cowboy's Rest" and the"Crystal Palace."  The last building on the street was the "Ogallala House" the dining room was widely patronized because of its excellent fare.

The military campaign carried out by General Crook and Colonel Miles during the fall and winter of 1876 brought an end to the Indian troubles in this part of the territory.  These campaigns made sure that the Sioux Indians would be confined to their reservations.

By 1880, Ogallala consisted of one courthouse, one school, one hotel, two dwelling houses, and twenty-five permanent residents.  The tempo of living in early Ogallala changed with the seasons.   During the months of winter and early spring life was drab and dreary.  Shortly after the first of June the town began to hum with activity as the first Texas trail herds started to arrive.  During the three summer months business boomed -ten to twelve herds, each of two thousand five hundred head could be located south of town.  The presence of a hundred or more trail hands taxed the facilities of Ogallala.  Sleeping rooms and meals were hard to find when the trail hands were in town.  Activities in Ogallala continued at a fever pitch until the end of August, by then the Texans were heading back to Texas.  By November, Ogallala had settled back in quiet and peaceful repose.

Ogallala's population of floaters, gamblers, trades-people and dance hall hostesses drifted to Omaha or Cheyenne to spend the winter.  One hotel, one supply house and a single saloon remained open for the winter.  The community sank into a state of inanimation until the next spring.

From 1882-1884, the settlers and farmers reached Ogallala.  These men were encouraged by the Union Pacific Railroad to sell their land at quite low prices.

A serious epidemic of Texas fever swept over Nebraska during the summer of 1884.  The disease first appeared near Ogallala in July, apparently brought in by Texas cattle.  The disease spread quickly and it caused very heavy losses to the cattlemen.  The ranchers had started to put expensive blooded bulls in their herds.  These ranchers demanded that Texas cattle be excluded from Nebraska.  This ban of Texas Cattle was a damaging blow to the Texas trail herd business.  This was the end of the romantic period of Ogallala.  The cattle industry no longer existed and the wild-violent town was reduced to a peaceful farmer's settlement.

The cattle industry rose again but in a modified form.  Once again Ogallala became the commerce center of the Platte Valley, but it was never again the lurid "cattletown" it had been from 1870 to 1890.

Ogallala received its name from the Ogala Sioux Indian tribe.  The Indians spelled the name Ogala and they pronounced it Oklada.  The word means "scatter," or "to scatter one's own."  Ogallala has been spelled in a variety of ways such as  Ogallalah, Ogallalla, and the present spelling Ogallala.