September 13 – The Black Hills – Crazy Horse and The Needles

Leaving Spearfish, we drove through Spearfish Canyon, a beautiful setting. 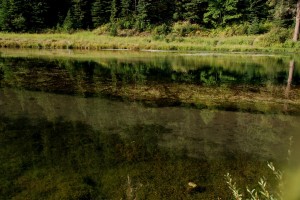 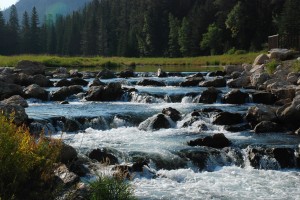 After arriving in Custer, we parked our motor home at our campground and retraced the prior nine miles of our route to visit Crazy Horse Memorial … which is a work-in-progress, as it has been since work on it began in 1948. 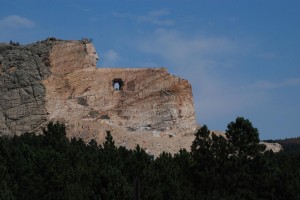 Being carved out of Thunder Mountain, the memorial honoring a Lakota Indian Leader, 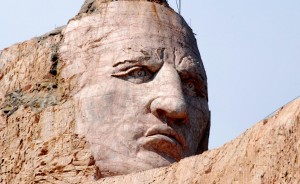 when completed it will be the largest mountain sculpture in the world, depicting “a memorial to the spirit” of Crazy Horse as he points over his horse’s head towards the lands where, in Crazy Horse’s words, his “dead lie buried.” 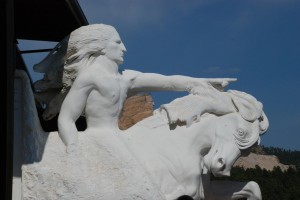 The face of Crazy Horse is 87 ½’ in height, his extended arm will reach 263’ and the overall dimensions will be 563’ high and 641’ in length.  By comparison, the four presidential faces on Mount Rushmore are only 60’high.  Incidentally, the white lines (first photo above) outlining Crazy Horse’s horse’s ear, eye and face are six feet in width!

The talented Boston-born sculptor, Korczak Ziolkowksi, was commissioned by Lakota Chief Henry Standing Bear and his tribe to begin work on Crazy Horse Monument in 1948, after settling on a suitable South Dakota mountaintop, with space for adjacent facilities dedicated to the heritage and culture of North American Indians. Crazy Horse Monument became Korczak’s life work, and although he died in 1982, his wife, seven of his ten children and a group of engineers continue to work on this gargantuan project … which is highly unlikely to be completed in my lifetime.

From there, we drove the Needles Highway, a magnificent 14 mile drive in the heart of the Black Hills.  The road climbs through the towering granite spires, pinnacles and needles. 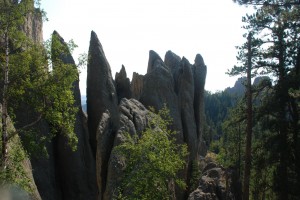 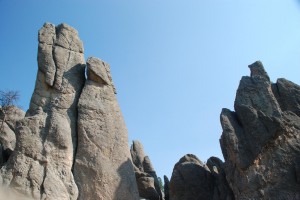 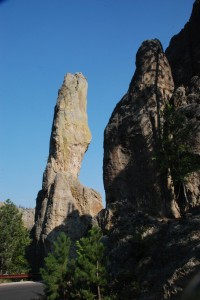 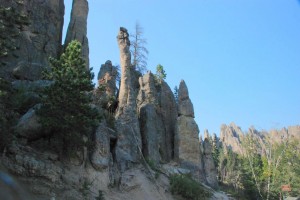 These needles, including the Eye of the Needle 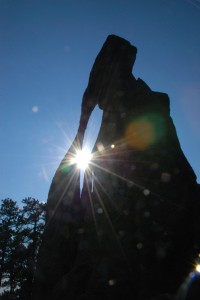 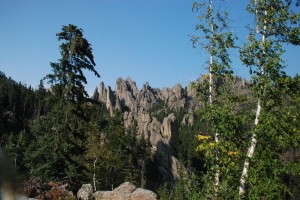 are made from granite, an igneous rock formed underground from magma, which pushed up from within the earth.  Over millions of years, the softer sediments on top of them was eroded away leaving the spectacular spires we had a chance to enjoy today. 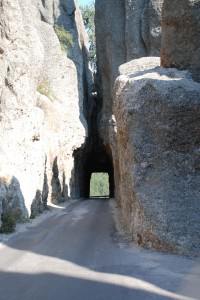 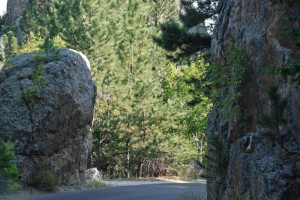 was carved into the side of the mountain and boasted a number of hairpin turns.

On a sad note, there are vast areas of brown [dead] trees.  These trees are dying or have died as the result of an invasion of mountain pine beetles which feed under the bark in the spring when the trees are trying to transport nutrients. 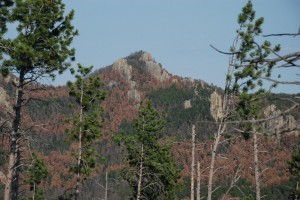 This evening, we returned to Crazy Horse to see their light and laser show, projected on the side of the monument and accompanies by music and a commentary.

Crazy Horse lit up at night 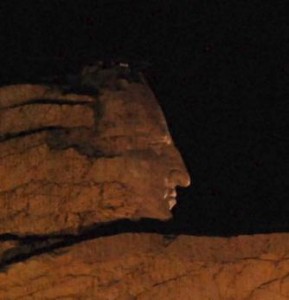 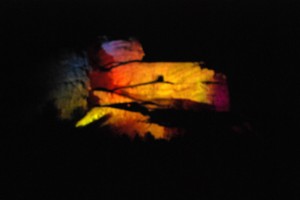 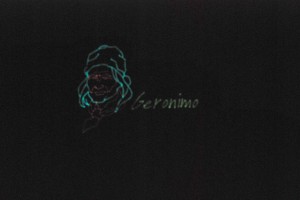 A laser view of the shape of the final monument 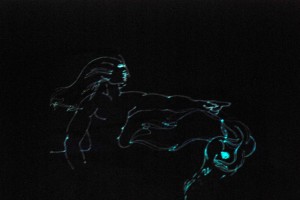