Today was truly special.  We visited with a retired Navy Captain, Eugene “Red” McDaniel, with whom I served aboard the USS Independence (CVA-62) 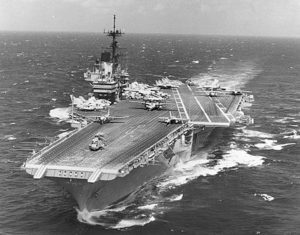 more than fifty-one years ago and his wife Dorothy. 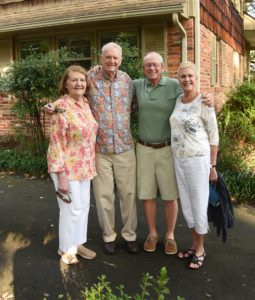 After being transferred from the ship, Red went to VA-35, a naval attach squadron which flew A-6 Intruder aircraft,

which the Independence carried during its 1965 Vietnam cruise.

On 19 May 1967, after 80 missions, on a day he was not scheduled to fly and just four days before he was to be relocated back to the United States, then Lt. Cmdr. Eugene "Red" McDaniel, pilot, and Lt. James "Kelly" Patterson, bombardier/navigator, launched from the deck for the USS Enterprise in an A6A, call sign "Raygun 502."

They were on a deep strike mission to attack a NVA truck repair facility located in the Van Dien District of down town Hanoi, North Vietnam.  This area was commonly referred to by US pilots as "Little Detroit." The weather conditions included scattered clouds and visibility of 10 miles.

As the Intruder flew deep over enemy held territory, it was struck by a surface-to-air missile (SAM) forcing Lt. Cmdr. McDaniel and Lt. Patterson to eject.  Both men landed roughly a mile apart in a U-shaped valley containing villages and numerous truck-passable roads, and nearly a mile from the wreckage of their aircraft.   A short time later, squadron mates Nick Carpenter and Richard Slaasted crossed over the burning wreckage and had no difficulty in visually locating the downed crew in an area approximately 30 miles southwest of Hanoi and 11 miles southeast of Hao Binh, Hao Binh Province, North Vietnam.

Both men immediately established radio contact with the crew of another Intruder reporting they were injured – Red McDaniel damaged his back upon landing and Kelly Patterson had sustained a badly broken left leg.

Lt. Cmdr. McDaniel was captured early the morning of 20 May and was transported by his captors to Hanoi where he spent time in five different camps including the infamous “Hanoi Hilton”.

Red was listed as "missing in action" until 1970, during which time Dorothy did not know whether he was alive or dead, when the Hanoi government acknowledged that he was being held prisoner.

A POW for more than six years, McDaniel was released 4 March 1973, after the Vietnam cease-fire. 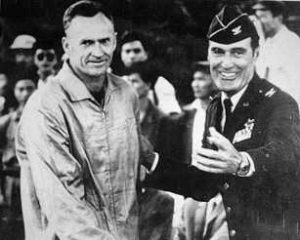 Red McDaniel was one of the most brutally tortured prisoners of the Vietnam War.  This torture resulted from his active role in camp communications during an organized escape attempt by his fellow prisoners.  He is the author of “Scars and Stripes”, a book telling about his six years in a communist prison.

The morning after the shoot-down, the same Intruder aircrew who first located the burning wreckage and both Red McDaniel and Kelly Patterson alive on the ground, again found Lt. Patterson without difficulty.  They not only spoke with him over his survival radio, but they saw him alive and free. On the morning of the third day, Nick Carpenter returned to the area of loss in the backseat of an Air Force F4 to pinpoint the downed bombardier/navigator's position for Air Force rescue personnel, and again, they found Kelly Patterson in the same location.  And, as in previous flights, they were able to see him and talk with him before dropping a Fulton Extraction kit for him to use during a planned extraction.  That night and before dawn two other F4 aircrews located him.

Unfortunately, they learned during that radio contact that the Vietnamese captured the extraction equipment before Lt. Patterson could reach it. During the day of 22 May – his fourth day on the ground deep in enemy territory – all efforts to locate Kelly Patterson by Navy and Air Force personnel proved fruitless.  All rescue efforts were terminated at that time based on the firm belief he had been captured, and accordingly, James Kelly Patterson was listed as a Prisoner of War.

While a Prisoner of War, Red McDaniel was told in 1967 by a prison guard, known as Onizz, that his bombardier/navigator had recovered from his injury and was well. Other POWs who returned during Operation Homecoming saw evidence that Lt. Patterson was also a prisoner of the North Vietnamese. Dewey Smith saw an interrogation questionnaire with Kelly Patterson's name written on the top of it in the fall of 1967 and Ronald Mastin believes he saw a photo of Kelly Patterson's ID card in a Vietnamese newspaper during the same year. Further, Bobby Jo Keesee reported seeing Kelly Patterson's name scratched into a cell wall in a prison camp near the Chinese border known to the POWs as "Briarpatch."

Tragically, for Lt. Kelly Patterson, and other Americans who remain unaccounted for in Southeast Asia, their fate remains a mystery.

He later served as Director of Navy/Marine Corps Liaison to the U.S. House of Representatives from 1979 to 1981.  In this capacity, Captain McDaniel worked daily with Congress on national defense planning and provided legislators with information vital to the strategic development of Navy forces throughout the world.  Red retired from the Navy in 1982.

Well into his retirement, Red’s continued advocacy for a full and honest accounting of all of our country’s MIAs, and that of Kelly Peterson, in particular, remain a life’s mission for him … and should be lauded and supported by all Americans!

Meanwhile, during those six years which were so suddenly taken was away from Red and his wife, Dorothy chronicled her life which was later published, “After the Hero’s Welcome”.

Today, Red has one of the most incredibly positive attitudes about life of anyone Debbie or I have ever met!  Anecdotally, almost in parallel with our visit with Red and Dorothy, I have reconnected with other Independence officers, or their families, with whom I have served and who mentored me when I reported aboard for my first duty assignment as a newly minted Ensign.