We’d planned to break the trip between Little Rock and Nashville into two days … but as we made such good time this morning and I was feeling good at the wheel, we pushed on for our longest day of the trip to the Two Rivers Campground in Nashville. 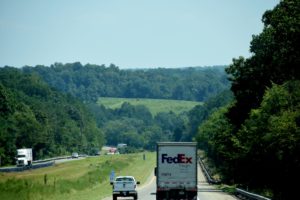 with only occasional glimpses of a few [seemingly, mostly hay] farms. 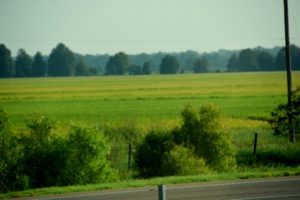 Reaching the city limits of Nashville, our Garmin GPS apparently decided that after having little or no “creative” work over the past week on our relatively uninteresting drive from Gallup, NM, to have some fun with us!  Rather than keeping us on I-4o to TN-155 and a short, but direct trip to our destination campground, we were routed over several area Interstates, through some “interesting” construction zones 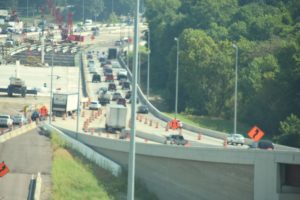 and at one point, down an exit ramp, under the road we’d been on, up the ramp back onto the road, down the next exit ramp and under the same bridge again before finally wending its way finally to Route 155.

Tired, we got hooked up, drank wine, had dinner and went up to the campground office to listen to a very enjoyable C&W group.