A relatively short trip from Sallisaw, OK to the 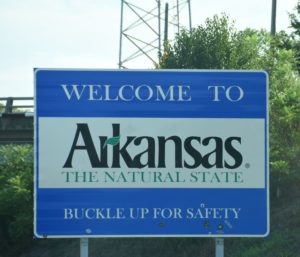 line and then a couple of hours further to our destination in North Little Rock.

We began to wonder about the pronunciation of the state’s name, specifically as two state names, Arkansas and Kansas, share all but two letters in the exactly the same order. So why do we pronounce them differently?

The French, however, left their mark on Arkansas' pronunciation. French explorers learned of a sect of the Quapaw, a Native American tribe in the territory now known as Arkansas, from the Algonquians, who called the people akansa (most likely related to the Kansa tribe).  Various French documents and books spelled the state's name various ways — Arkancas, Akansa, Arkanceas. But "it is absolutely certain that the name as pronounced by the Indians was the same as if pronounced in our language Arkansaw,"

During the early days of statehood, Arkansas' two U.S. Senators were divided on the spelling and pronunciation. One was always introduced as the senator from "ARkanSAW" and the other as the senator from "Ar-KANSAS." In 1881, the state's General Assembly passed a resolution declaring that the state's name should be spelled "Arkansas" but pronounced "Arkansaw."   The pronunciation preserves the memory of the Indians who were the original inhabitants of our state, while the spelling clearly dictates the nationality of the French adventurers who first explored this area.

For most of the journey, deciduous trees lined the Interstate limiting our ability to see much or anything else along the way.  The fact that struggling to see our motorhome’s reflection in the rear door of an 18-wheeler we were following 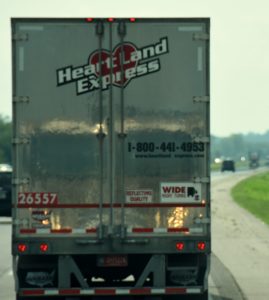 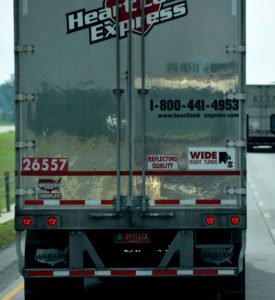 was one of our day’s highlights, reflects how little there was to see.