Today we had tickets for a 1:00 PM tour of Boeing’s (a company celebrating its 100th birthday this summer) production facilities just outside Mukilteo (Everett), Washington.  While our on-line and GPS checks suggested an hour and one-half to make the 90 mile trip.  Fortuitously, we left around 9:00 AM as we ran into a horrendous traffic jam on the I-5 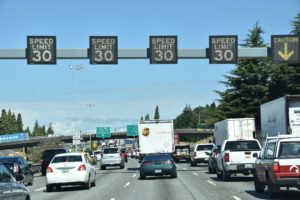 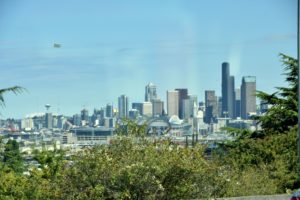 After well over a half-hour of stop-and-go traffic and several subsequent slowdowns, we finally reached the Boeing facility close to 11:30.

Our starting point was the Future of Flight Aviation, a 28,000 square foot aviation museum and education center, where photos are permitted. 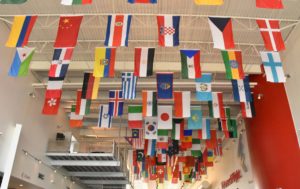 Flags of the nations which have purchased Boeing aircraft 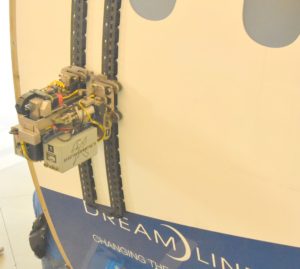 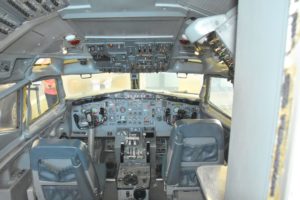 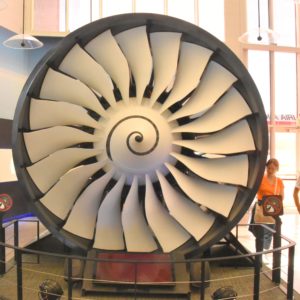 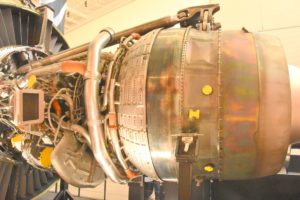 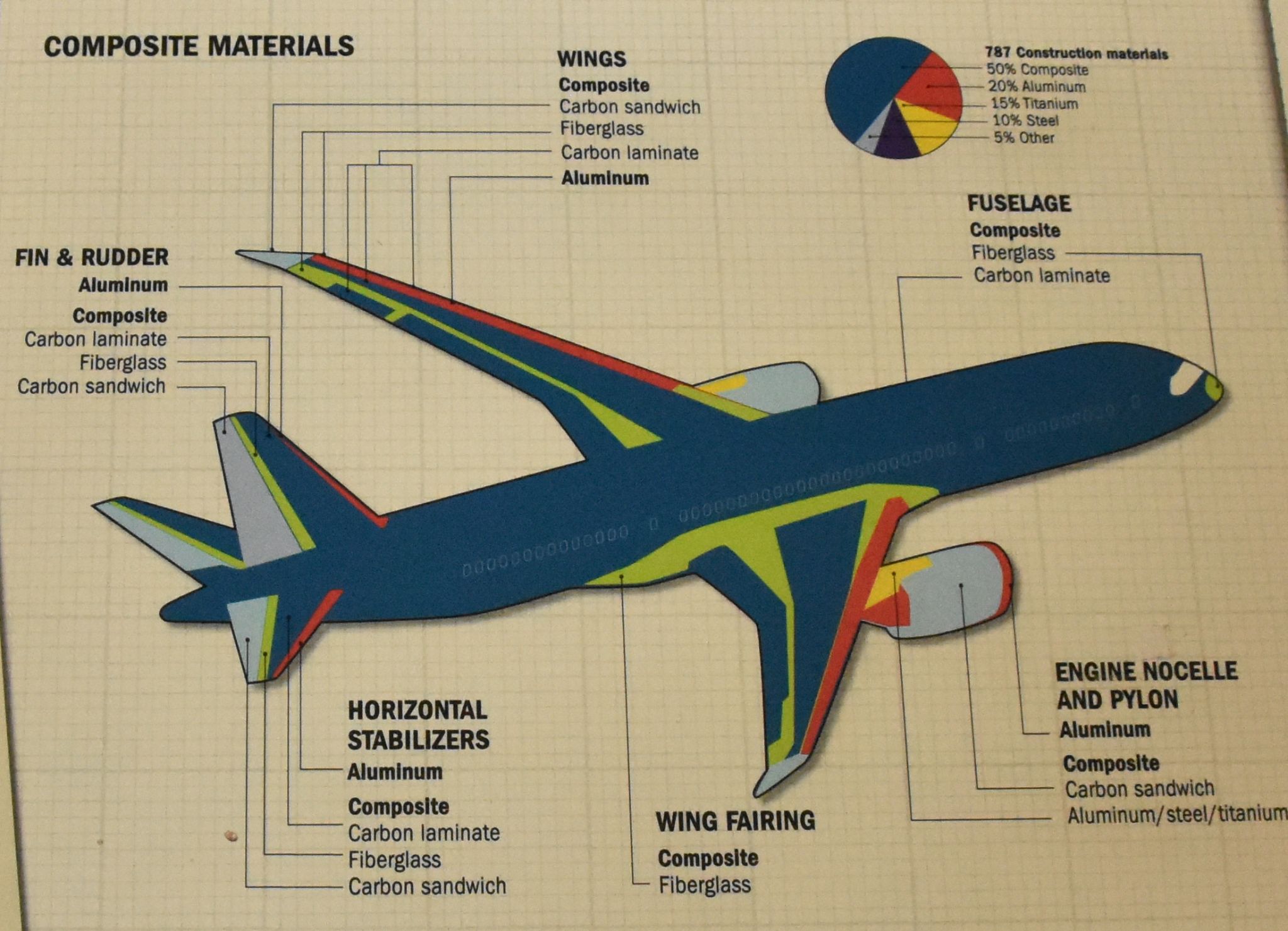 And why composites are used more and more

This aerial from the Internet gives some perspective of the overall facility, including Paine Field, the adjacent municipal airport jointly maintained and used by Boeing. 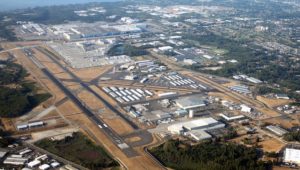 From a roof-top observation area at the Futures of Flight Aviation, we could view several of the manufacturing buildings 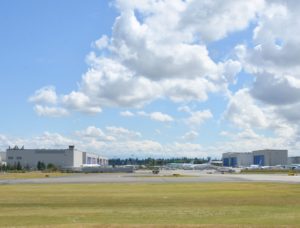 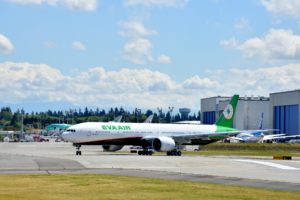 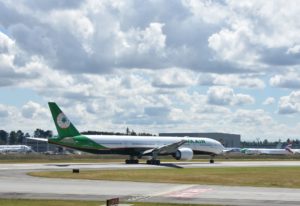 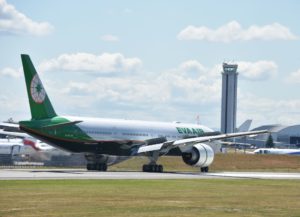 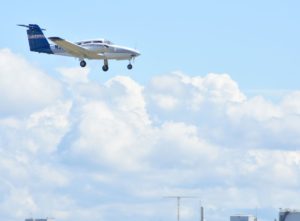 which can look dwarfed by the newly build Boeing commercial passenger, freight and tanker planes. 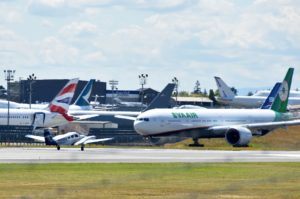 Before heading over to the Boeing Factory, we had to lock our cameras, pocket books and cell phones in a secure locker as none of those items are permitted within the factory premises … and they would have been confiscated if we’d been caught with them.  Therefore, the following photos were taken from the Internet … and those of the production lines are unfortunately very grainy. 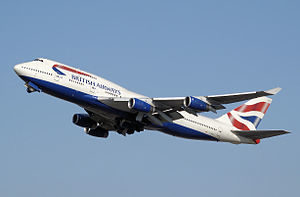 The 747-8I, the current passenger variant in production, is capable of carrying 467 passengers in a typical 3-class configuration, has a range of 9,200 miles and a cruising speed Mach 0.855 (570 mph). The Boeing 747 was one of the first wide-body aircraft to be produced and was the first jet to use a wide-body configuration for carrying passengers. Because of the vast size of the 747, the Boeing Everett Factory was designed and built to accommodate the assembly of these large planes as there was not enough room at the Boeing facilities in Seattle. Production of this aircraft began in 1967 and continues to this day.  Both passenger and cargo configurations are in production.  Prices for 747 aircraft start as a modest $240 million. 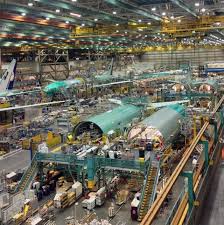 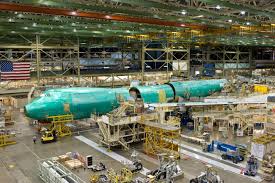 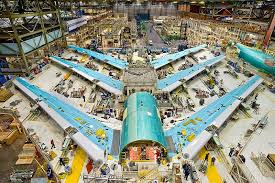 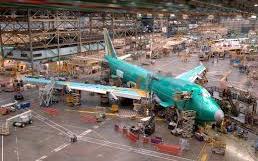 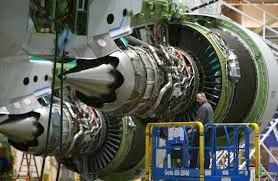 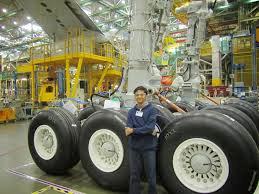 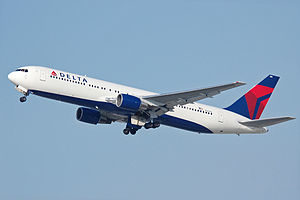 The Boeing 767 is a mid- to large-size, long-range wide-body twin-engine jet airliner. The, the current passenger variant in production, is capable of carrying 218, has a range of 6,890 miles and a cruising speed Mach 0.80 (530 mph). Production of this plane began in 1979. 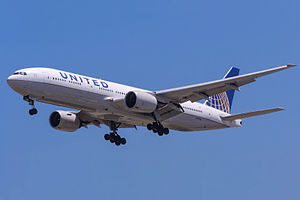 The Boeing 777 is a large-size, long-range wide-body twin-engine jet airliner. The current passenger variant in production is capable of carrying 386 passengers, has a range of (9,010 miles and a cruising speed Mach 0.84 (554 mph). Production of this plane began in 1993.  Both passenger and cargo configurations, as well as a tanker version made for the US Air Force are in production.  You can own one of these beauties for a mere $258 million. 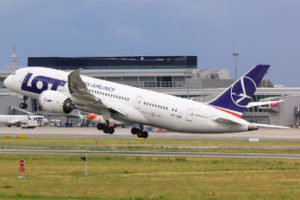 The Boeing 787 Dreamliner is a mid-size, long-range wide-body twin-engine jet airliner. The current passenger variants in production, are capable of carrying 242–290 passengers, have a range of 8,464 – 8,786 miles and a cruising speed of Mach 0.85 (562 mph).  The raked wingtips of the Boeing 787, which has been successfully employed by waterfowl for many millennia is a design hallmark of this aircraft.  The use of composite structures has made the three-dimensional shaping of wingtips much easier, and the first airplanes to use increased sweep at the wingtip were indeed composite gliders.  Production of this plane began in 2006.  Boeing is currently producing 40 Dreamliner aircraft each month.  Dreamliners are a steal starting at $325 million. 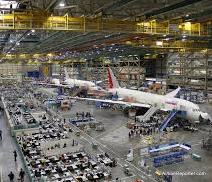 Without actually touring the plant, it is impossible to describe its enormity. 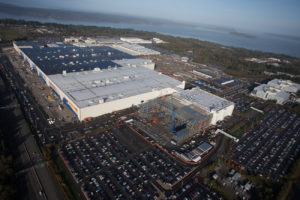 By means of some comparison, each factory door is the size of an NFL football field, and speaking of football – 75 NFL fields (or for you basketball fans, 911 NBA courts) could fit within the factory footprint. Remarkably, the Boeing factory was so capacious that it began generating its own weather systems. A then state-of-the-art circulation system had to be installed because clouds, the product of accumulated warm air and moisture, were forming inside. Then as now, there is no climate control system for temperature. In the winter machinery, body heat and residual heat from lights keep it warm; while in the summer, the doors are opened to cool the building.  Today, some 30,000 employees work at the facility in three shifts 5-days a week.

Heading back to Olympia, we opted to take an alternative route, I-405, under the assumption that it couldn’t be any worse than our trip to Boeing.  The first ten miles of that trip were a breeze.  Then things went “south” in a hurry.  Over the next 50 minutes we managed to make just shy of 5 miles!  For the next hour the traffic would pick up speed and then we’d find ourselves at a dead stop.  Nearly three and one-half hours after leaving the Boeing factory we finally arrived back at our campground.

On the corner of the street on which our campground is located was a sign which reminded us that Washington is one of just a few states in which recreational marijuana is legal. 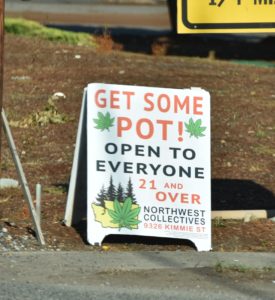 However, in my case the only pot I have is the result of eating too many desserts!

Back at our campsite the sun’s late afternoon rays suddenly drew our eyes to a patch of green holly leaves framing several red ones. 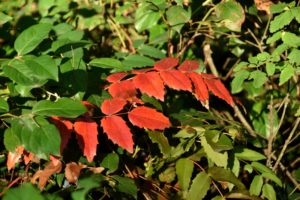 This entry was posted in Boeing 747, 777 and 787 Manufacturing Plant. Bookmark the permalink.