After a good night’s sleep and a complementary waffle breakfast at our campground, we unhitched our utilities, pulled in our slides, raised our leveling jacks and got ready to head out. No sooner did I put our RV in drive than our jack warning light and alarm, together with all of the lights on the jack panel all went off!

After several minutes of head scratching, we decided to leave, as we knew the jacks were in the retracted position. Fortunately, the light show and accompanying alarm serenade ceased almost immediately.

Shortly after leaving our campground, we passed our 60,000 mile mark of RVing.

Continuing our trek south along I-95 became a pretty boring trip as anyone who has driven the route through southern Virginia, North Carolina and South Carolina can attest.

The most exciting events, if you could term them as such, were the army of police cruisers who had stopped several dozen motorists in their web of speed traps. 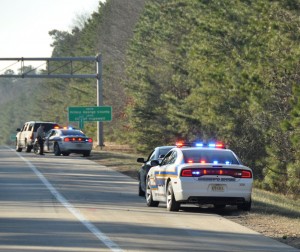 As our motorhome averages a paltry 7 miles per gallon, we were elated to see ever lower gas prices as we made our way down the East Coast. 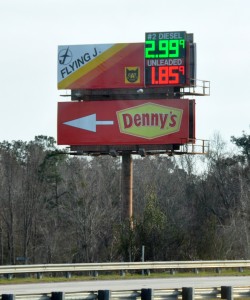 We ended up filling up at an almost unheard of price of just $1.829 per gallon!

With little traffic and good roads, we made excellent time and around noon decided to push on from our planned stop just north of Fayetteville, NC , effectively doubling our day’s mileage, arriving in Walterboro, SC around 4:30.

After settling in to our site 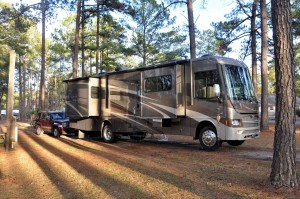 we took a walk, which felt great after two days of sitting for the better part of eight hours.

As the nighttime temperatures before we left home and again last evening in Virginia were well below freezing, we had not put any water in aboard. However, tonight was different with the lows expected to run above 40 degrees we filled our fresh water tank.

Shortly thereafter, we accidentally discovered a wet area on our bedroom rug. We finally traced the source to the hot and cold water faucets running to our washing machine which were wide open. Once closed, we started to clean up the wet area. For some reason, I opened the door of our front-load machine and was greeted by a torrent of cold water soaking me and a now greatly expanded the areas of carpet. Apparently the person we had de-winterize our motorhome had forgotten to close those two faucets along with failing to reinstall the water filter under the kitchen sink.

The next couple of hours were spent sopping up the water with towels and a mini-shop vac we carry aboard. 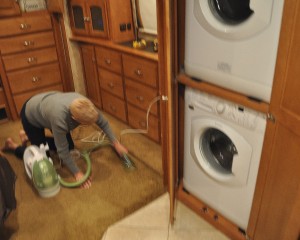 Oh yes, then there is the matter of our hot water heater … which is not working on either its propane or electric modes.

While not yet a “trip from hell”, we both hope we’re at the end of these unforeseen surprises.

While it’s been a frustrating start to our trip, tomorrow is another … and hopefully less challenging … day!