Yesterday, after listening to the weather forecast, Debbie suggested we take a one-day road trip to Delaware to visit and tour the state capitol in Dover.

The current state house, formerly called the Legislative Hall, is a Georgian Revival structure of handmade brick with an 18th century style interior. 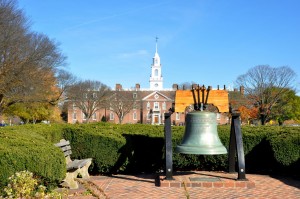 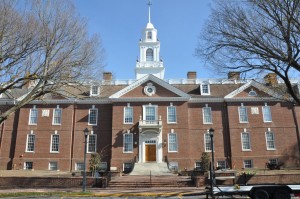 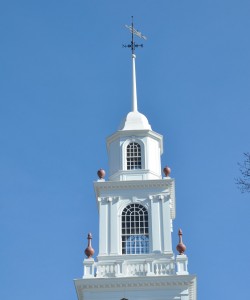 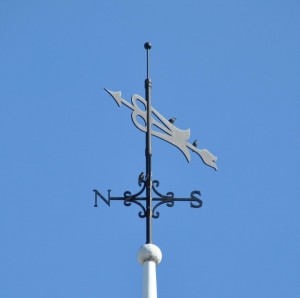 Construction began in 1931 and the building was dedicated in 1933. The building was expanded by the addition of north and south wings from 1965 to 1970 to provide legislative offices. Two more wings were added onto the east side in 1994. 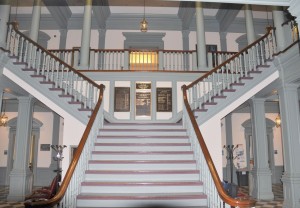 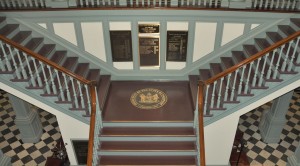 The state seal adorns the floor of the staircase landing

It provides the formal chambers for the State Senate (21 seats) 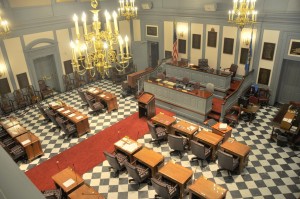 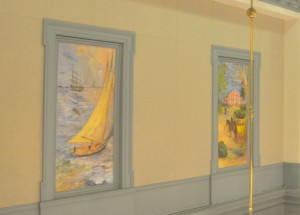 and House or Representatives (41 seats) 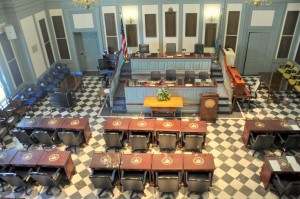 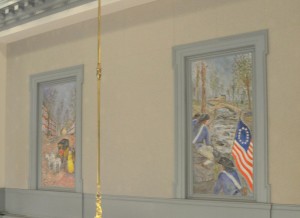 the General Assembly’s two nonpartisan staff agencies, the Division of Research and the Office of the Controller General, as well as formal offices for the Governor 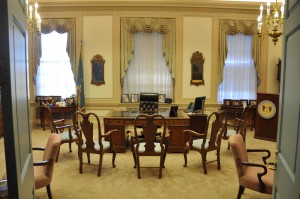 Unlike many other state capitols we’ve visited, Delaware’s Legislative Hall has no interior dome and is only two floors in height.

From there we walked a short distance to the First State Heritage Park, Delaware’s first urban “park without boundaries” linking historic and cultural sites in the city that has been the seat of state government since 1777.

Around The Green, a historical park the State House, laid out in 1717 in accordance with William Penn’s 1683 orders. Among the mostly Georgian-styled buildings, 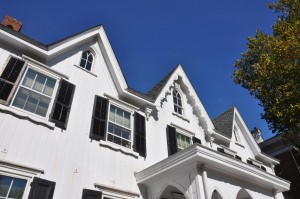 most dating from the 18th and 19th centuries are: 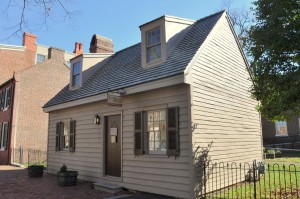 It is believed that in 1861 President Lincoln met the John Bell House with influential politicians to discuss a bill he wanted to introduce in Congress that would compensate District slave-holders an average of $300 for each slave in hopes it might avert the Civil War. 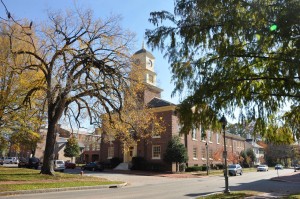 From 1724 the building was known as the King Georges Inn. On its sign was painted a portrait of King George. During the Revolution, the king’s picture was replaced with that of George Washington. 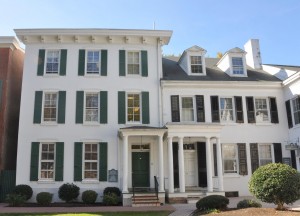 The site of the Poison Candy Murder … American’s first murder-by-mail.
In 1891 Mary Elizabeth Pennington and John P. Dunning had been married at Meeting House Square in Dover, Delaware. Soon thereafter, the couple moved to San Francisco for employment opportunities.  In 1896, Mary returned to Dover with her young daughter in an attempt to escape marital difficulties.  Two years passed without serious incident.  Then in August of 1898, quite without warning, she received a nondescript and pleasantly wrapped box in the mail.  After sharing the chocolate candies found inside with friends and family, she and several others fell violently ill.  The treacherous event quickly caught the eye of Dover high society. It resulted in the deaths of both remaining children of former congressman and attorney-general John B. Pennington.
Grief stricken, the venerable Pennington employed all his energies in tracking down the perpetrator.  This was accomplished with remarkable speed, thanks primarily to the efforts of Delaware detective Bernard McVey who amassed an impressive amount of physical and circumstantial evidence in the weeks following the murders.  The case also carried with it national significance. As the evidence against San Francisco socialite Cordelia Botkin mounted, a major flaw in extradition laws of the time came to light. Jurisdiction laws proved quite inadequate to cope with serious crimes committed across state lines. Technically, for extradition of a suspect to be legally enforceable, the accused had to be a fugitive from justice from the state in which the crime had occurred.  The legal jargon of the time defined this as “constructively present” (i.e. physically present) at the scene of the crime.  In this case of course, the method of murder originated from not only a different state but from the opposite side of the country.
Consequently, Delaware prosecutors faced serious legal obstacles in the apprehension of Botkin. Fortunately there were laws on the books in California which allowed close cooperation between the two states. In December of 1898 this unprecedented case went to trial as “The State of California vs. Cordelia Botkin”. Ultimately, Cordelia was convicted and died in prison. 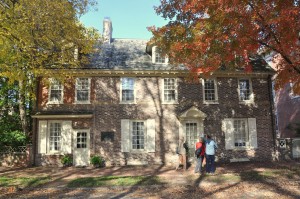 Built in 1728 but by Dr. Charles Greenbury Ridgley, a Colonial and State Legislative Assemblyman and delegate to the First State Constitutional convention. His son, Nicholas Ridgley was a member of the convention that ratified the Federal Constitution in 1787. 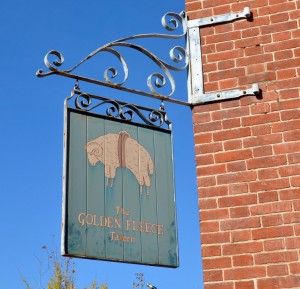 This was the site of the Golden Fleece Tavern, scene of some of the most important and dramatic events in Delaware history.  Built in the 1730s, the Golden Fleece was a center for community and government activities.  It was a place of great importance during the American Revolution and the early years of our Nation’s Independence. Also known as Battell’s Tavern, it hosted the meetings of the Committee of Inspection and Observation, and was a vital point for the exchange of wartime communications. With the transfer of state government from New Castle to Dover in 1777, the Golden Fleece became the meeting place of the Assembly’s Upper House, the Legislative Council.
It was the home of that body until a State House was completed in 1791.  In September 1787, a new framework for our Nation’s government was sent to the states for consideration.  Thirty delegates were elected to meet and review the document.  The meeting was convened here on December 3.  Approval was unanimous, and on December 7, 1787, Delaware became the first state to ratify the Federal Constitution.
A fitting climax to its role as Delaware’s “Capitol Tavern” occurred in January 1790, when the Council met to approve the Bill of Rights. 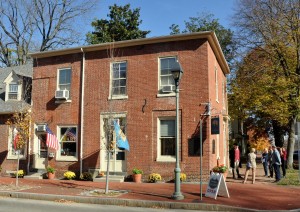 The Golden Fleece was demolished circa 1830, and replaced by the Capitol Hotel. The hotel was closed in the 1920s, and renovated to its present appearance by Henry and Mabel Lloyd Ridgely. 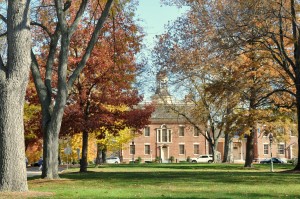 The Old State House was the first permanent capitol building in Dover, Delaware. Begun in 1787 and completed by May 1791, this Georgian-style structure was originally home to both state and Kent County governments. Over the course of 140 years of continuous governmental use, number of structural and stylistic changes radically altered its original 18th century appearance, including painting the exterior bricks gray and Victorian-style remodeling in 1873. The Old State House was restored to its original appearance as part of Delaware’s bicentennial celebration in 1976. 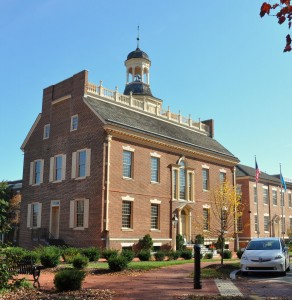 The first floor features the 18th century court room for both the State and Kent County. 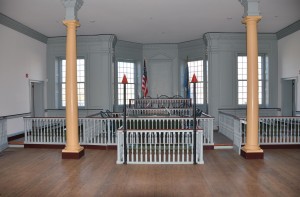 The grand, dual stairways, known as a geometrical staircase served as a portal of entry to the legislative chambers on the second floor. 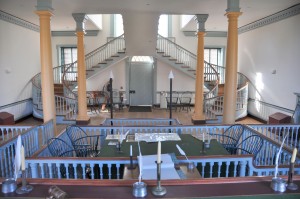 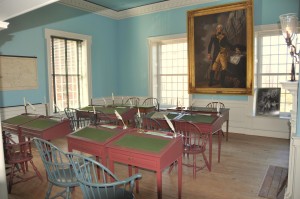 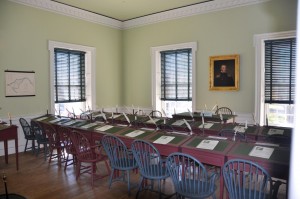 Under the window on the far right a porch once stood … from which the Declaration of Independence was first read to the citizens of Delaware. 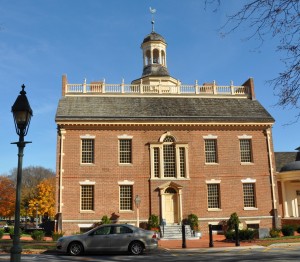 We also stopped at the State Archives where the featured exhibit was celebrating Delaware’s crucial role as a stop on the Underground Railroad. 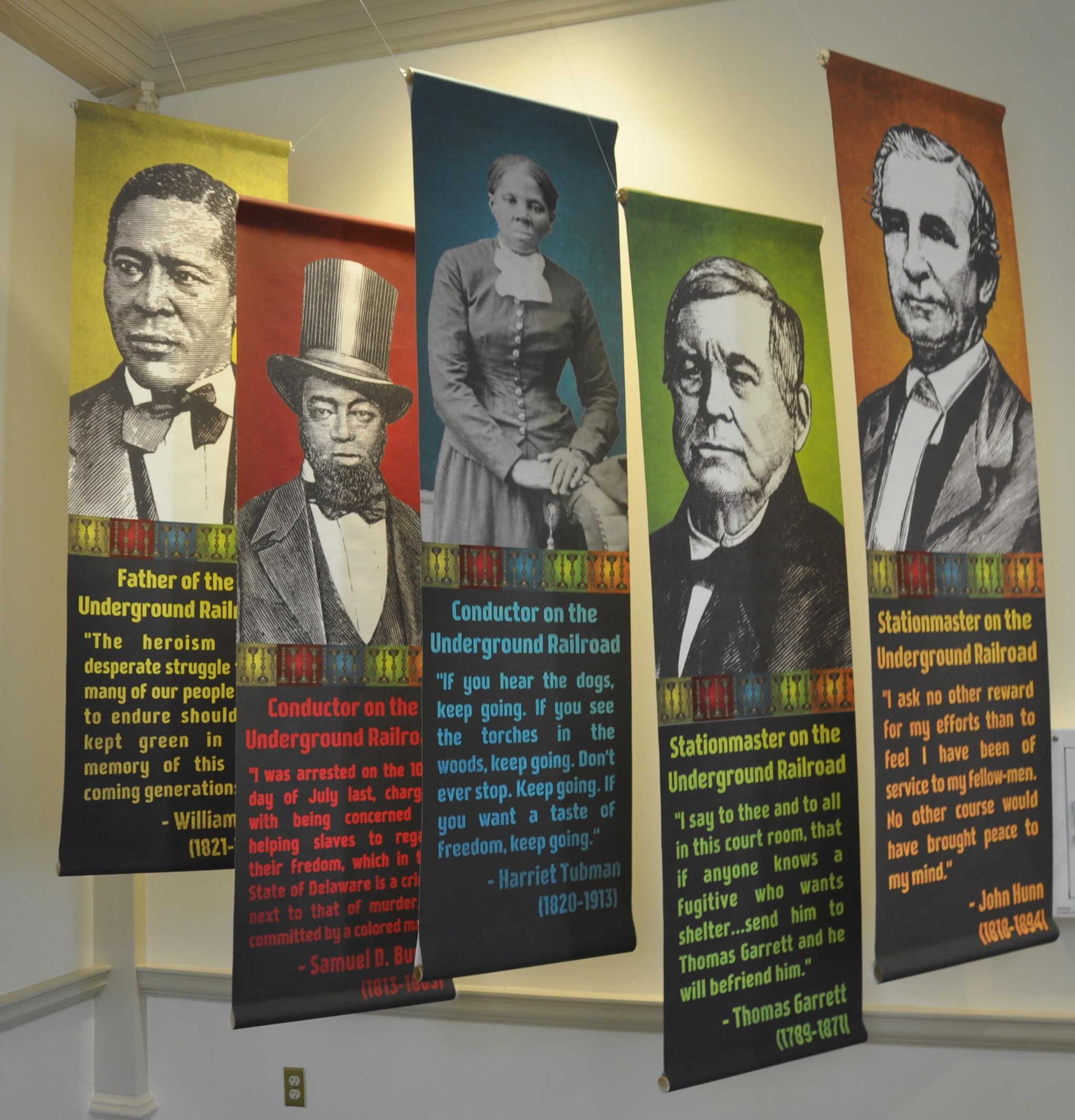 A short walk from there, we saw Woodburn, built in 1798, it has been the home of Delaware’s governors since 1965. Unfortunately, it was closed today so we were unable to tour it. 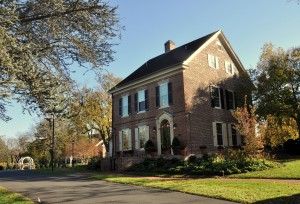 Next door is Hall House, which serves as the Governor’s guest house. 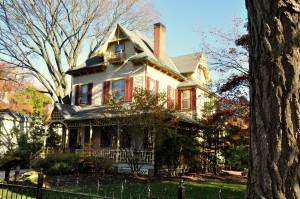 Across the street stands the Governor’s Tavern (mostly a coffee house on the first floor and offices on the upper floors). 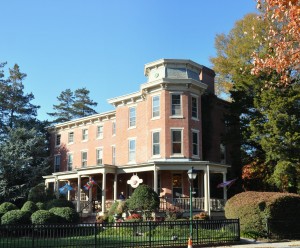 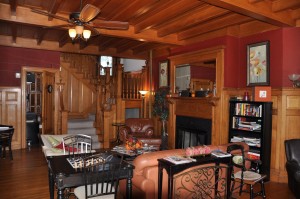 This entry was posted in Delaware State Capitol, Dover DE. Bookmark the permalink.