While visiting our daughter and family in New Hampshire, we decided to take a trip to Concord to visit the State House. While I had been a consultant to a former Governor of New Hampshire and, therefore, spent a fair amount of time in the capitol, Debbie had never been there despite our living just 30 miles away for 18 years. 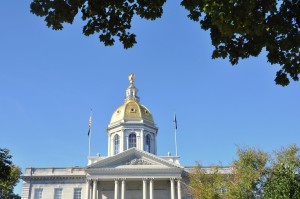 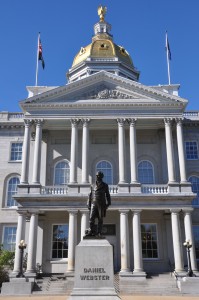 The original dome was silo-like perched on the top of the state house. In 1864, the dome was enlarged to a “Yankee” version of the 17th century dome atop the church of the Hotel des Invalides in Paris. The dome was gilded in 1940. Its base material under the dome is copper. The 23 ½ carat gold leaf is 350-thousnats of an inch thick and hand-applied in 3 3/8” squares 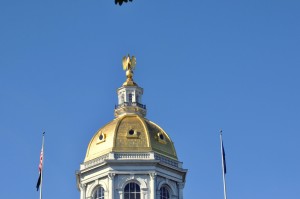 The original eagle, carved in 1818 and which remained atop the building for 138 years, was made of butternut wood with its wings and head hinged with wooden pegs.  It stands 115’6” above the ground, is 6’6” tall, has a 4’4” wing-span and weighed 600 lbs.  The original eagle was replaced in 1957 by a copper replica that weighs 250 pounds, including lightning rods connected to grounding wires.  Its height and wingspan are the same as the original, which is now located in the main lobby of the New Hampshire Historical Society. 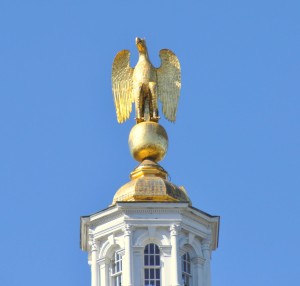 The copper eagle — also gilded with gold leaf — is 150 feet above the city of Concord with its head turned to the right to symbolize peace.

The main entrance opens into the Doric Hall (renamed the Hall of Flags). The hall is designed after Charles Bulfinch’s design for the Massachusetts State House. The hall features 107 battle flags for New Hampshire representing the Civil War, Spanish-American War, World War I, World War II, and the Vietnam War. 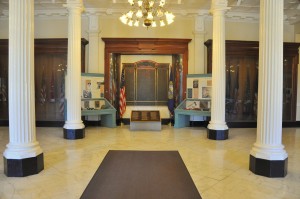 It is also one of the few State Houses without an internal Rotunda.

The New Hampshire State House is the home of the oldest continuously used legislative chambers in America. It’s 400-member House of Representatives is also the nation’s largest (other than the U.S. house) and its members get paid the less than any other state legislators in the country … just $100 per year! 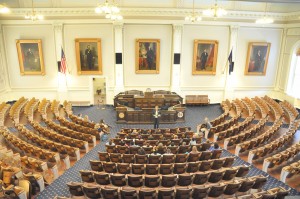 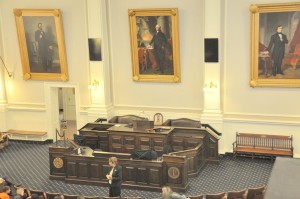 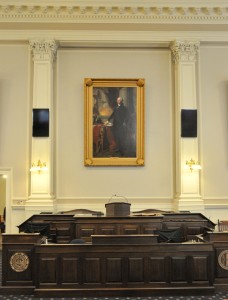 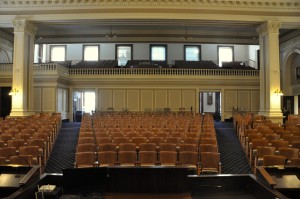 This body is unique in that every member of the Legislature must vote on every bill called to the floor. The failure to vote when called results in a member being summoned to the well of the floor and then required to publically cast his/her vote.

The State Senate, is relatively small, with only 24 members. It is presently located in the earliest chamber used by the State Supreme Court. 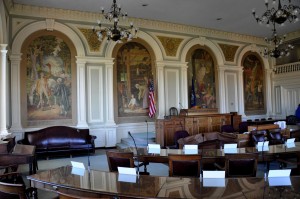 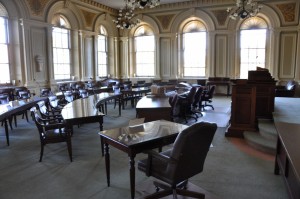 New Hampshire is also unique in that there is a 5-person Executive Council which must approve appointments of the governor and certain state contracts. 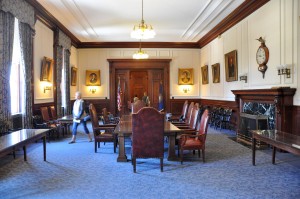 As with all State Houses, New Hampshire also honors its past governors with their official portraits being prominently displayed throughout the building. One such portrait is of Governor Hugh Gallen for whom I personally consulted during the early 1980s 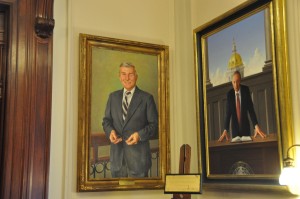 Governor Gallen on the left

The capitol grounds occupy 2.6 acres and, although enclosed by a granite fence, no gate impedes the flow of visitors, as this is “the people’s house”. Several statues are in the yard, including a replica of the Liberty Bell 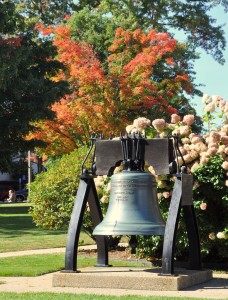 A granite memorial commentating the 76 Concord citizens who made the “ultimate sacrifice in World War II and the Korean War, 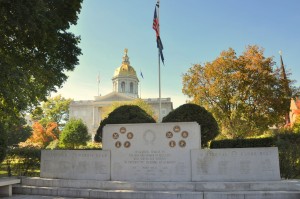 and larger-than-life statues of Daniel Webster, 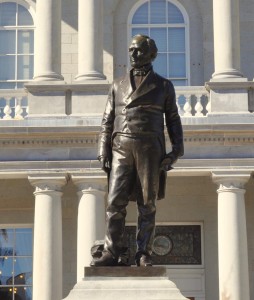 One of New Hampshire’s most famous statesmen, a defender of the Constitution, eloquent orator, U.S. Senator and U.S. Secretary of State for three presidents 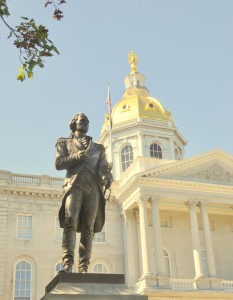 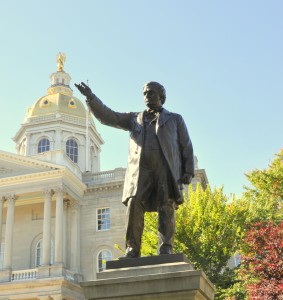 Hale is considered “the first U.S. Senator with an openly anti-slavery (or abolitionist) platform”. also opposed flogging and the spirit ration in the United States Navy, and secured its abolition in 1850. He served as counsel in 1851 in the trials that arose out of the forcible rescue of the fugitive slave Shadrach Minkins from the custody of the United States Marshal in Boston. Interestingly, Hale’s daughter Lucy Lambert Hale was betrothed in 1865 to John Wilkes Booth, Abraham Lincoln’s assassin. Booth had a picture of Lucy Hale with him when he was killed by pursuing Federal troops on April 26, 1865 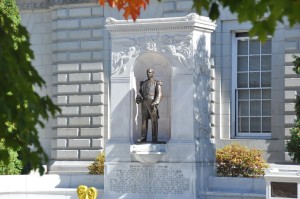 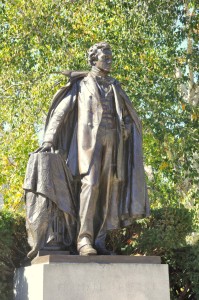 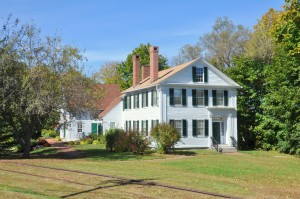 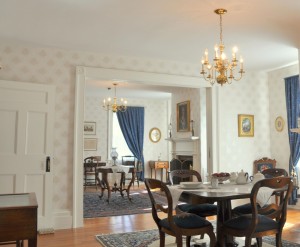 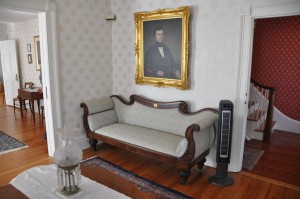 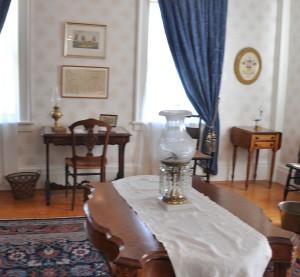 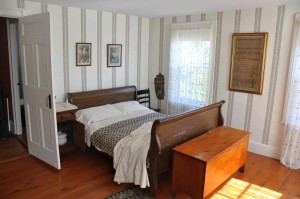 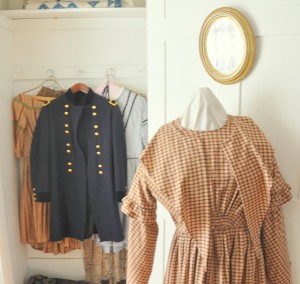 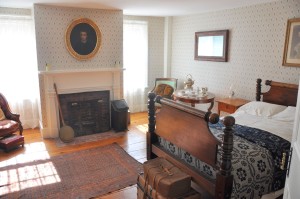 Often regarded as one of the three worst presidents, I was fascinated to learn about his otherwise successful career as a state legislator, youngest speaker of the New Hampshire House, U.S. Congressman, U.S. Senator, U.S. Army officer in the Mexican War … before being elected the 14th president of the United States.

Among his several significant accomplishments as president were;

While he opposed slavery, he was a Jeffersonian/Jacksonian Democrat who supported limited power to the federal government and a strict interpretation of the U.S. Constitution and state’s rights. Accordingly, as the Constitution in his time specifically permitted slavery, his blind loyalty to the Constitution took precedence over his moral objections to slavery.

After leaving his homestead, we traveled less than ¼ mile to Concord’s Old North Cemetery where Franklin Pierce, his wife Jane and two of his sons (Benjamin, “Benny”, killed in a train accident at age 13 and Franklin Robert who died of typhus at age four) are buried (a third son, Franklin, Jr., died three days after his birth in Washington, DC and the location of his grave remain unknown). 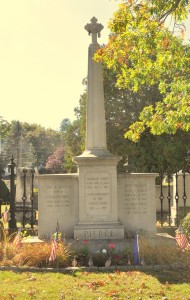