After some projects and laundry, Debbie noticed that the George W. Bush Presidential Library and Museum was in Dallas, just 26 miles away. 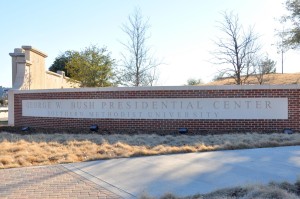 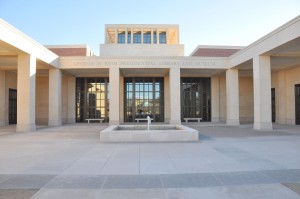 The George W. Bush Presidential Library and Museum tells the story of the United States during an extraordinary time in our national history.  Using actual artifacts, documents, photographs and videos, together with state-of-the-art interactive exhibits, the 14,000 square foot Museum covers George W. Bush’s life from his childhood in rural Texas to his post-presidency initiatives to improve childhood education and eradicate the scourge of HIV/AIDS and other diseases around the globe.

Comparing it to the other three presidential libraries & museums we’ve visited … there was a greater emphasis placed on the former president as an ordinary citizen and his post-presidency life, the full-size replica of his Oval Office was open and accessible, and most of the exhibits and displays were graphically easier to view and read.  At the same time, we also felt that there was too little information on his early life and there was a noticeable absence of any objective analysis of some of the most divisive issues and decisions of his Administration (i.e., the election of 2000, going to war in Iraq and the constitutionality of the Patriot Act).

By contrast, the criticisms, condemnations and conspiracies surrounding the Truman, Eisenhower and Johnson presidencies were openly presented in great detail in their respective Libraries & Museums.

That said, George W. Bush comes off as a truly decent man who loves his country and truly cares deeply about people, particularly those in uniform but whose presidency was victim of three events beyond his control … the terrorist attacks of 9/11, Hurricane Katrina and the financial meltdown of 2007-2008.

The first area you enter is a large, square room, several stories high.  Just below the upper windows, 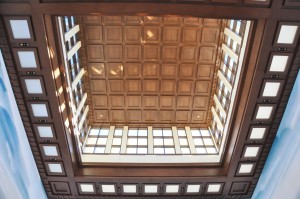 The first exhibit area is a dramatic “theater in the square” high above the floor and just below raised ceiling windows. 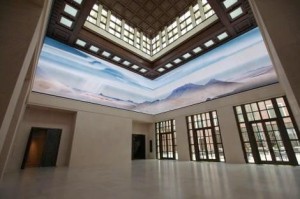 which then shows average Americans engaged in common, everyday activities … 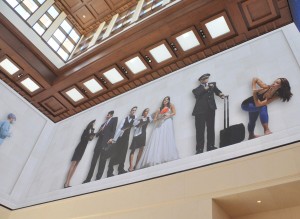 then showing hundreds of faces of people from across the country … 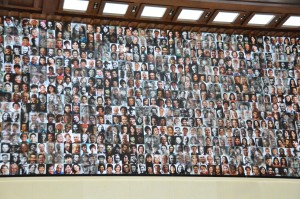 which are then reduced to the 43 men who have become president overlaid on a copy of the Constitution.

Meanwhile, around the entrance are six cases displaying some of the hundreds of gifts received by President and Laura Bush during his presidency, including; 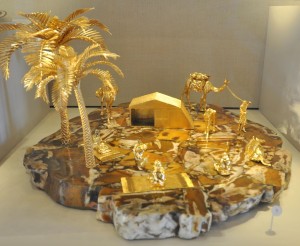 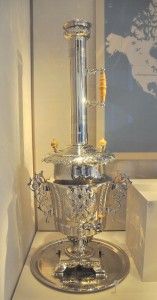 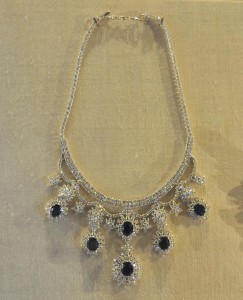 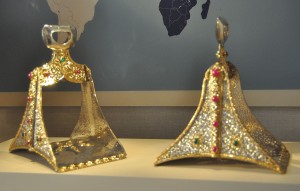 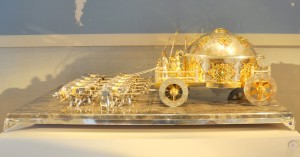 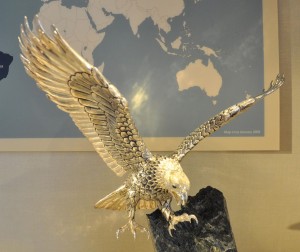 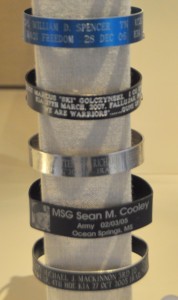 Memorial Bracelets from the families of captured and killed members of the U.S. Armed Forces 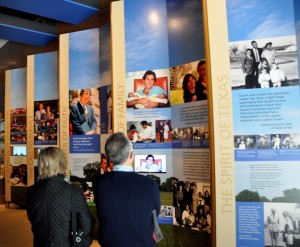 After playing the network broadcasts for election night 2000 and the subsequent announcements of the Supreme Court’s decision in Bush v Gore, the events of 9/11 and ensuing days and months become the focal points. 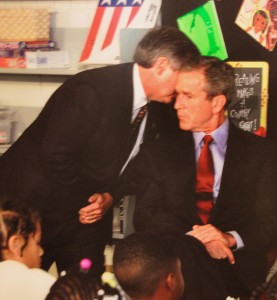 Six roughly two-minute videos cover the two plane hitting the World Trade Center, the plane attack on the Pentagon, the crash in Shenksville, PA and the collapses of the two Trade Center towers.

A summary of the War on Terror

Other aspects of his Administration’s tenure covered 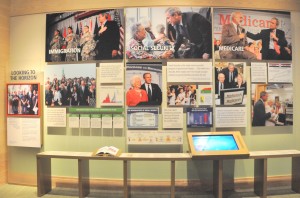 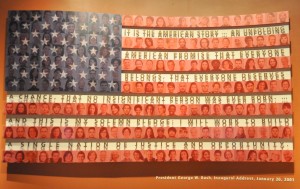 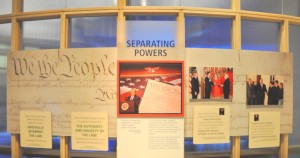 His views on the Separation of Powers

Commitments to Liberty and Freedom for All Peoples around the Globe 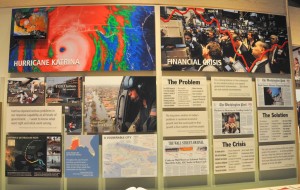 Katrina and the Financial Meltdown

There was also an interesting exhibit on Air Force One. 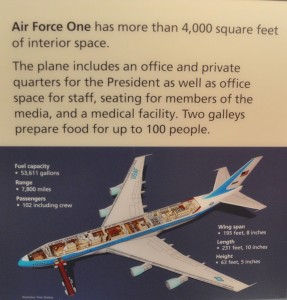 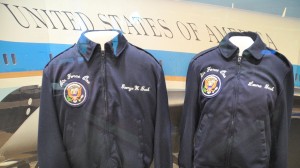 There were displays of the redecoration on the White House under the direction of Laura Bush, the China patters of the Bushes and gowns and tuxes worn by Laura and George. 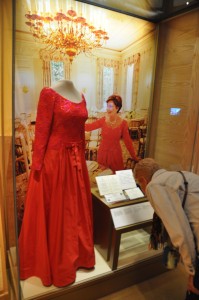 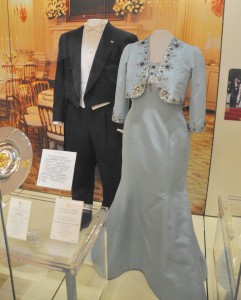 Attire worn by President and Mrs Bush for the May 7, 2007 State Dinner for Queen Elizabeth II and Prince Philip

The highlight was a full-size replica of the Oval Office decorated as it was during President Bush’s term in office. 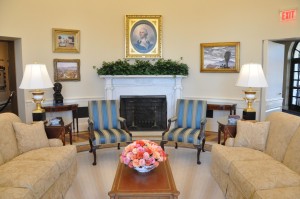 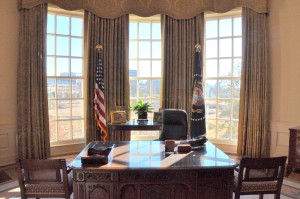 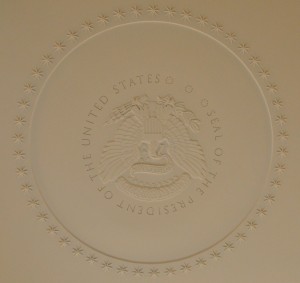 In the inner courtyard, were taller-than-life-size bronze statues of George W. Bush and his father, George H.W. Bush. 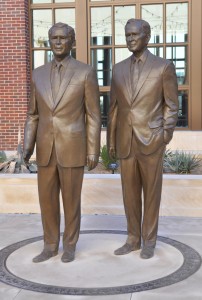 There are some unusual photos of five current and former living presidents taken at the dedication of the Library. 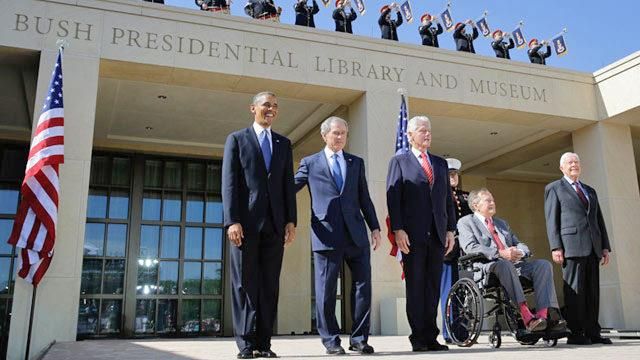 Oh yes … almost forgot … I had an opportunity to interview for a new job while there! 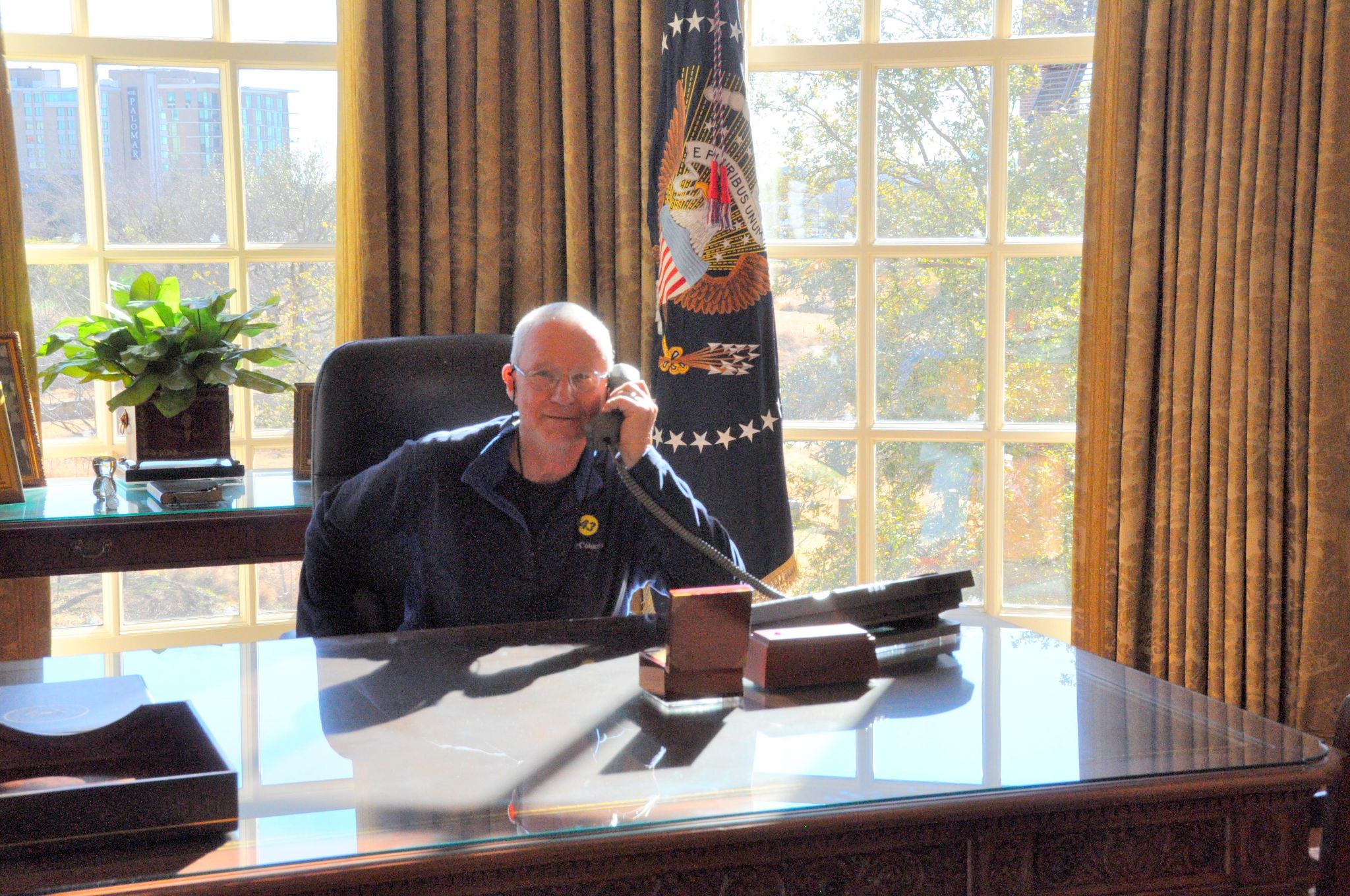