After a morning of doing little beyond reading in the shade and enjoying a pleasant breeze, we drove north to Utah (actually just a couple of miles away) to the Visitor’s Center in the metropolis of Big Water (population just a tad over 400).  There the National Park Service has its headquarters for the paleontological digs on the Grand Staircase Escalante Plateau. 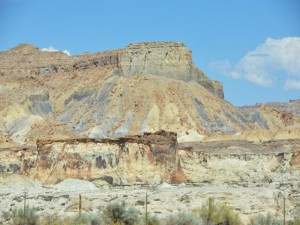 In conjunction, they have a small but incredibly interesting dinosaur museum where two of its resident paleontologists, including Dr. David Gillette, provided a wealth of information about the Age of the Dinosaurs which was his academic specialty. 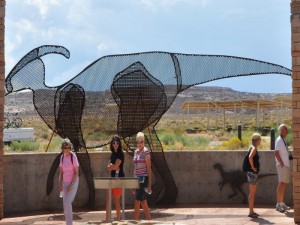 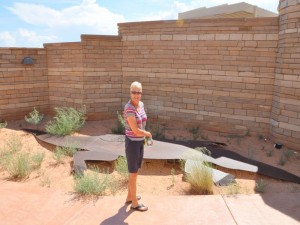 Debbie alongside the horizontal profile of a prehistoric alligator 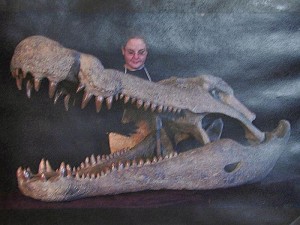 Fossil skull of an even larger relative of the above alligator 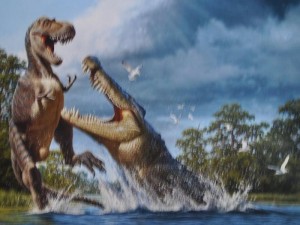 A rendering of the larger, 7-ton alligator attacking and about to subduing and devour g a 5-ton T-Rex 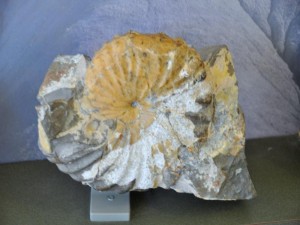 Ammonite – An ocean mollusk which lived some 94 million years ago 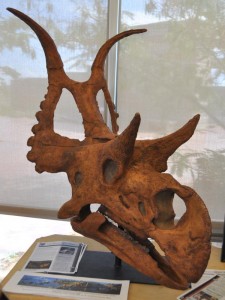 The 8 1million year-old Skull of Diabloceratops (an ancient herbivore ancestor of the better-know Triceratops. It ranged in height from 4’ to 5’; Ran 9’ to 10’ in length, lived in Mesozoic and Late Cretaceous Eras 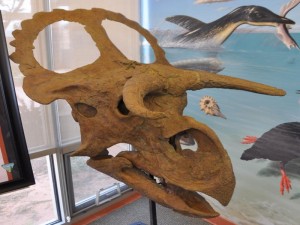 Masutoceratops, another forerunner of triceratops, approximately 6’ in height, 15’ long and weighing 2.5 tons 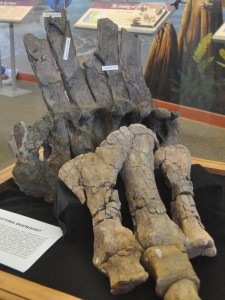 Fossil backbone and foot of a Hydrasaurus 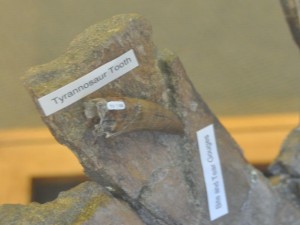 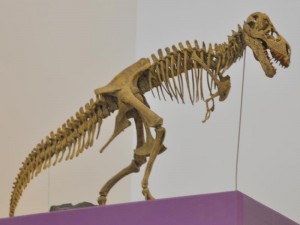 A few of the surprising facts we learned:

·        Much to our surprise, the Colorado River has not channeled its path through the rocks to create the Grand Canyon.  Rather, the canyon floor has remained at a relatively constant elevation while the Rocky Mountain plateaus around it have risen … at roughly the same rate as a human’s fingernails grow.

·         From the time a partial fossil is discovered, it may take 1-2 years to unearth the entire skeleton and another 4-5 years to clean, assemble and mount the fossil.

·         When a new species is unearthed, the person who discovered it does not get to name it.

·         On average on the Grand Staircase Escalante Plateau, roughly one new discovery is made each month.

On the way back to our campground, we stopped by Lone Rock, 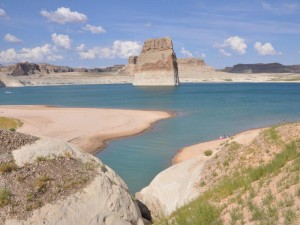 a rectangular monolith rising out of the northwestern end of Lake Powell.  After driving past many of the more than 100 RVs camped along the shore 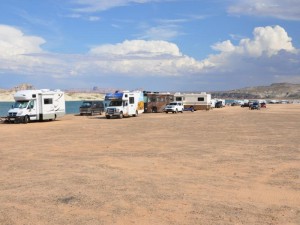 I decided to take whirl at four-wheeling in the soft sand.  It was a ball 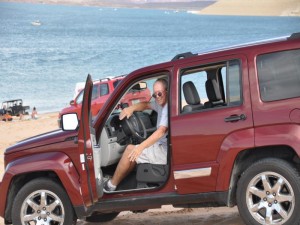 … until I hit a spot where my Jeep came to an inglorious halt. 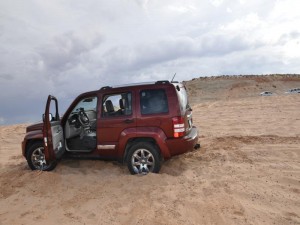 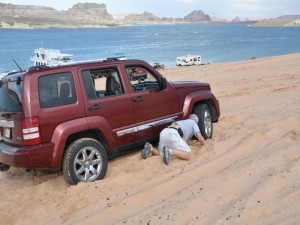 I finally managed to slip the transmission into 4-wheel-low and negotiated our way out of the sandy quagmire into which I’d mired our vehicle.