Debbie and I decided to do some limited sightseeing on our own today.  Our first stop was Glen Canyon Dam spanning the Colorado River,which we’d seen from the water the day before yesterday. 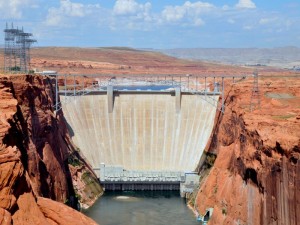 Although we did not take the tour down into the dam (we’ve taken similar tours at other dams in the past), we spent some time at the Visitor’s Center which had a number of excellent educational exhibits, including the Marble, one of four similar boats used to scout the Colorado River to identify locations for the several dams ultimately constructed. 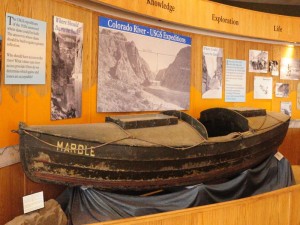 They also had several excellent movies showing on a rotating basis.

Glen Canyon Dam is a 710-foot-high concrete arch structure which has a crest length of 1,560 feet and contains 4,901,000 cubic yards of concrete.  Thickness of the dam at the crest is 25 feet, and the maximum base thickness is 300 feet. 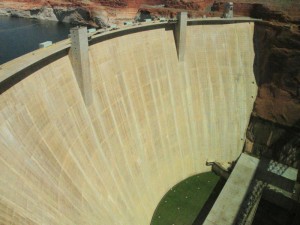 Total capacity for Lake Powell is 27 million acre-feet, and the active capacity is 20,876,000 acre-feet.  At normal water surface elevation (today, the lake’s surface is well in excess of 50’ below its capacity level), the reservoir has a length of 186 miles, approximately 2,000 miles of shoreline and a surface area of 161,390 acres. 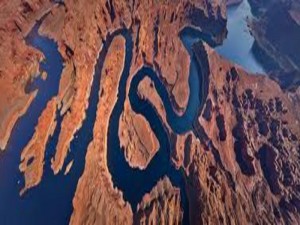 The power plant at the toe of the dam consists of four 118,750-kilowatt and four 136,562-kilowatt generators driven by eight turbines. Total nameplate generating capacity for the power plant is 1,021,248 kilowatts. Eight penstocks through the dam convey water to the turbines. Each penstock reduces in size from 15 to 14 feet in diameter.

Also fascinating was the Glenn Canyon Bridge which spans the Colorado River just below the dam. 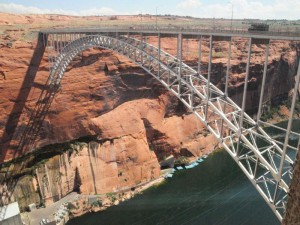 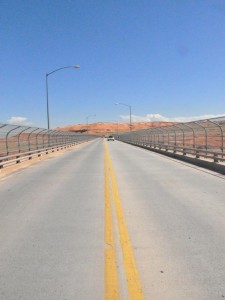 The 1,271’ long bridge stands 700’ above the water, has a span of 1,028’ and the vertical rise of its arch is 165. The anti-jumping fence along each of the walkways has several “windows” in the chain-ink just wide enough for a large camera lens to be poked through to capture pictures of the dam. 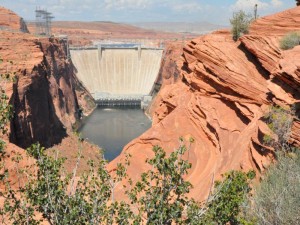 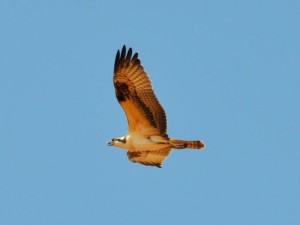 and a small lizard (whose tail very much resembles that of a gila monster but its head appears much different) watching us from just under one of the natural rock steps accessing the overlook. 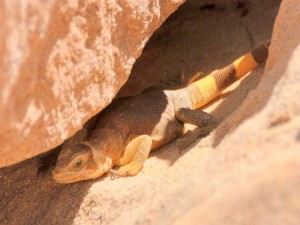 From there we traveled several miles further south on US-89 to reach the trail to Horseshoe Bend, 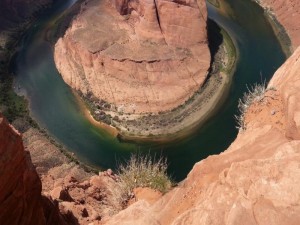 where we could stand on a 190 million year old petrified sand dune and view a 270o meandering bend in the Colorado River some 1,000’ below.  While some intrepid souls wandered right up to the edge of the vertical drop-off … I (with my aversion to heights) crawled just far enough to hold my camera in outstretched arms to (hopefully) capture the entire bend. 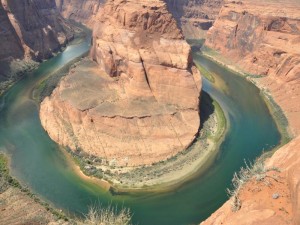 Along the trail back to our car, we noticed blooms on the sage 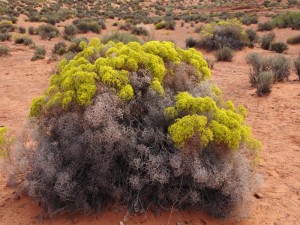 and enjoyed the antics of a Red-backed Whiptail 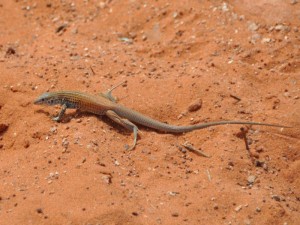 After a stop at the RVer’s favorite one-stop outlet. 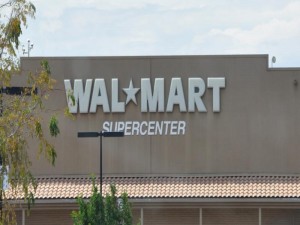 We headed back to our campground for the balance of the day.

Tonight we had a farewell dinner for Russ and Georgina who will be leaving us in the morning to head back to California.

This entry was posted in Glen Canyon Dam and Bridge, Page, AZ, Horseshoe Bend in the Colorado River, Page AZ. Bookmark the permalink.