Since childhood, we’ve heard of the Custer’s Last Stand and the Battle of the Little Big Horn which took place on June 25, 1876.  However, until today, neither of us ever paid much attention to the reasons the battle was fought, the battle itself, the casualties (other than the death of George Armstrong Custer) or the aftermath.  However, like so many other places we’ve been able to visit, history has “come alive” for us.

Abreast of the Visitor’s Center parking lot is the Custer National Cemetery, first preserved on January 29, 1879 to protect the graves of the 7th Cavalry troopers buried there … they had been initially buried in hastily dug graves in the days immediately after the battle but subsequently reinterred in the formal Cemetery.  Over the years, veterans of subsequent wars (Spanish-American, WWI, WWII, Korea, and Vietnam as well as native Americans) have also been interred in these hallowed grounds. 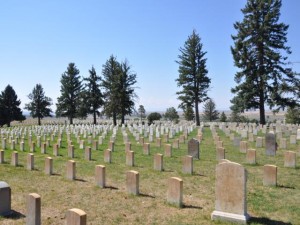 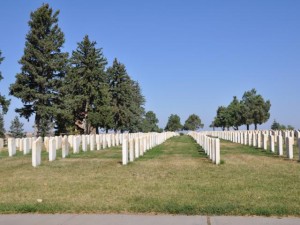 Some major participants subsequently had their remains reburied, including Lt. Col. Custer at West Point … and others who survived the battle Captain Frederick Benteen at Arlington National Cemetery and Major Marcos Reno who was a initially buried in a pauper’s grave in Washington, DC but his remains were reinterred with full military honors in the Custer National Cemetery.   Reno was the only participant of the Little Bighorn battle to be buried with such honors at the cemetery named for his former commander.

In late 1875, Sioux and Cheyenne Indians defiantly left their reservations, outraged over the continued intrusions of whites into their sacred lands in the Black Hills.  They gathered in Montana with the great warrior Sitting Bull to fight for their lands.  The following spring, two victories over the US Cavalry emboldened them to fight on in the summer of 1876.

To force the large Indian army back to the reservations, the Army dispatched three columns to attack in coordinated fashion, one of which contained Lt. Colonel George Custer and the Seventh Cavalry. 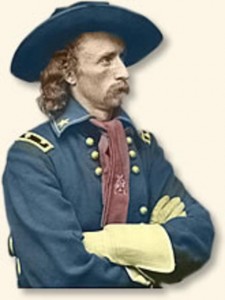 Spotting the Sioux village about fifteen miles away along the Rosebud River on June 25, Custer also found a nearby group of about forty warriors.  Ignoring orders to wait, he decided to attack before they could alert the main party.  He did not realize that the number of warriors in the village numbered three times his strength.  Dividing his forces in three, Custer sent troops under Captain Frederick Benteen to prevent their escape through the upper valley of the Little Bighorn River.   Major Marcus Reno was to pursue the group, cross the river, and charge the Indian village in a coordinated effort with the remaining troops under his command. He hoped to strike the Indian encampment at the northern and southern ends simultaneously, but made this decision without knowing what kind of terrain he would have to cross before making his assault.  He belatedly discovered that he would have to negotiate a maze of bluffs and ravines to attack.

Reno’s squadron of 175 soldiers attacked the southern end. Quickly finding themselves in a desperate battle with little hope of any relief, Reno halted his charging men before they could be trapped, fought for ten minutes in dismounted formation, and then withdrew into the timber and brush along the river.  When that position proved indefensible, they retreated uphill to the bluffs east of the river, pursued hotly by a mix of Cheyenne and Sioux. 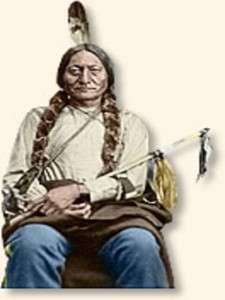 Just as they finished driving the soldiers out, the Indians found roughly 210 of Custer’s men coming towards the other end of the village, taking the pressure off of Reno’s men.  Cheyenne and Hunkpapa Sioux together crossed the river and slammed into the advancing soldiers, forcing them back to a long high ridge to the north.  Meanwhile, another force, largely Oglala Sioux under Crazy Horse’s command, swiftly moved downstream and then doubled back in a sweeping arc, enveloping Custer and his men in a pincer move.  They began pouring in gunfire and arrows.

As the Indians closed in, Custer ordered his men to shoot their horses and stack the carcasses to form a wall, but they provided little protection against bullets. In less than an hour, Custer and his men were killed in the worst American military disaster ever.  After another day’s fighting, Reno and Benteen’s now united forces escaped when the Indians broke off the fight.  They had learned that the other two columns of soldiers were coming towards them, so they fled.

After the battle, the Indians came through and stripped nearly all of the bodies and mutilated all the uniformed soldiers, believing that the soul of a mutilated body would be forced to walk the earth for all eternity and could not ascend to heaven.  Inexplicably, they stripped Custer’s body and cleaned it, but did not scalp or mutilate it.  He had been wearing buckskins instead of a blue uniform, and some believe that the Indians thought he was not a soldier and so, thinking he was an innocent, left him alone.   Because his hair was cut short for battle, others think that he did not have enough hair to allow for a very good scalping.  Immediately after the battle, the myth emerged that they left him alone out of respect for his fighting ability, but few participating Indians knew who he was to have been so respectful.  To this day, no one knows the real reason.

Outraged over the death of a popular Civil War hero on the eve of the Centennial, the nation demanded and received harsh retribution.  The Black Hills dispute was quickly settled by redrawing the boundary lines, placing the Black Hills outside the reservation and open to white settlement.  Within a year, the Sioux nation was defeated and broken. “Custer’s Last Stand” was their last stand as well.

I know reading an account of a battle can be a bit dry without the benefit of actually seeing the place where it occurred.  In this instance, Last Stand Hill was some 4-5 miles away from the barren hills on which Major Reno and Captain Benteen and their 400-odd troops were besieged.

The centerpiece is what has become known as “Last Stand Hill” 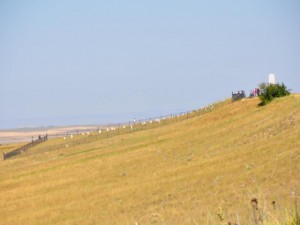 a knoll where General George Armstrong Custer and approximately 41 men (including his son, Tom, one of his brothers, his brother-in-law and nephew) made their doomed last stand.  White marble monuments mark the locations where the remains of each of the men’s bodies were found … as is the case for the locations of where all of the 260 soldiers (many identified by just Soldier” as the remains were not identifiable when located just two days after the battle) 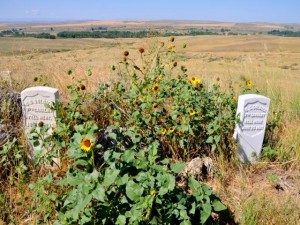 and Indian scouts died across the 5 mile long battlefield. 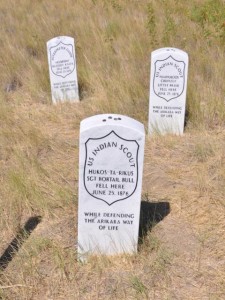 Custers’s stone is one of the only ones which is uniquely identified. 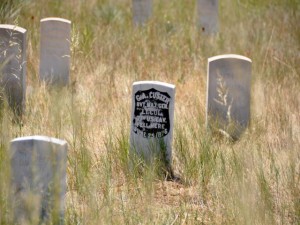 A short distance from Last Stand Hill, are the remains of Captain Miles Keogh and the forty men of his company who were wiped out by a group of Indians led by Crazy Horse. 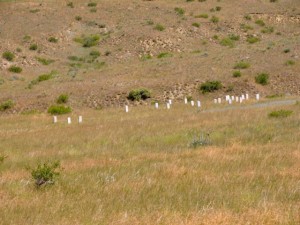 Interestingly, Keogh’s was so respected for his courage during the battle with the Indians that overran his position that his body was one a very few which was not mutilated after his death. Also ironic, as that Captain Keogh’s horse, despite receiving numerous bullet wounds, survived the battle and lived a long life … his name was “Comanche”.

Less than 15 months after the battle at the Little Big Horn, Crazy Horse was killed while in the custody of U.S. Cavalry troops at the age of thirty-six … coincidentally the age at which Custer perished.  Sitting Bull, after surrendering to U.S. authorities and subsequently touring with Buffalo Bill Cody’s Wild West Show, was shot by an American officer after being rearrested in 1890 at the age of 59.  Both Captain Benteen and Major Reno suffered what today would be called PTSD, became alcoholics, and were eventually forced to retire from the army.

Atop Last Stand Hill is the official monument for the 7th Cavalry honoring all identifiable soldiers, officers, the civilians that accompanied them, and Arikara and Crow scouts that lost their lives in the attack.  Most of the enlisted men that died on June 25th 1876 were buried in a mass grave beneath this monument. 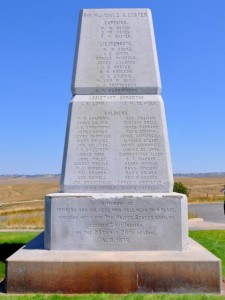 In 1999, the first of less than half-dozen red sandstone markers began to be erected to some of the key Indian warriors who also lost their lives on June 25, 1876. 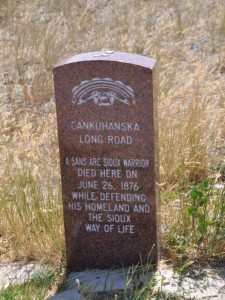 Another memorial was erected to the horses of the 7th cavalry many of which were shot by their riders so as to provide some measure of protection and cover against the onslaught, all of whom are buried in a mass grave. 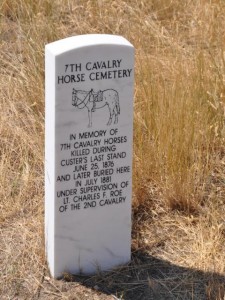 On December 10, 1991, President George Bush signed legislation to change the battlefield’s name from “Custer” to “Little Bighorn” Battlefield National Monument and to create the Indian Memorial.  The law authorized a national design competition, construction of the memorial, and acceptance of donations.

The theme would help “encourage peace among people of all races,” as required by the law.

The Indian Memorial stands 75 yards northeast of the 7th Cavalry monument, a circular earthwork carved gently into the prairie.  Panels on the interior of the memorial list the known Indian dead … both those scouts who fought with the U.S. Cavalry and those from the victorious Indian tribes who conformed and defeated the 7th Cavalry at the Little Big Horn. 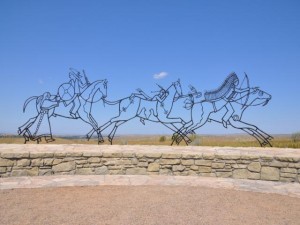 Visitors inside the memorial see a view of the Cavalry obelisk through a “spirit gate” window. The spirit gate welcomes the Cavalry dead symbolically into the memorial’s circle. For many tribes, a circle is sacred, and it remains open for ceremonial events. The surrounding walls carry the names of those who fell here as well as the words of some who fought in the battle.

Enroute back to our campground, and just outside the Little Big Horn Battlefield National Park are a church and casino sign beside one another. 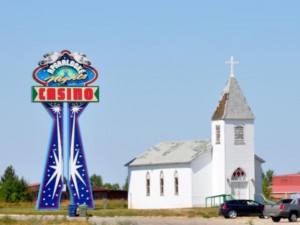 Before returning to our motor home, we took a swing through the downtown area of Hardin, the community in which our campground is located.  Situated on I-90 in southeast Montana, this town of just 3,505 (2010 census)

As an anecdote, in 2004-05, a Texas prison and jail development consortium convinced Hardin’s industrial development authority to float bonds to build the speculative Two Rivers Detention Facility,  a $27 million jail designed for 464 inmates, located on a 40-acre field … less than a mine from our campground.   The facility was slated to open in July 2007 but the state of Montana did not approve it.  The Authority bonds defaulted on May 1, 2008 and the consortium’s contract terminated in January 2009 without any prisoners ever being housed in the jail. In January 2010 the Two Rivers Board hired its fifth director. A reserve fund of $814,000 was earmarked to maintain the building for possible future use. It has remained complete and vacant for over five years. 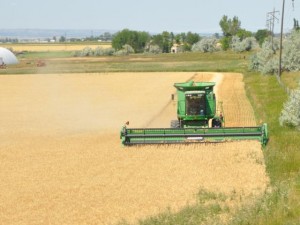 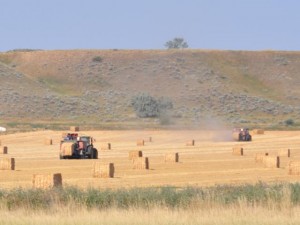 Together with the infrastructure to store and ship the local crops to major markets. 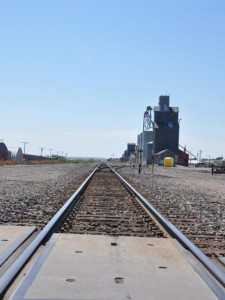 There was the requisite old hotel 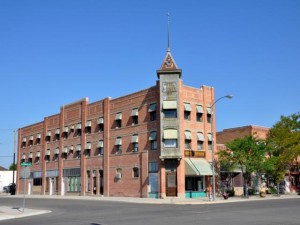 And an old train depot … currently serving as the home for the local Chamber of Commerce. 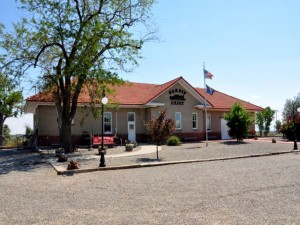 Located beside the depot building is one of just two surviving train cars from the 1964 Territorial Centennial Train commemorating the creation of the Montana Territory and honored 75 years of statehood.  The State commissioned 30 train cars with scenes intended to lure tourists to Montana.  Eight months later two artists had painted murals on 14,000 square feet of plywood. 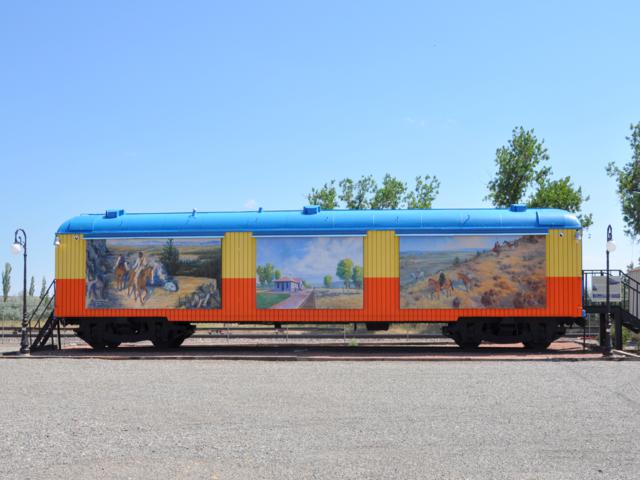 The Centennial Train made the epic public relations journey from Montana to New York, hosting presidents and governors and awing 380,000 at the New York World’s Fair (which I attended).  When the Fair ended the train returned to Montana and the 30 train cars distributed to communities, large and small across the State.  Some were abandoned in wheat fields, their large painted panels now faded by the sun.  The Centennial Car situated in Hardin is one of only two surviving Centennial Train cars in Montana.

Other artwork and artifacts around the train depot include: 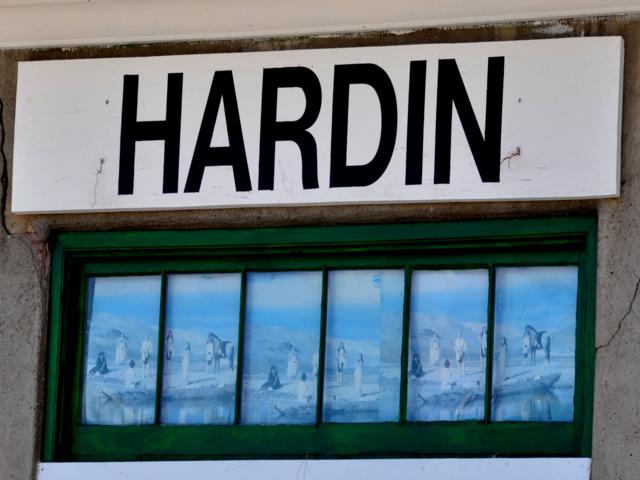 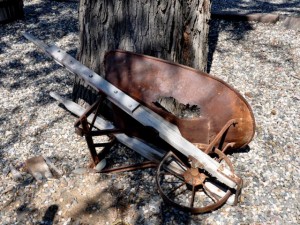 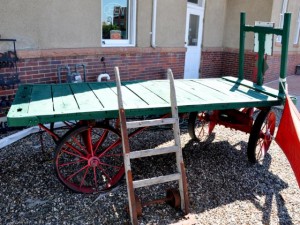 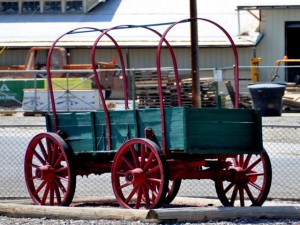