When we awoke to 46o temperatures, overcast skies and a stiff breeze, our long-anticipated plans for biking around Mackinac Island, about which we had heard so much left us second guessing.  Nevertheless, we packed, dressed warmly and packed extra jackets, hats and gloves in our day backpack and left for the ferry landing.

Once aboard with our bikes … the only means to getting around are by foot, horse-drawn carriages or by bike (there are two motorized vehicles, one police cruiser and one ambulance … which believe it or not actually were involved in an accident with each other); we suddenly realized we’d left something running on our motor home and left before it sailed to remedy the situation.  An hour later, we were back aboard for the 20 minute crossing in a high-speed hydro-plane hulled vessel which threw up a huge “rooster tail”. 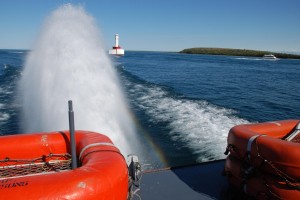 By the time we arrived, the sky began to clear and temperatures were on the rise.

Upon disembarking, the lack of cars was quickly apparent. 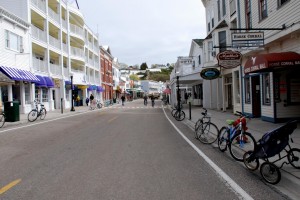 Along with literally hundreds of bikes all over the island, the main “public” transportation was … 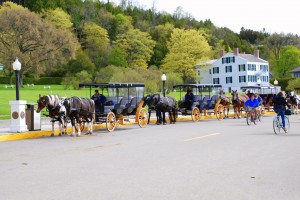 We started out to bike the 8 mile Lake Shore Boulevard which circles the island.  The first of the major sites we spotted was Saint Anne’s Catholic Church. 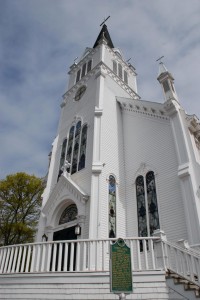 Next was the Mission House with its extraordinary tulip gardens. 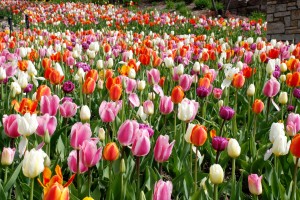 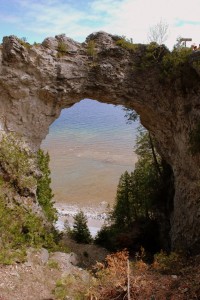 which also afforded some great views for the island’s coastline. 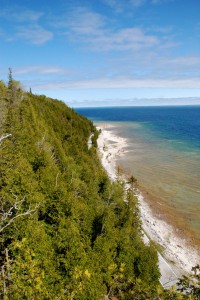 Mackinac Island’s shoreline is composed almost exclusively of … not sand … but millions of small rock, warn smooth over the millennia by the action of the lake water and ice. 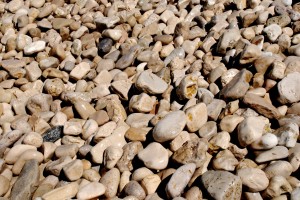 About 2/3 the way around the island, we decided to cut through the center, passing battlefields dating to the War of 1812; a golf course originally built in 1898; Catholic, Protestant and military cemeteries;  the Michigan Governor’s “summer” residence; and the absolutely spectacular Grand Hotel. 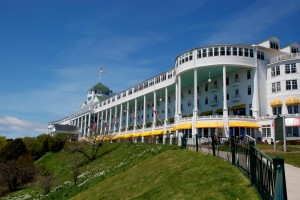 Built in 1887, it boasts a 660’ promenade porch which overlooks gardens, fountains, 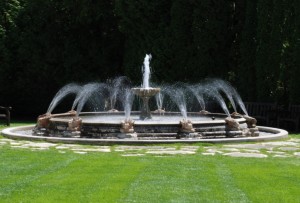 and the Lake and Mackinac Straits Bridge. 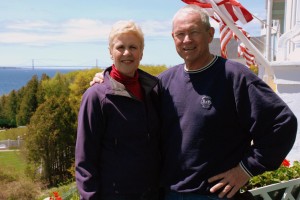 Finally we arrived back in the main part of town and biked past small churches, a courthouse where a 1904 case became a precedent when the State Supreme Court overturned murder conviction, declaring that killing in self-defense was justified, and what is believed to be the oldest still-standing home on the island (with property deeds dating to 1780). 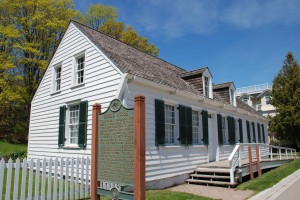 We then enjoyed ice cream and coffee.  Like most vacation destinations, people watching was also in vogue.  While I missed a chance to snap a picture of the father with his very young child being carried in the basket on the front of his bicycle, there were more than enough other folks of all sizes, shapes and in various outfits to keep us amused.  Two of our favorites, however, were: 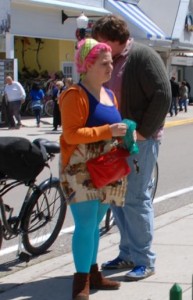 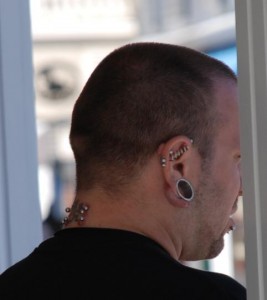 After catching a ferry back to the mainland, we grabbed dinner at a local restaurant before returning to our RV.  They are predicting frost for tomorrow morning.  However, such an inconvenience seems trivial next to the devastation we’ve witnessed on television in Joplin, Missouri last evening and today in Oklahoma.

1 Response to May 24 – Mackinac Island