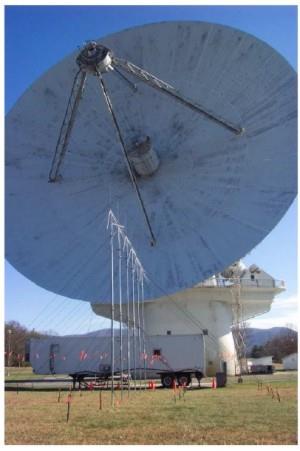 Completed in 1965, it is the largest equatorial mounted telescope in the world. It was the NRAO’s primary telescope until its retirement in 1999. Its accomplishments included the first detection of a polyatomic molecule in the interstellar medium and about half of all the known molecules in outer space which have transitioned at centimeter wave lengths.

It also first detected the H1 absorption arising from another galaxy. Anecdotally, a number of years ago, the telescope was angled on its side so that its computers could be updated by technicians on a raised platform … and when they had some problems, the men let loose with some “earthy” language. Shortly thereafter, the NRAO commanding officer received a call from a Methodist church where the women working there were complaining that they heard every word uttered by the techs. It seems that with the telescope on its side, its parabola shape focused the technician’s words at the church. Soon afterwards, a shack was constructed on the platform to prevent a similar incident in the future.